You’ve seen the video of Shia LeBeouf freestyling by now right? The footage of the Transformers star awkwardly spitting lyrics, in what looks like a summer camp from an 80s horror movie, has already gone viral as the latest instalment of LeBeouf increasingly cray behaviour. But now he’s called out for biting other MCs rhymes. 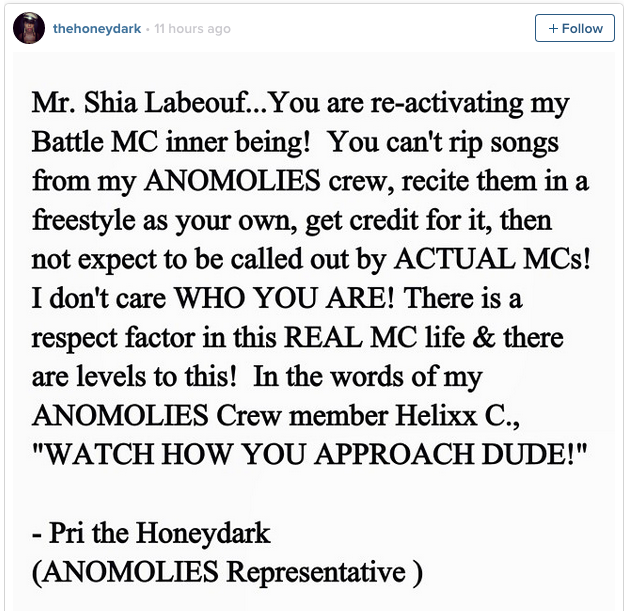 Rapper and producer Pri the Honeydark of New York crew The Anomalies has taken to Instagram, saying he stole lyrics from their 1999 track ‘Perfectionists

At 0:45, they spit “I recon you want more of that rare commodity/the quality is what it’s gotta be/ and my philosophy is much farther than what your eyes can see.”

And at 2:23 here, Shia drops “The rare commodity, the quality is what it’s gotta be, and my philosophy is farther than what your eyes can see.”

In 2013, LaBeouf’s short film 'HowardCantour.com' was found to steal the plot and dialogue from a story by cult cartoon Daniel Clowes

Shia even put the Cease & Desist letter of Twitter