"Hey, what's up?" I grumble to the stranger on the other end of the phone.

"WAKE UP WAKE UP WAKE UP WAKE UP!" he shouts back, which, not surprisingly, does the trick. I laugh it off, though I can tell the dude's perversely having fun with this. We make small talk about where we're from—he's from the United Kingdom, I'm from Los Angeles—until a beeping noise interrupts us. We wrap up our goodbyes, and just as quickly as it happened, we're cut off a few seconds later.

This is what mornings are like with Wakie—the app that wants to replace your smartphone's basic alarm tones with anonymous conversation.

Wakie started as a website in Russia back in 2011 and dropped on Android and Windows Phone earlier this year; the iOS version launched this month, after getting rejected by the App Store on its first attempt. To use this "social alarm clock," users submit their phone number, age, and gender, and then pick a nickname. From there they can either set an alarm to get woken by another Wakie user (an automated call from a woman with a European accent will be sent if no one is available) or they can request to wake someone up who has an alarm set for that time. This is all done anonymously. Phone numbers aren't swapped, and calls are kept at a 60-second limit.

A phone call in the morning is like a cup of water to the face. The feeling differs when it comes to a call from your S.O. or your parents, but with an unknown number, there's a mixture of suspense and, well, the need to get your shit together so you don't come off as a bumbling idiot. Engaging with something—or in this case, someone—might actually be a great way to jumpstart your mental engine. 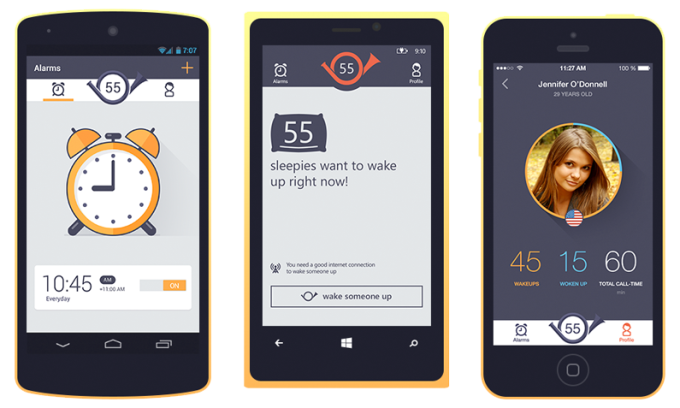 “This started as a way to fix my own problem," says Hrachik Adjamian, Wakie's 29-year-old CEO and co-founder​, "because no alarm clock could wake me up in the morning." Adjamian​ started a website-coding business as a teenager, which lead to clients calling him at all hours in the morning. Over time he realized that after each call, he couldn't fall back asleep. That's when the idea hit him. "I thought that if these calls weren't about about business but were from friendly people who just wanted to talk and make you happy that morning, that would be great," says Adjamian. "Five years after that, I decided to do it."

“I knew it was too early for it, it was too strange of a thing," he says. "The world is not ready for this, and I was not ready, too. I wasn’t an entrepreneur. I was too young."

Adjamian, who's originally from Armenia, says that during Wakie's launch in the App Store this month, it amassed 100,000 downloads in nearly a week (bringing it up to 250,000 app users) and recently hit a record 25,000 alarms in a single day.

There's definitely a steady stream of people using the app. Each time I set an alarm, someone woke me. But, after all, I could just let the alarm ring and drift back to sleep. I was often tempted to do that, but since I didn't want to mess around with my phone to set another alarm, I picked up. One morning, there was a chill guy who proudly yelled that he was from Africa; another morning, a group of drunk friends from South France who just started using the app the night before. The calls are pleasant, funny, and strange enough to keep the appeal.

The first user I called was an 18-year-old from England. I made a game-time decision to yell "TIME TO WAKE UP!" when he answered—"Hello" didn't feel like enough. "Thaaanks duuude," he replied, trying to cut our talk short. I think he expected a girl on the other end. You're welcome for the call, man.

Another guy forgot that he set an alarm and just asked "Who's this?" and hung up.

Later I woke up Molly, who's also in Los Angeles. "You're from L.A.?!" she asked, surprised. There was some flirtation, but we got cut off while she told me about how someone called her and pretended they were from the future.

This is probably what the voice in your head is saying right now: I'm totally going to use this app to hook-up. Wakie has a community board where people can post comments and others can respond, so it's common to see people trying to match up with the stranger who called them. Or people trying to get users to add them on Snapchat or Kik. Or thirst threads, like these: 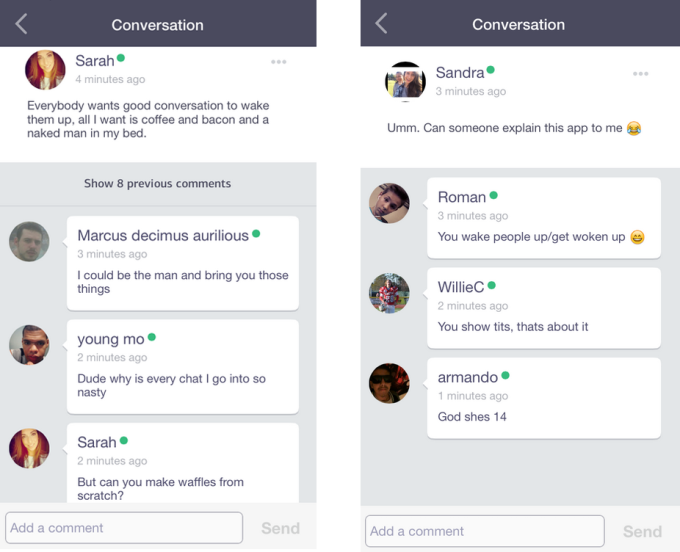 Don't get too excited—turning Wakie into a dating or hook-up app, a la Tinder, isn't going to happen. "We try to keep this a very bad place for dating," says Adjamian. "If you just want to use Wakie as an alarm clock, but you receive calls from people who are trying to date you, you’ll be unhappy with that. You don't want to use that kind of alarm clock. We could make it a more comfortable place for dating, but we won’t do it."

Wakie, as it is now, won't replace my default alarm on my iPhone. It does remind me of the initial excitement that came when Chatroulette got big. Everybody wants to know where you're from, and vice versa, before you move on to the next person. Sometimes, though, that excitement can be tiring when the purpose is to get you out of bed. Where I find Wakie most fun is when I call people instead of being called, which can happen nearly anytime you want. When I told a group of friends about the app, we all called people for five minutes straight—just like I did with friends on Chatroulette back in the day.

Adjamian plans to move his team of 13 from Union City in California's Bay Area to Palo Alto. They're looking for new investors to help secure footing in new countries. As of now, Wakie is fully operational in six places: the United States, Canada, United Kingdom, Ireland, Hong Kong, and Singapore. People in other countries can wake people but can't set their own Wakie alarm.

Though he won't divulge any specific numbers, Adjamian says that the company is paying for each call that goes through the app. They're looking to get VoIP (voice over IP) calling that allows them to make calls over the Internet, saving costs.

Wakie still has its bugs. It crashed on me a few times, and the connection wasn't always strong. Finding people to wake up sometimes took minutes, though the app said there were some available. Adjamian and his team are planning to work out all the kinks before they introduce a premium feature sometime next year that'll let people chat for up to five minutes. They'll also be able to check out the other person's profile (you can't do that now unless you find them on the community board). Personalized phone calls will include local weather information, different news stories, or a funny joke. Another planned feature will show just how much the struggle for sleep is real. "People always tell me that now they're waking up at the right time," says Adjamian​, "but they're going to bed too late. They want a call that says, 'Hey, you have to go to bed.'"

Who knew a future where we go to bed with a stranger and wake up with another would be to get more sleep, not less of it?

No More Sexting: Other Uses For Snapchat