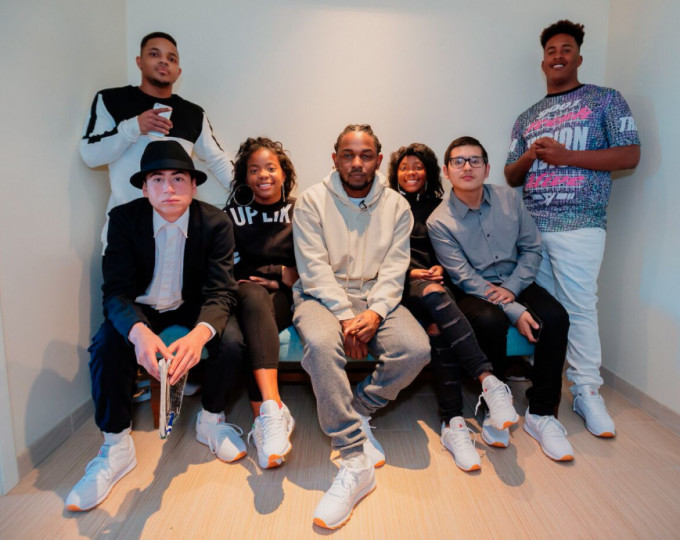 Kendrick Lamar has grown into both an acclaimed artist and a role model, inevitably becoming an unofficial spokesperson for the city that raised him: Compton. He’s been doing so much for his hometown, and his music and videos make it clear how much Compton means to him.

In February, it was announced that Kendrick Lamar would receive a key to the city. Compton mayor Aja Brown explained: “He represents Compton with great pride and I am honored to present him with the Key to the City, which symbolizes our deep appreciation for his philanthropic work and commitment to our community. Mr. Lamar’s achievements further Compton’s legacy of ingenuity and excellence.”

So it should come as no surprise that the rapper brought along several high school students from his former high school—Centennial High School—for this year’s Grammy Awards ceremony. In the video below, you’ll see the students anxiously awaiting their meet with Kendrick, as well as asking the rapper about his musical influences.

“Seeing them out here reminds me of where I come from,” Kendrick says in the video. “In the next 10 years from now, hopefully they’ll be further than where I’m at.”

To get a better idea of the connection between Kendrick Lamar and the community of Compton, we talked to Centennial High School principal Douglas Brown, who explained how students were selected to join Kendrick at the Grammys. “We looked at academic achievement, as well as hoped to motivate them to do better both in school and in the community,” Brown said. “We also wanted to encourage their interests in the arts, specifically the spoken word.”

In regards to Kendrick’s impact, Brown said that he is impressed with what the rapper has accomplished. “He’s bringing controversial issues to light. We have to have people like Kendrick and Beyoncé to keep people conscious of these issues, even though we’ve made plenty of progress in America.”

He gives a good and accurate portrayal of what goes on here, and no matter what happens, like Kendrick says, ‘We gon’ be alright.’

The principal even stated how some of his students have talked to him about the rapper’s other material, including his major label debut Good Kid, M.A.A.D City. “They explained Good Kid, M.A.A.D City to me,” Brown said. “I see a bunch of good kids every day here and I can only imagine what they go through outside of Centennial High School. But when they see someone like Kendrick, they get inspired.”

As someone that grew up in South Central Los Angeles and has since become a part of the Compton community, Brown strongly supports Kendrick’s message and his vision.

“He gives a good and accurate portrayal of what goes on here, and no matter what happens, like Kendrick says, ‘We gon’ be alright.’”