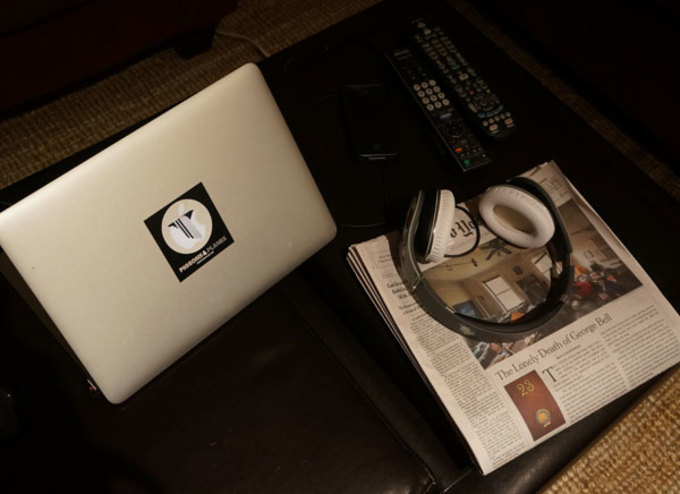 Photo by Jacob Moore, in my apartment, as I write this

When I started Pigeons & Planes in 2008, I didn’t even know what the word “blog” meant. I only started the site because Eskay, from my favorite website Nah Right, stopped responding to my requests for a job. I had absolutely no idea what I was doing. My marketing plan involved going to the most popular music videos on YouTube and commenting: “PIGEONS AND PLANES. GOOGLE IT!”

I have no idea if anyone found the blog that way. I still think it was a decent idea. Back then, things were different. This was before social media was the lifeblood of any online publication. Back then, a spot on a blogroll (remember those?) was more important than a social media presence. Back then, there was an actual community of music blogs. If I needed help setting up some new plug-in, I’d just email Modi from DC to BC, or Legend from OnSmash, or Will from We All Want Someone To Shout For, or Luis from Pretty Much Amazing. We all shared ideas, strategies, and, of course, music. Back then, if you wanted to keep up with hip-hop, you needed to follow Nah Right, 2DopeBoyz, XclusivesZone, and OnSmash.

In 2008, the small start-up blogs were the ones keeping up with music in real time. They were posting 20+ times a day, engaging with the latest social media communities, and covering new music with an urgency that the internet demands. The major publications still hadn’t caught up. They were focused on bigger projects with longer turnaround times. They had not yet learned to move at the speed of the internet. In 2008, I started Pigeons & Planes with no intentions or master plans. I had no resources, budget, or know-how, but I also didn’t have any old practices to unlearn.

That same year, Brendan Frederick, who was Deputy Editor of Complex at the time, called the entire Complex edit staff together and announced something that would immediately change the company forever: “You’re all bloggers now.”

For years, blogs dominated the music space on the internet. Among the larger media outlets, Complex was early to realize that they needed to change their ways if they wanted to keep up. It took a few years, but the entire business model changed.

“The reason Complex was able to succeed in the digital space when so many others failed,” Frederick explains, “is because Complex was smart enough to develop a real business model for making money off of the web—the media network. This allowed Complex to fund additional heads dedicated to the web, and made it less risky for them to divert editors’ attention away from the magazine. Other magazines didn’t change their business model—they stayed focused on selling print ads and doing events—so they didn’t have the cash to hire additional web staff, and couldn’t risk diverting attention from the print magazine. So, for these companies, the best they could do is have one or two separate ‘web editors’ focused on the website, but because they didn’t have the underlying revenue model, they could never fully make the shift.”

In that time of uncertainty and transition between 2006 and 2010, it seemed like music blogs were a permanent fixture. If you wanted to keep up with new music, you had to follow the best blogs.

This is often how things play out when a new, affordable technology is introduced to any industry. The smaller, more nimble organizations are the quickest to adapt, but it’s only a matter of time before the bigger companies with more resources strategize, adapt, and take over. In that time of uncertainty and transition between 2006 and 2010, it seemed like music blogs were a permanent fixture. If you wanted to keep up with new music, you had to follow the best blogs. Not anymore.

A notification from the ICE: “This domain name has been seized.”

A lot has changed since then. For one, the recording industry stepped up its efforts in the battle against online piracy. In the late 2000s, copyright laws started getting enforced on the internet more strictly, and the mp3 download links stopped flowing so freely. The RIAA set their sights on illegal mp3s, and rap blogs were especially affected. At first, it was just takedown requests. Then demands. Then consequences. On Thanksgiving day in 2010, the U.S. Immigration and Customs Enforcement (ICE) seized the OnSmash.com domain. This was the beginning of the end for the old format, which was mostly free downloads and little attention to writing or creating original content. Being first on a Lil Wayne leak was no longer a sustainable strategy.

On top of this, social media took off. Twitter provided news faster than blogs ever could, especially once all major artists started using it. Before Twitter, if you wanted to know that a new song was out, you needed someone to tell you. As Twitter became more universal, fans began to connect directly with their favorite artists, and the need for a blog to regurgitate obvious new releases became far less important. Blogs needed to expand their roles—either by discovering music, staying on top of the news, delivering a highly curated experience, or providing original content. Today, the most popular music destinations on the web are offering some combination of these things. Some independent blogs managed to evolve past the mp3 era, but competing with major media outlets in the new landscape takes resources. Without a full staff of writers, reporters, and social media experts, it’s difficult to stay afloat.

Some independent blogs managed to evolve past the mp3 era, but competing with major media outlets in the new landscape takes resources. Without a full staff of writers, reporters, and social media experts, it’s difficult to stay afloat.

And so the small sites fade away, and the big get bigger. New blogs come and go or remain as inconsistently updated passion projects, but there is very little middle ground these days. Just this week, it was announced that Pitchfork was acquired by Conde Nast, the media company that owns GQ, The New Yorker, Vanity Fair, and Vogue. Most of the bloggers that I came up with have moved on. Some went on to work for bigger websites, some went into the music industry, and some applied their highly specialized internet skills in other ways. 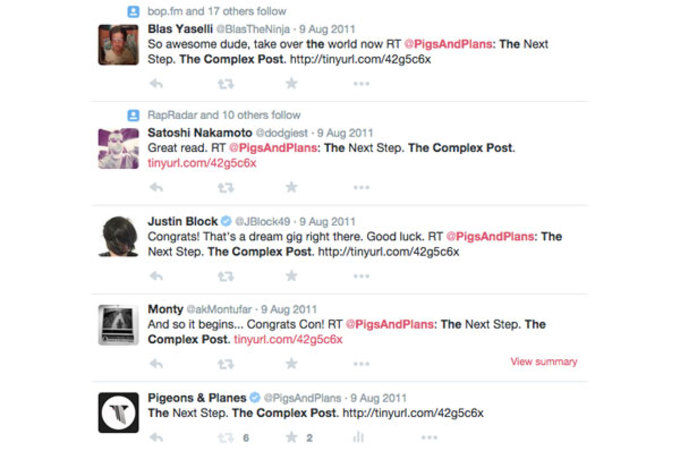 Tweets from the day after Complex bought Pigeons & Planes

By 2011, Pigeons & Planes had become an almost full-time job. I was still in school, making some money from blogging thanks to the Complex Media Network, who handled all the advertising on the website. I still owned the site, but they negotiated ad deals across the network of a few dozen websites at the time—deals that I could never get as an individual. But I was at a critical point. As graduation loomed, I either had to commit to this and get the resources necessary to grow, or I needed to stop trying to compete.

In mid-2011, I sold Pigeons & Planes to Complex. The deal came with a full-time job and the resources needed to run P&P from the Complex office. When I sold our homegrown blog, I got called a sell-out—no shit; we literally sold out—but the truth is, we would have faded away like so many other music blogs had we not been given some form of backing. By the end of 2012, Pigeons & Planes was more popular than ever. With a small full-time staff, we’ve been able to grow each year and shift from mp3 blog to a site with original content and thorough music news coverage. We’ve also been able to expand into things like video, live events, and merch (much more of that coming soon).

Maybe those passionate and savvy entrepreneurs who would have started a music blog five years ago will find a new lane to occupy.

I don’t know what’s next for Pigeons & Planes, and for music blogs in general. I know that five years ago, I couldn’t imagine being in the position we’re in. I’m sure in another five years we’ll be in another position that I can’t imagine right now. Music streaming is changing the way we consume music, and it’s affecting the entire industry. It’s undoubtedly going to open up some doors and it could mean another big shift in the way we cover music. Nobody has quite figured that out yet, and even the corporate behemoths like Apple Music, Spotify, and TIDAL are struggling to balance good ideas and sustainable execution.

The title of this post was going to be “Why You Shouldn’t Start a Music Blog in 2015,” but halfway through I realized something: fuck that. If you read all of this and still want to start a new music blog in 2015, you should do it. Who knows what the next wave will be. Whatever it is, you’ll have the upper hand, because you won’t have any old practices to unlearn.

Maybe the end of blogs as we know them is just part of a more complicated evolution. Maybe those passionate and savvy entrepreneurs who would have started a music blog five years ago will find a new lane to occupy, leaving the big corporations scrambling once again, trying to figure out how a bunch of random internet kids are doing shit more efficiently than they are. Wouldn’t be the first time.