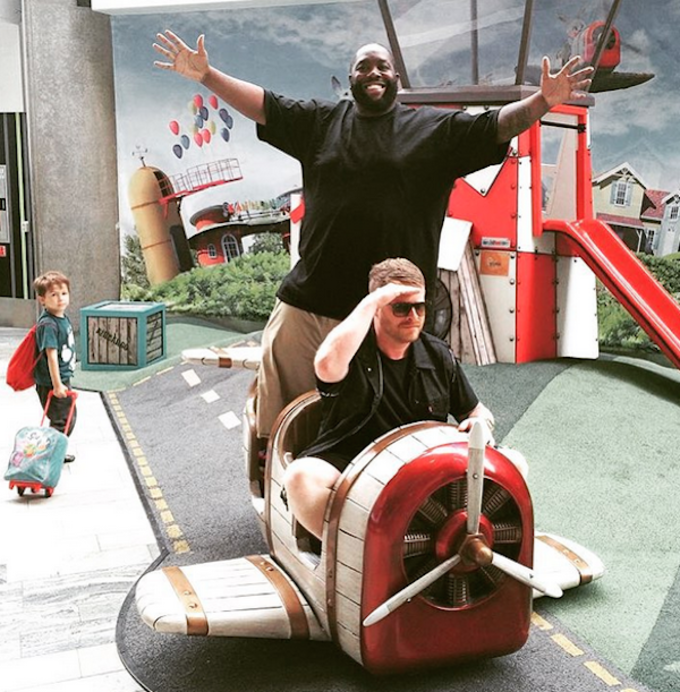 Banksy just announced a pop-up art installation/theme park in England called Dismaland (get it?) that will be open starting today through September 27. With art from 58 different artists, and a series of performances by everyone from Massive Attack to Pussy Riot, the event has something for everyone — even Run The Jewels are getting in on the action.

To promote their performance at the dystopian theme park, El-P and Killer Mike were interviewed by the artist himself for the Guardian, with predictably off-the wall results. Mike talks about his dream theme park to play, the Six Flags Over Georgia. “Mostly because they used to have a teen nightclub called Graffiti’s,” he says. “I was there when I was a kid and that’s where I heard dope music and danced with girls from the suburbs after we snuck in.” Sounds pretty ideal.

El-P talks about the last YouTube video that made him cry, giving a very detailed description of the video (which we found for you) below: “When the two guys raised the lion and then set the lion free but they missed the lion and they visited it in Africa and the lion was now king of his tribe and had a wife and children but he recognised the two guys and ran up and hugged them and licked their faces. I wept like a baby.”

Rest the rest of the interview at The Guardian.