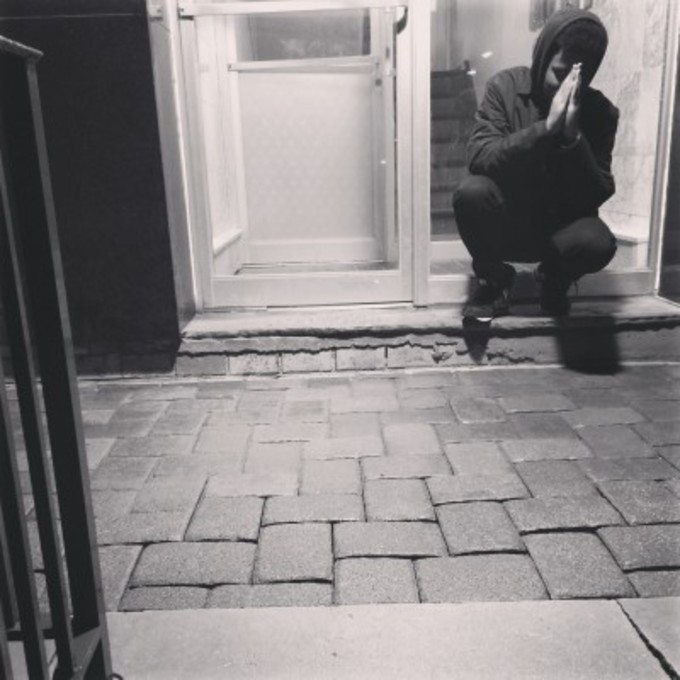 My first introduction to the producer Yume happened back in February when I was browsing through the P&P submissions. Someone emailed a remix of “Flower Child,” and it was pretty good, but the original version of the track was even better. Soon enough, we were all hooked. (Believe it or not, New Jersey has some rare fruits in its secret garden beyond the pop punk scene.)

This past month, Yume has been busy: On top of releasing Eternity+, he also co-founded a new collective called 95Sound. It’s taken him a few years to get to this stage, but this is only a subtle introduction of what’s to come. Today, we’re premiering Yume’s song “Pray Iv”, a collaboration with Michael Bailey.

Tell me the story of Yume.
Well Yume is the moniker that I chose to run with when I started releasing music on the internet back in 2012. Currently regretting that decision I really don’t like the name haha.

When did you start producing? How did you get involved with that?
I started making music when I was 14. I had just moved to to NJ from NY and I was really shy and didn’t go out or do much for a while so it was something to do in my free time (which was pretty much all the time). I had always wanted to dabble in music, my brother is an artist himself so I mostly followed after him at first and looked to him for advice and everything.

What instruments/apps/equipment do you use to make your music?
At the moment just a laptop with Ableton and a keyboard. Occasionally I’ll record samples with this shitty microphone I keep around. I used to work with a lot of midi instruments but I don’t always find myself wanting to plug them up whenever I have ideas that need to be sketched down immediately.

What’s your current environment like where you live, work and make music? How do you get in the zone/what inspires your work?
My current environment is interesting I suppose. Living in North Jersey there’s a little bit of everything, the city, the suburbs, the woods etc. I’m more of a naturey kind of guy so Im more attracted to the woody places that are more quiet and out of the way. I’m always taking everything in around me so I’m inspired by pretty much any/everything. Most if not all of my music is made in my room.

From what I’ve observed with your Internet presence, you seem active, but also reserved. Are you more of a private person or are you just more focused on getting your music known on the web?
I’m a pretty private person but every now and then I’ll make my presence known, I’m not as big on social networks as I used to be. There was a time when I was really concerned about my image on the internet and getting my music out in that way. But at this point I’m just more focused on finding myself as an artist and person on my own rather than getting popularity or attention anything. At the same time I realize that there’s people out there who like my music so I every now and then I’ll put something out for them to enjoy, but at the moment I’m not overly concerned about my internet presence I’m just living life.

I came across your work through a remix of “Flower Child” from 1995, which came out last year. Could you tell me about what it was like doing that for the first time? How did you figure everything out?
1995 was an instrumental mixtape. It never really turned out the way I envisioned it would so I’m not very high on it myself, but for what it was I appreciate it and I’m glad other people did too. I wanted it to be a really big project with more fleshed out songs and everything but somewhere along the lines I just got lazy, I guess, and got tired of working on the music and decided to get it out of the way and work on newer things.

Tell me about your most recent release, Eternity+. What was the process for putting that together? How did it come about?
Eternity+ was a collection of songs I’d been working on for some time. Pretty much the same situation as 1995 in that it was meant to be a much bigger project to me but I felt like I’d been holding myself back by working on the same music for so long. I’m happy with Eternity+ though, I wish I could say there was something much bigger behind it but there isn’t haha it’s more of an open to interpretation sort of thing.

How did 95Sound get started? Who’s a part of the collective?
It was originally myself, Patchley, Hideaway and MXRA. I had the idea in mind for a collective for a while but it was a matter of creating one with the right people. I’d known Patchley and Hideaway for a few years now and I’ve enjoyed watching them grow as artists and I knew if I ever wanted to start a collective I’d go to them, and I met MXRA last summer and was very impressed with him. There’s also Glo, Haven, Kareshi, Kamiya and Greeze Team (Yung Greeze and Remzi collectively) all of whom are very talented guys that I was looking forward to working with.

I’ve noticed that more artists are forming collectives after starting off solo rather than the other way around… Why do you think that is? What about being in a collective was appealing to you?
I always thought being apart of a group was cool, especially when it’s a group of people you connect with creatively. I originally wanted to be apart of a band because I was always interested in how bands come together with their ideas and formulate things. In this day and age the internet is like a new platform to reach out to people and work together, so you could pretty much start a band or a supergroup online with people all over the world and I find that very cool.

Volume 1 came out a while ago, when can we expect Volume 2? Or is the collective planning something else?
Well at the moment I suppose we’re all just doing our own thing. I guess you can say it’s sort of a hiatus, it’s been a pretty hectic period for everyone since we got Vol.1 out of the way so we’ll see what the future holds.

What are the goals you set for yourself as an artist?
If I were to be remembered for anything as far as being an artist I would want it to be that everything I did was true to me. My goal at the moment is to grow beyond being a producer. I enjoy making instrumental music but I’d love to work with singers and rappers and other artists in a more interactive way in the future.

At the same time I’d like to be mentioned in the same breath as those artists rather than being the guy who produced the beat or whatever, I want my work and effort to matter just as much as theirs would. I also feel like that scene is a tad overcrowded with SoundCloud booming the way it has in the last few years, so ultimately my goal is to stand out as much as possible. Not knocking anybody who wants to be a producer by the way, there’s definitely nothing wrong with wanting to do that.