With the box office success of Straight Outta Compton, the questions surrounding Eazy E's death from AIDS have come back into the forefront of discussions. Bone Thugs-N-Harmony recently talked about it, and how they've always thought there was some sort of conspiracy about his death from the disease.

Now, Eazy's own son, Marquise Wright​, is speaking out, and broke down his doubts about his father's death in a recent Instagram post. In the post, Eazy says that he always thought his dad was killed and hints that he thinks Suge Knight was involved in it. Eazy not only mentions his dad's encounter with Knight in the studio before he got sick, but also Knight's interview with Jimmy Kimmel, where he talked about infecting someone with AIDS. Read he full post below. 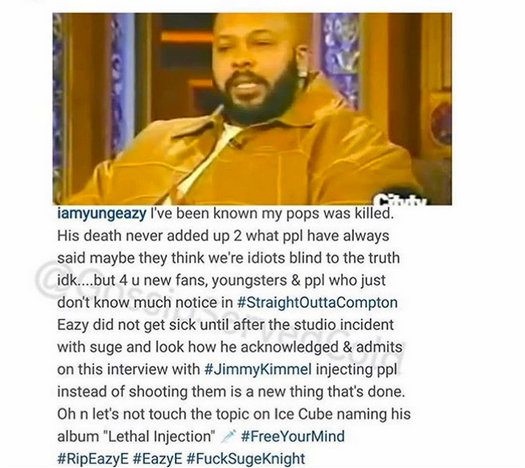