Kanye West is one of the headliners at this year's Budweiser's Made in America festival, and tonight, his high-energy show in Philly had everyone excited for both the ninth anniversary of Late Registration and a ton of cuts off Yeezus.

There was a bit of a bumpy start to "Black Skinhead" but he went on to perform "I Don't Like (Remix)," "Cold," "Can't Tell Me Nothing" and "New Slaves," and won the crowd back. "Good Life," "Heartless," "All of the Lights" (which 'Ye sarcastically called his biggest "underground" hit), and "All Falls Down" are just some of the songs that followed.

He also touched on Jay Pharoah's skits during the MTV VMAs, as well. "I called Jay Pharoah right after the MTV Video Music Awards and I said, 'You know, I appreciate your show, but let me tell you about my story, let me tell you what I went through to get to that position,'" Kanye said. "I'm not making it a black or white thing right now, but I'm telling you if you see a black guy anywhere, he had to work 12 times as hard, excuse me. So we're not going to have any black comedians going up on stage spoofing the people who are working hard to open doors not only for black people, but for any creators, beauty, truth, creativity, positivity and just helping the next man out with love, with love, with love, with love, with love."

After Kanye repeatedly implored the crowd to form a circle, mosh, and "push motherfuckers next to you," he closed the night with "Blood on the Leaves"—his second time performing the song that night.

You can stream his performance below, thanks to HHNM:

Set times for both LA and Philly tomorrow are listed below, as well: 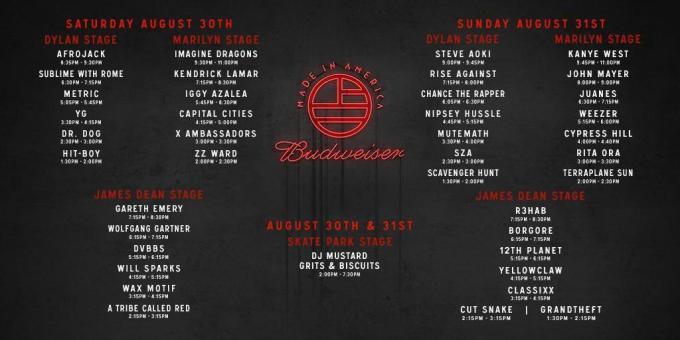 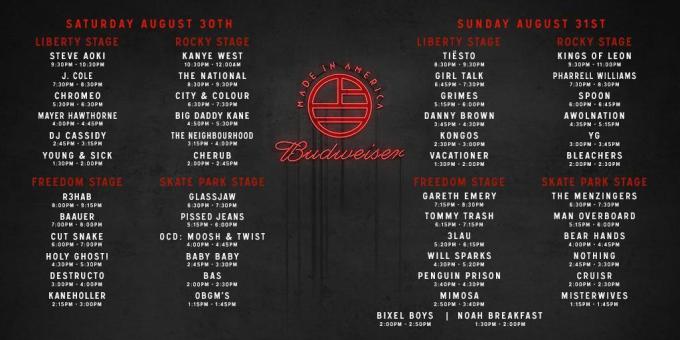 Live Stream Made In America Festival Day Two With Performances From Kanye West, Danny Brown, Pharrell and More
Kanye West Gets Another Magazine Cover
Here's the Lineup for the 2014 "Budweiser Made in America" Festival in Los Angeles
Feature
The 100 Best Kanye West Songs
NewsKanye WestMade In America
Newsletter