Over the weekend, a mysterious blimp with an Aphex Twin logo and "2014" on it flew over London, around the same time people started discovering Aphex Twin logos being stenciled around New York. Seeing as this was not reportedly happening in any other places, my thoughts were that there was some kind of tour or pair of shows (in London and New York) going down. Based on this new website that Clash reported on, it looks like this might actually be the Aphex Twin album we've been waiting on.

There's not much to the actual site: it has a seemingly-random set of characters before the dot-com (syro2eznzea2xbpi.com), there's a yellow Aphex Twin logo on the right side at all times, the above "foldface" picture, and loads of missing information on what looks like a track list: 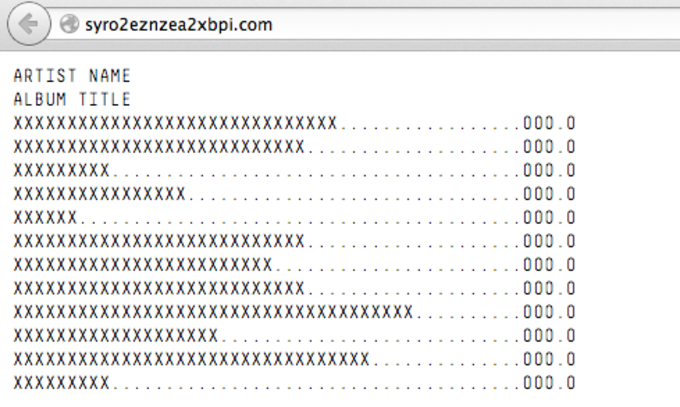 Can we assume this would be a 12-track album of some sort? If it's in fact a new Aphex Twin project, it will be his first full-length since 2001's Drukqs. We also can figure that it might be one of the six albums he says are completed.

For those who might be skeptical, know that this site is registered to Warp Records (by the same person who registerd drukqs.net), and Aphex tweeted out a similar URL (although we're wondering why he added ".onion" onto the end). We'll keep you posted on what all of this means when more information is made available.

UPDATE FACT says that the album's titled SYRO, and posted a screen grab with what appeared to be a tracklist and BPMs for each tune (it looks like you need a TOR browser/to be "deep web" savy to see this): 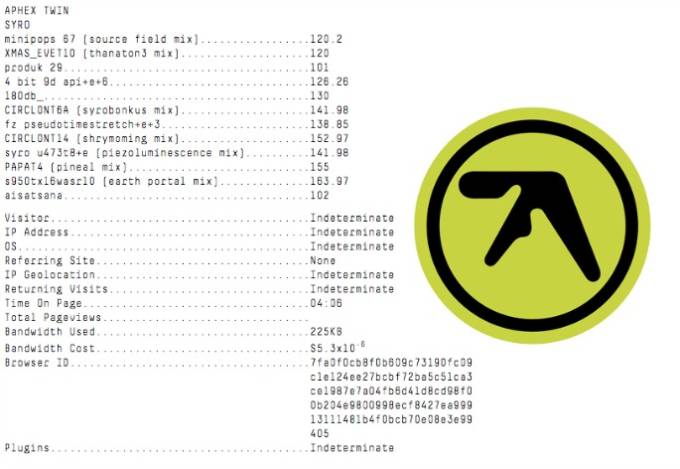