You know how DAD does; we're not fans of hearing that people's music has been stolen. And when we hear a new story about music being jacked, we have to investigate. Here goes: Earlier today, Parisian duo AGLORY has called out ETC!ETC!, accusing the moombahton/trap producer of stealing their track "Chromaggus" for his remix of "No Stopping Us" by Dirtyphonics, which dropped on Dim Mak just this week: 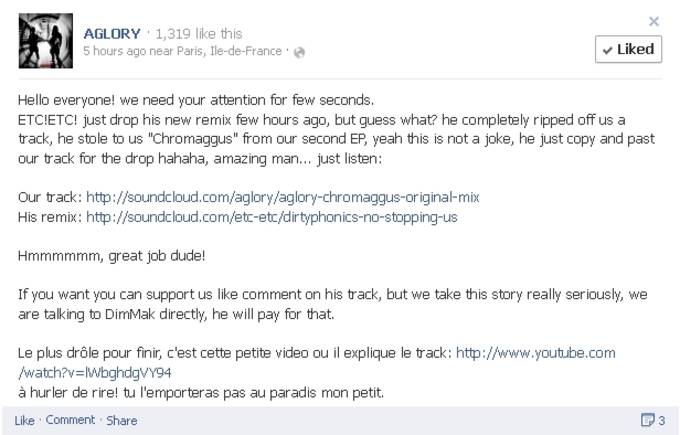 This would be an interesting development in an on-going series of accusations of stolen music this year, with everyone from will.i.am to Juke Ellington being caught up in some kind of music stealing scandal this year. The SoundCloud link of the remix to ETC!ETC!'s page had been removed, prompting us to check out his Twitter page to see if he made any comments, and found this tweet:

When we asked ETC!ETC! for his side of the story, he let us know that he'd not heard their track until today. He does admit to using a sample pack, which could have been the same one AGLORY used, and linked us with a couple of videos as proof of working on the track (where you can see the Ableton sessions):

This Vine, which was posted on June 4:

UPDATE Both ETC!ETC! and AGLORY have told us that they've spoken and reconciled their differences.

@DoAndroidsDance etcetc and us talked together, this story is now finished.