The ACLU recently released results of extensive records-requests that showed police were using third party products to track activists’ social media, in real time, based on geography. Furthermore, popular social media sites Facebook, Twitter, and Instagram provided third parties with access to user data at the time (who then marketed this data access to police).

While more attention has been paid to military-grade equipment police now possess, less emphasis has been placed on examining how police now monitor protesters and the general public. Recent reports have shown that police used products such as Geofeedia and facial recognition technology to monitor activists while actively targeting activists of color, the combination of which can lead to a higher probability of false arrest.

Johnetta Elzie, a protester and organizer who became known for both online and offline activism and organizing in Ferguson in August 2014, says that she wishes this surprised her, but it doesn’t. “If anything I know that my visibility now can cause police to react in a really aggressive way ... If I go somewhere where protests are happening, and say I’m there, the police are extremely aggressive towards everyone, and I don’t want to put people in danger of that. So usually I don’t announce where I am going or what city or protest, or anything like that.”

The ACLU’s records-requests found that “Twitter, Facebook, and Instagram provided user data access to Geofeedia, a developer of a social media monitoring product that we have seen marketed to law enforcement as a tool to monitor activists and protesters.” Emails from Geofeedia reps touted their access to this data, and also noted that one of the product’s features “covered Ferguson/Mike Brown nationally with great success.” 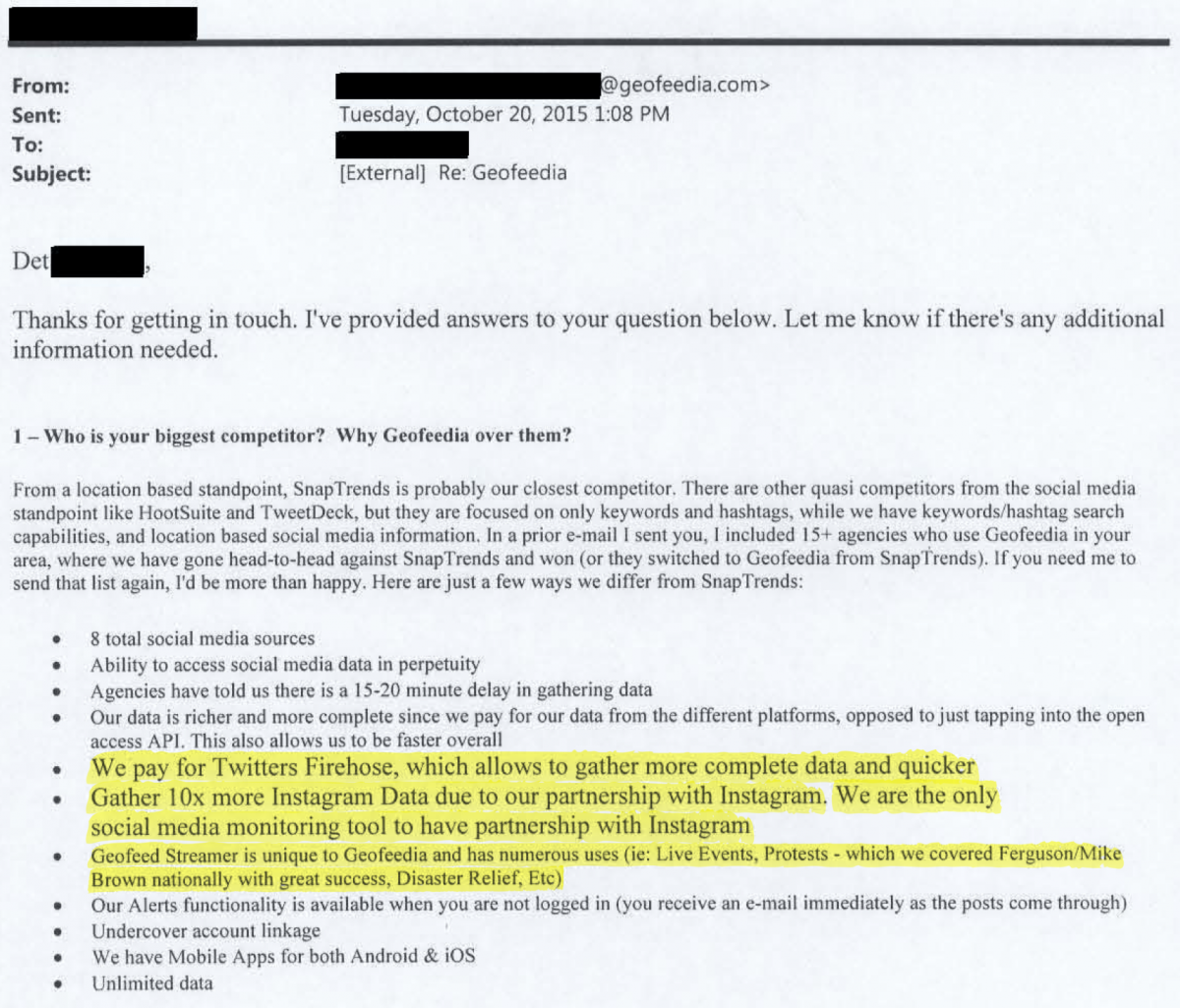 This technology is used to, among other things,  search for various hashtags including #blacklivesmatter and #policebrutality, while Geofeedia explicitly  refers to unions and activist groups as “overt threats.”

“Social media surveillance is bringing people into a web of surveillance,” says Nicole Ozer, Technology & Civil Liberties Policy Director for the ACLU of California. “They’re going into databases based on their First Amendment protected expression. Once they’re in those databases, you don’t know how those databases are going to be used. Are these databases going to be populating the databases that are then used to match up against facial recognition images? Because if so, now you're in a government database and a surveillance database.”

GeoFeedia isn’t the only company that provides the police with these sorts of tools.

Last year, the ACLU revealed that the Fresno, California police department was using another social media surveillance tool from MediaSonar that bragged about its capacity to identify “threats to public safety.” It did so by monitoring hashtags such as #BlackLivesMatter, #DontShoot, #ImUnarmed, #PoliceBrutality, and #ItsTimeforChange. These programs reveal a specific and honed capacity to identify people engaging in these discussions, targeting activists of color and explicitly naming them as threats.

In a previous case, a report from cybersecurity firm ZeroFox surfaced online and described Elzie as a "high" severity, "physical," and "#mostwanted" threat, and notes her "massive following" on social media.

While Twitter, Facebook, and Instagram have suspended Geofeedia’s access to their data, there are, as previously noted, other companies that boast similar capabilities. The Brennan Center for Justice at New York University found that at least 151 police departments, cities, and counties spend millions of dollars on social media monitoring software nationwide.

“Social media monitoring tools are a double-edged sword,” said Faiza Patel, co-director of the Brennan Center’s Liberty and National Security Program, in a statement. “They can be used legitimately to investigate crimes, but they can also target protesters and political opponents. Given the extraordinary power of these tools to reveal intimate information about millions of Americans, it’s high time to develop concrete safeguards against abuse.”

Social media monitoring tools are a double-edged sword. They can be used legitimately to investigate crimes, but they can also target protesters and political opponents.

Ozer’s reference to facial recognition exposes another element of how comprehensive social media monitoring can be.

During demonstrations calling for justice for Freddie Gray (who died while in police custody), Baltimore police used Geofeedia to gather images of protesters based off their social media profiles, and then ran those images through their facial recognition database.

However, the report’s authors note that “an FBI co-authored study suggests that face recognition may be less accurate on black people … Also, due to disproportionately high arrest rates, systems that rely on mug shot databases likely include a disproportionate number of African Americans.”

“I look at surveillance as the on ramp to the criminal justice system,” said Ozer. “And increasingly the broader touches that police have within innocent communities, and particularly how communities of color are over policed, and over surveilled, which means that more and more of the community members are wrapped up into these systems.”

According to 2011 and 2012 studies from the The National Institute of Standards and Technologies (NIST) have found some companies utilize algorithms that regularly performed up to 10 percent worse on African Americans than Caucasians.

This means that people of color are more likely to be falsely arrested or stopped when police rely on facial recognition technology.

People of color are more likely to be falsely arrested or stopped when police rely on facial recognition technology.

“I think it’s telling that there are just now stats being officially collected on police killings, but if we were to ask them what information they had on protesters in 2016, I feel like there would be multiple files on multiple black people in this country. Where is the honesty or justice in that?” says Elzie.

Methods of surveillance have expanded beyond what most Americans imagine, but in many cases, we never hear about new systems because there are no clear guidelines for oversight, and little—if any—community input. As we’re more engaged in charged conversations about racial justice, it’s important to understand just how much of a target for police activists of color have become, and the disparate impacts surveillance has on these communities.