In its Nov. 13 open letter, JT30 claimed that King neglected his duties as executive director of Justice Together. He insisted on managing all aspects of the organization, and refused state directors’ requests for him “to delegate tasks and responsibilities to ease his workload,” they wrote. According to Sheri Rubin, a former Illinois state director, King admitted to her that he was a “bottleneck.”

“He was the only one who had access and control to everything, and that becomes unsustainable when you’re trying to run an organization of that size,” Rubin, who worked closely with King in Justice Together, told NTRSCTN via Google Chat.

She said any small administrative tasks, such as email-address changes or invitations to Slack, a popular collaboration and chat tool, had to go through King, which inevitably led to delays.

we really couldn’t take direction or give direction that wasn’t okayed by Shaun.

The five former state directors interviewed by NTRSCTN, who had never met each other in person, described instances when King avoided questions about Justice Together’s direction.

“We were told to ‘trust the process’ and that work was happening ‘behind the scenes,’ but we were never privy to specific details regarding the process of King’s work,” said Miller, the former Virginia state director and attorney who volunteers legal services for women’s shelters.

However, according to the five former directors, King never explained what “the process” was supposed to be.

King wasn’t just a bottleneck when it came to mobilizing the coalition, JT30 said; they claimed he never provided answers, either. When state directors requested instruction from King on how to mobilize—whether that meant meeting with volunteers or auditing the police—they said he repeatedly told them to wait. Members of JT30 who spoke to NTRSCTN said they neither understood the delay nor the reason for the wait. 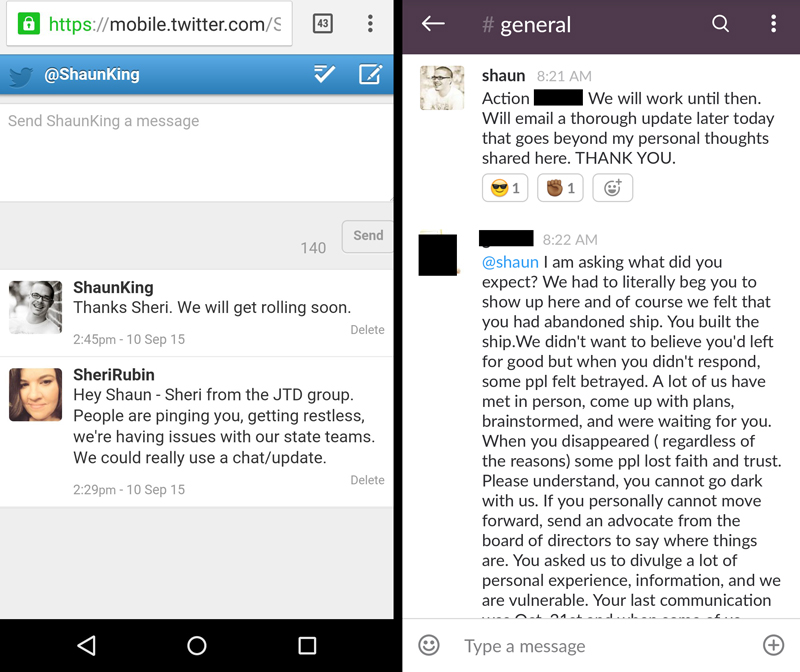 When members began questioning King, they claimed he was evasive, responding to them by citing his track record of successes with previous organizations and fundraisers, the apparently constant attacks he received from racist, right-wing antagonists, his workload with Daily Kos and Daily News, raising a family, and attending grad school.

“It was Shaun’s reaction to the questioning—the genuine curiosity about what it was we were embarking on, what we were being asked to do—that began to turn myself, and I’ll say others, off,” former Texas state director Pettie said.

The waiting game didn’t work for most Justice Together members, particularly those in Massachusetts. The eight directors there consisted of lawyers and nonprofit executives, people who weren’t new to social-justice activism. (Randolph, for instance, has been involved in the fight against police brutality since the Los Angeles Police Department killed his younger brother, Brayland, during a May 11, 2005, police raid on a friend’s house. His family ultimately sued the LAPD in 2010; the case was settled out of court.)

So when the eight Massachusetts directors met for the first time in July 2015, they concluded that they had the power to make meaningful change in no time.

“We realized that we had direct connections to police chiefs, commissioners, state representatives, the lieutenant governor of Massachusetts [Karyn Polito] … and to other organizations,” Randolph told NTRSCTN. “We could have really done a lot of things and made a lot of impact really quickly.”

From July through September 2015, Randolph said the eight Massachusetts directors wanted to act while they could still influence the state legislature’s decision to push for Boston police and state troopers to wear body cameras. But when they reached out to King, Randolph claimed, he blocked their efforts and told them not to act despite the opportunity.

“To this day, we do not know why he didn’t want us to begin work here, in Massachusetts, with the people we had, to do things we thought we needed to do to stop police brutality,” Randolph said. “We think it was a control issue.”

And its sudden disappearance wasn’t the only thing that caused members to raise their eyebrows.

“King has failed to explain why ‘JusticeThatsAll.org’ appears on [statements to donors] when volunteers intended to donate to ‘Justice Together,’ JT30 said in its open letter, referring to King’s defunct grassroots organization Justice. That’s All. (JTA).