While the John Ellis Bush campaign tumbles forward with its new approach of attacking Donald Trump for so-called "liberal things" he said in the past, actual Republican voters are still publicly claiming that President Barack Obama is a Muslim. According to a new survey from Public Policy Polling, 54 percent of the 572 Republican primary voters who participated in the poll actually believe Obama is a Muslim. Another 32 percent said they were "not sure," meaning just 14 percent of Republican voters believe Obama is a Christian.

Aside from the scathingly obvious fact that one's religious preference (or lack thereof) should have absolutely no bearings on his or her ability to govern a nation, the idea that two fear-mongering tactics of bygone administrations can still sway such a large group of people in the year 2015 is baffling. As expected, some within the Republican party are still actively fueling the fires of such ignorance by providing categorically vague answers to direct questions regarding the outgoing president's religious leanings.

In the spirit of kindness, here's a little bit of advice for those within this 54 percent: The internet is a real thing that actually exists. Anyone can use it to find the answer to any question imaginable. Before you spew it, Google it. Bing it. Yahoo it. Whatever. Information is free but ignorance is really fucking expensive: 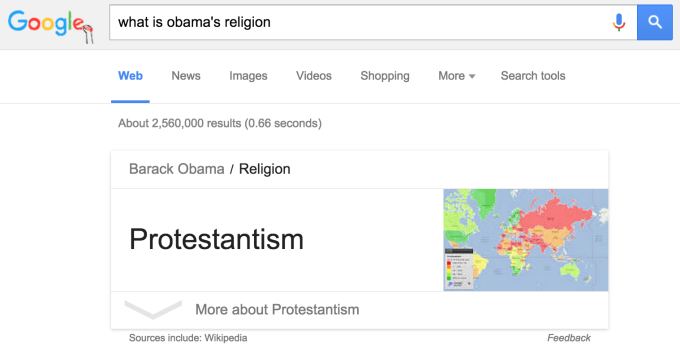