Star Wars: Episode VII has finished filming and the world is now 409 days closer to seeing J.J. Abrams' first installment of his planned trilogy hit theaters. While the cast and crew celebrated the film's wrap, Abrams, alongside producers Kahtleen Kennedy and Bryan Burke, decided to make the occasion a tiny bit more personal. The cast and crew received a note signed by the Abrams thanking them for their hard work and passion on the project. The note was tweeted out Friday and was shortly pulled, but Slashfilm rehosted the image. 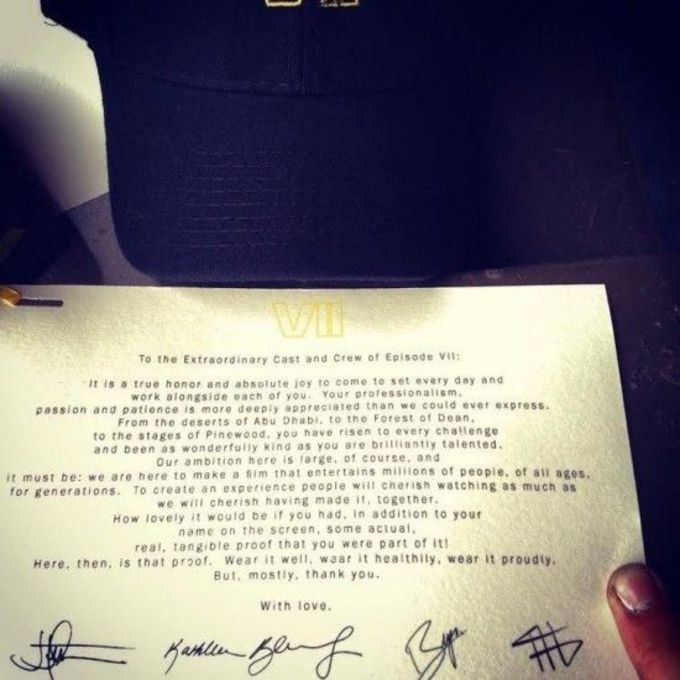 "To the Extraordinary Cast and Crew of Episode VII:  It is a true honor and absolute joy to come to set every day and work alongside each of you. Your professionalism, passion, and patience is more deeply appreciated than we could ever express. From the deserts of Abu Dhabi, to the Forest of Dean, to the stages of Pinewood, you have risen to every challenge and been as wonderfully kind as you are brilliantly talented. Our ambition here is large, of course, and it must be: we are here to make a film that entertains millions of people, of all ages, for generations. To create an experience people will cherish watching as much as we will cherish having made it, together. How lovely it would be if you had, in addition to your name on the screen, some actual, real, tangible proof that you were part of it! Here, then, is that proof. Wear it well, wear it healthily, wear it proudly. But, mostly, thank you.  With love, J.J. Abrams, Kathleen Kennedy, Bryan Burke."

Star Wars: Episode VII will premiere in literally every theater on the planet on December 18, 2015.