Breakups are hard enough without your significant other dying and coming back to life. Aubrey Plaza and Dane DeHaan, the stars of Life After Beth, know all about that. Written and directed by Jeff Baena (writer of I Heart Huckabees), the film tells the story of a grieving boyfriend Zach (DeHaan) whose recently deceased girlfriend Beth (Plaza) mysteriously resurrects. Only, she isn't exactly Lazarus. Undead Beth is stuck in the past, with no recollection of their relationship troubles before her fatal accident. Taking advantage of this, Zach does everything he can to fix all of their mistakes. That is, until he realizes that her memory sucks because she's slowly decomposing into zombie form.

The zom-com, which also stars Molly Shannon, John C. Reily, Matthew Gray Gubler, and Anna Kendrick, begins its limited theatrical run today, though it's already available to check out on DirecTV. But before you do, get to know more about the film from Plaza and DeHaan.

Aubrey Plaza: I related to the idea of going through a bad breakup and only remembering the good things—and then getting back together with someone based on that and having it be a disaster. The movie is a metaphor for that situation.

Dane DeHaan: I’ve been with the same person since I was a senior in high school, and now we’re married, so honestly I’ve never really had that bad of a breakup. The script obviously was a metaphor for a relationship falling apart, and that’s one of the reasons I really liked it. I could relate to a lot of the smaller conversations in it, like the “What do you want to eat?” conversation, that kind of thing, but the breakup part of it honestly not so much. 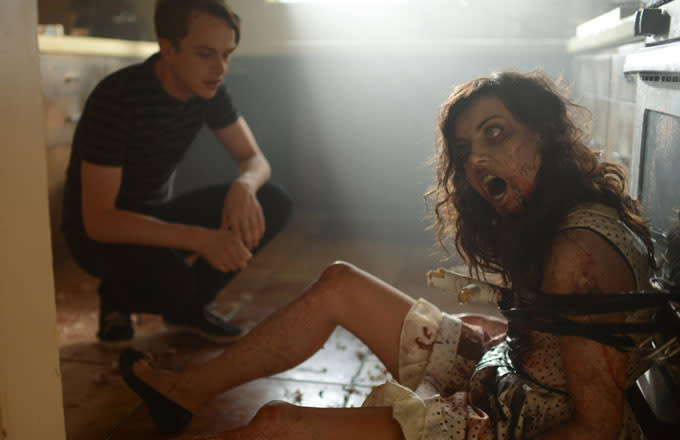 Plaza: I’d look at myself in the bathroom and freak out, and I’d be like “That was a great freakout. I can use that. Tomorrow.” Or, you know, I would do it at red lights just to freak people out. But Jeff [Baena] and I collaborated really well on all of the zombie behavior because he came up with some really fun things. We were doing a camera test for it, and he decided to add a weird thing where he had a flashlight, and he said, “Every time I put the flashlight somewhere, dart your eyes to follow the flashlight.”

On How They'd Fare in a Zombie Apocalypse:

Plaza: I'd be great in it because I’m a really good shot, and I’m not scared of anything, so…bring it.

DeHaan: I would fare pretty well 'cause I think I would be able to establish a pretty good team of people around me, which is ultimately the most important thing in the zombie apocalypse. [I'd use] a gun with a really long night vision scope.

On Throwing Down With Anna Kendrick:

Plaza: Any opportunity to get in a fight with Anna Kendrick is fun. No, we’re really good friends, so we worked together on Scott Pilgrim and she’s an amazing actress and so funny. I mean our scene is very short, but it was very fun. But Anna would win a fight. She scares me. She’s feisty.