Manhattan doesn’t have the radical focus on the ordinary of, say, Looking, or the genre-infused energy of Hannibal or The Americans, or the visual audacity of, well, Hannibal or The Americans. But for what it is—Chicago CW affiliate WGN’s attempt to stake a claim for making respectable television—the series is pretty much perfect. The show, created by Sam Shaw, has a few big names in the cast (namely John Benjamin Hickey and Olivia Williams) and a juicy period setting with built-in thematic resonance: scientists working to create the atomic bomb while isolated in the desert in the middle of World War II.

That assessment is also, admittedly, a bit of a backhanded compliment, mostly by design. In its rush to follow the formula set by Mad Men at AMC and put WGN on the board as a network that can make good TV, Manhattan forgets to do much that we haven’t already seen before. It’s yet another glossy period piece that’s carved out a particular thematic space and shows potential for slow-burning drama. Maybe it’s unfair to fault Manhattan for just being generally good TV, but at least in the pilot it’s primarily content to promise an explosion that might or might not come.

There are, to be sure, more than enough things to grasp onto for fans of quality TV. The direction by TV mainstay Thomas Schlamme is consistently inventive, particularly in its attempts to transform a bunch of people thinking into a visually exciting experience. Schlamme’s confidence extends to the writing of the main plots—primarily the conflict between teams led by scruffy, hard-bitten idealist Frank Winter (Hickey) and the pragmatic, machine-like Reed Akley (David Harbour) and their battle over golden-boy new recruit Charlie Isaacs (Ashley Zukerman)—which seem likely to alternate between a simmer and breakneck speed at will. And the World War II setting has built-in stakes and dramatic weight rather than a style (or even set of repressed collective emotions, as in Masters Of Sex). This is the Greatest Generation fighting so that the rest of us could go on living in freedom. But that also means that the show’s themes, and in particular its big picture stakes, are underlined, highlighted, and bolded, in case you weren’t sure that the work of the Manhattan Project could end the war, damn it. 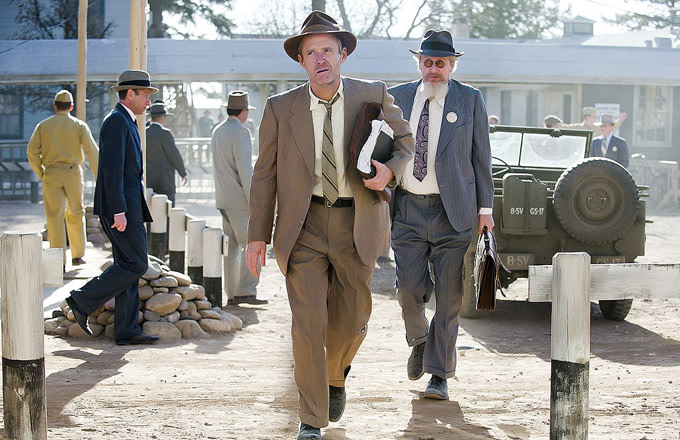 Part of the problem with any period piece is that, knowing history, it’s nearly impossible to convince an audience that they should invest in the scientists’ quest. Preordained events can heighten tension—we know that Masters and Johnson will end up married on Masters Of Sex, which shifts the focus in their relationship from a simple “will they-won’t they” construction—but in this case, it turns Manhattan into a bit of a dud. We know the bomb will be invented, and we know it will go off, and we know that when it does J. Robert Oppenheimer (played by Daniel London as an almost comically intense guru) will say something deep and profound that people will cannibalize to make jokes on the Internet. That’s where Manhattan ends.

History works best as shading to a story about particular characters (Mad Men, anyone?), which puts the weight on Manhattan’s characters to carry the show and give viewers a reason to continue watching the show. Like the implosion bomb Winter develops after hitting golf balls, they show mostly theoretical promise. Olivia Williams is fantastic, underplaying the botanist turned reluctant housewife Liza Winter, trying to navigate a life on hold while still clearly in love with and supportive of her husband (who may or may not deserve her attention). Mark Moses (Mad Men’s sad, hilarious Duck Philips) makes a big immediate impression as a no-nonsense colonel, and Hickey’s raw energy is at least intriguing, if perhaps not compelling enough to make him as sympathetic as audience-surrogate Isaacs.

Several of the pilot’s background characters begin to get their own depth in the second episode, which, as is often the case with slower dramas, the better argument for sticking with the show. Diving straight into the conflicts established at the end of the pilot—scientist Lao (Eddie Shin) and his trouble with mysterious authorities, Isaacs butting heads with Winter—it begins to make an argument that Manhattan is a series worth long-term investment. At its best, Manhattan suggests it might be willing to turn the screws on its characters much faster than we’d expect, setting up a series of situations. But with so much else on, and without much to differentiate Manhattan, there’s not a ton other than the summer drought to suggest it’s earned that commitment.

It’s impressive that Manhattan is airing on WGN. It’s easy to picture a future version of Manhattan that’s absolutely stellar, delving deep into the nature of secrets, the compromises talented individuals make in the service of bigger ideals (in this case, the U.S. government), and torturous, often-oblivious isolation. And it’s true that many drama pilots are about showing off potential rather than immediately diving in. But that doesn’t make it any easier to get excited about a show, that, like the project that gives it its name, is mostly about making the numbers add up.

Eric Thurm is a contributing writer. He tweets here.