Y'all slept on Younger. And if you didn't, congrats on being woke because TV Land's comedy series—from Sex and the City creator Darren Star—has been a bit of a sleeper hit since its premiere last spring. The show follows newly divorced 40-year-old Liza (played by Sutton Foster), who decides to rebrand herself as a 26-year-old publishing house assistant to build her career back up—something she missed out on while raising her now college-aged kid in the suburbs. She moves to Williamsburg, Brooklyn to live with her best friend Maggie (Debi Mazer), gets a wardrobe makeover, learns millennial slang, and tries to fit in with the hip youth—all leading to hilarious double life-juggling.

Along the way she meets new people—notably her hot, young tattoo artist boyfriend Josh (Nico Tortorella) and her work best friend, 26-year-old Kelsey Peters (Hilary Duff) who thinks Liza is a fellow 20-something girl trying to make it in the publishing world. While it takes lying about your age to ridiculous extremes, Younger is not just a ridiculous show. It's funny, full of heart, and relatable to women across multiple generations, while calling back to that vibrant, aspirational kind of New York City we saw on Sex and the City (though it's more Williamsburg than Manhattan this time).

Ahead of the season 2 premiere tonight, we talked to Hilary Duff—whose role is far from her Lizzie McGuire days—about some of the ridiculous things she goes through on the show (being drunk, high, and ALL those vagina jokes), learning millennial slang, her new EDM cover of Fleetwood Mac's "Little Lies," and what her four-year-old son thinks she does for a living.

I'm such a huge fan of Younger and I love your character, Kelsey Peters, on it. I love that she's both a good girl and a party girl, not just one or the other.
I know! She's not too far on either side. You're definitely gonna have a fun night with her. You might have to babysit her a little bit but she's always gonna have your back. And she's a hard worker—she epitomizes girls in their 20s who are trying to prove their worth and capabilities. They're willing to do it all with a hangover.

Yeah, for sure. I'm a 20-something who lives in Brooklyn and works in New York so I especially relate to that.
Yeah, I live in Brooklyn too while I shoot the show!

Would you say you're as up on millennial slang or trends as Kelsey is in real life?
Sometimes, I'm reading the script and will have to Google it. But I'm pretty cool, I guess!

What's your favorite slang you learned?
We had a whole episode about "truffle butter" 'cause no one knew what that was. I had to do a lot of explaining about that, which was obviously quite disgusting. [Laughs.] I'm really bad with all the abbreviations, though. Like "AF"—it took me a while to figure out what that was. Sometimes I'm far behind, but I also have a four-year-old, so…

I know you found out what a DivaCup was while shooting…
Yeah. By the way, the name "DivaCup," I don't know one diva that would wear that thing. It's so gross! Part of me was like, "Should I test one out for my role?" but I was like, "No."

Nor would I ask a friend to fish it out for me, like when it got stuck in that one episode and you had to ask Liza to help you out.
I mean, if I couldn’t get it, I might, before I go to the doctor. I have two friends I would ask but it would be terrible. But in reality, when we shot that, Liza and Kelsey had only known each other for a few months, so that kind of sums up Kelsey. She's willing to ask someone she doesn't know that well to do that for her.

Can we talk about the walrus vagina though? In the show, your author boyfriend compares your vagina to a walrus. Where did that come from?
Yeah, he says "your vagina is as soft as a walrus' fold." That's supposed to be a big compliment in Sweden or Norway or something.

Is that actually?
I think so! Or maybe the show made it up… The actor is actually from Norway and he was like "This is ridiculous." But it was so American because the whole episode I had to talk about my vagina. In the DivaCup episode I was like, "Apparently I have a huge vagina and I don’t know why I carry around a purse!" Like all these lines are so out of control.

So much attention down there!
I know. This season, I didn’t have to have sex with anyone or talk about my vagina. Diana Trout (Miriam Shor) and Maggie (Debi Mazar) got all of that. So no more walrus talk! 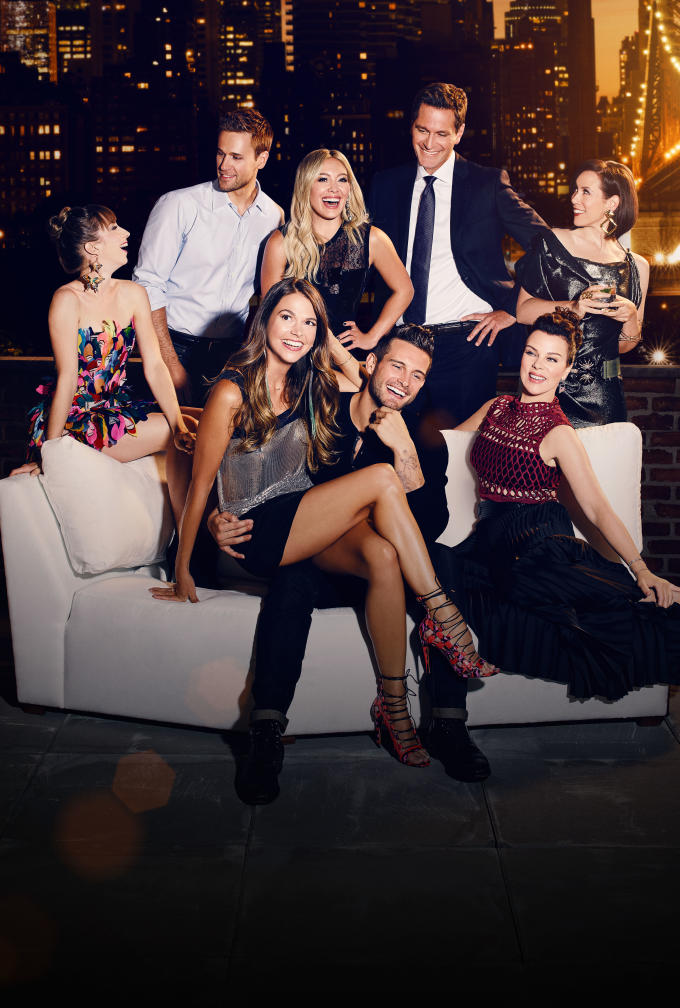 Since your character is out partying a lot, do you have a method of acting drunk or high? I know some people like to spin around a bunch before a drunk scene.
Oh that's funny, I haven’t thought about that. It's actually really hard for me, and I don’t know why. I obviously know what it's like to be drunk. I just think about that feeling of losing inhibition. Your eyes drop a little bit, your body is a little sloppy. Playing drunk, which I do often, is always a bit of a challenge because I'm so tired by the end of the day.

In this season, Liza is super nervous about telling you her real age. Would you be mad if someone lied to you to that extent?
Of course I think I would be mad if I had that kind of relationship with someone where we're putting a lot of trust in each other and then it was all fraudulent.

Especially if they're fishing out DivaCups for you!
Yeah! If we weren't that good of friends, I'd be like "Who cares?" or "Ugh, how annoying. We caught her." I think Kelsey's gonna take it hard when she finds out and I think she will be one of the last to find out. But the great thing about this show is, during this season, we're definitely moving forward. It's not like Liza is stuck in this one spot and no one is finding out. People definitely find out and a lot of challenges might lie ahead. We also really delve into other characters. Kelsey has a really big role this season—even my best friend Lauren has a really big story line.

I wanna ask you about the Fleetwood Mac "Little Lies" cover you did, because we're all obsessed with it.
Aw, oh my god yay!

I mean that song makes sense for the show, thematically. How did that come about?
I got the phone call from TV Land. They were like, "We want you to do a song for the promo!" And I was like "Hell yeah of course!" They wanted me to cover "Little Lies" by Fleetwood Mac and I kind of just went silent for a while. I was thinking, how would I cover a song that Stevie Nicks sings? But I said I would give it my best shot and I am actually obsessed with it too. It's so different from the original that I don’t think anyone would compare it by any means. And I hadn't been in the studio for a while, so it was cool. Plus, the guys who do music for Glee produced it so I was really excited to work with them.

So since you sort of live in Brooklyn now, do you have favorite places in the neighborhood? Do you and Sutton and Debi and the cast hang out here?
To be honest, we get along so well and we love each other but we work so much all week that on Fridays we're like "See ya Monday!" Sometimes our days are like 16, 18 hours. So it's like "Love you, goodbye." Occasionally I'll hang out with Molly Bernard (who plays Lauren) or Nico Tortorella (who plays Josh), but I have a family. But the places I love… I eat at Marlow & Sons all the time, or Mogador. So good.

Your son lives with you while you're in Brooklyn right?
Yeah, he goes back and forth between Brooklyn and L.A.

Does he get what mom's job is about?
You know what, he's starting to figure it out, which is kind of a bummer. He doesn't call us by our real names, but he did learn them, you know? He says my name kind of funny 'cause he can't say the "L." But the other day he said my whole name, "Hilary Duff." And I've never said that to him! It sounded so weird. I don’t know who told him.

Ha!
The other day he said he saw a picture of me on a poster and he was like "What are you doing?" I don't know if you've seen that poster but I'm like laying on top of a guy in the office and it says "Don't judge." I was like  "I don't know! Mama's just being so silly!" He was like "Yeah, silly" and walked away. I think he knows that not everyone's moms do that.