Staunch gun control opposers, like Donald Trump, have opportunistically seized the attacks on Paris to support their agenda, claiming more armed citizens would’ve helped the situation. Fellow GOP nominee, Jeb Bush, similarly disregarded lives lost in the Oregon tragedy, saying “stuff happens” and that gun control isn’t the solution. Time and time again studies have shown U.S. states with strict gun laws have fewer gun-related deaths to show for, but that’s been disregarded too. Here’s more alarming information that will help people stay woke, but probably won’t have an effect on gun control: more than 2000 terror suspects were able to legally purchase guns between 2004 and 2014 because of U.S. gun laws.

Did you know a person who is a known terrorist or a suspected terrorist on the FBI’s terrorist watch list is legally allowed to purchase handguns or assault rifles? In 2010 the Government Accountability Office said, “Membership in a terrorist organization does not prohibit a person from possessing firearms or explosives under current federal law.” People barred from purchasing guns, per the Washington Post, are: “felons, fugitives, drug addicts, and domestic abusers.” According to a report from the Government Accountability Office, these suspected terrorists tried to purchase guns at least 2,233 between 2004 and 2014, and were successful 91 percent of the time. 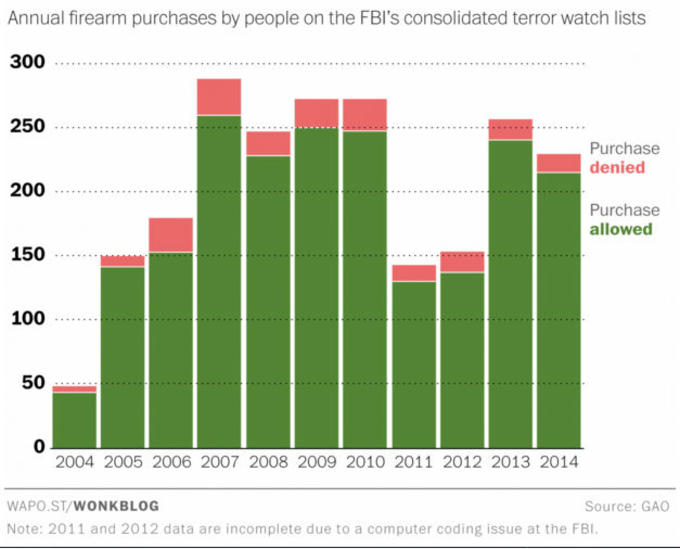 The FBI’s watch list is currently at approximately 700,000 people, because it includes family members of possible terror suspects, in addition to acquaintances and other affiliated people.  For this reason the National Rifle Association (NRA) has pushed back against proposed laws meant to stop gun sales to suspected terrorists, because it may rob these thought to be innocent people, who may just be guilty by association, of their constitutional right to bear arms. One such bill was introduced earlier this year, the “Denying Firearms and Explosives to Dangerous Terrorists Act of 2015.” It allowed possible suspects to contest their place on the watch list if they were so inclined to buy a gun. The NRA rejected previous versions of the bill saying “gun control extremists” proposed the bill and that it was “aimed primarily at law-abiding American gun owners.”