It's a tribute to the talents of 11-year-old Quvenzhané Wallis that the Annie remake in which she stars conveys the earnest optimism of everybody's second favorite orphan (after Batman) despite its many flaws. The film is modernized, prefabricated, poorly staged, clumsily self-referential, and all the new songs are capital-A Awful—but Annie makes you think there's still hope.

There isn't, though. This movie is bad. The sun is never coming up again.

Annie and her billionaire benefactor are black in this version of the 1977 Broadway smash and perennial high school favorite, and that detail has gotten the most pre-release attention. But the change is largely cosmetic, unincorporated into the story. (Yes, shockingly, the family musical being released at Christmastime isn't a treatise on race in America.)

It's the other alterations that are significant. Moving from 1933 to 2014 (which had to happen for the colorblind casting to make sense) necessitated other changes, setting off a domino effect. Updates range from the reasonable—we don't really have "orphanages" anymore, so Annie comes from a foster home—to the ridiculous, as when she's rescued from kidnappers thanks to Twitter, Instagram, and a mobile carrier's unfettered ability to spy on its customers. A new side character is given villainous motives so that Miss Hannigan can be redeemed (ugh). The search for Annie's parents is now part of a larger, needlessly complicated conspiracy.

This, among other reasons, is why we can't have nice things. The Annie we're familiar with (released in 1982) is hardly a masterpiece, and altering it isn't automatically a poor idea, but the execution by writer-director Will Gluck and co-writer Aline Brosh McKenna is badly fumbled. Once a simple story, now it's cluttered with cultural detritus (Miss Hannigan is a failed backup singer for C+C Music Factory), winking references (a club band is named The Leapin' Lizards), and broad, lame comedy (Jamie Foxx does at least three spit takes). For good measure, there's also a Very Special Message about childhood literacy.

But then there's Annie herself, a smiling, indefatigably hopeful cherub. Wallis is well-matched with the smoothly charming Foxx's Daddy Warbucks character, now a cell phone mogul named Will Stacks. Wallis and Foxx are great together, and Rose Byrne often helps as Stacks' assistant Grace. Give me a movie with just those three characters and I'm happy. But here we've got a duplicitous chief of staff (Bobby Cannavale), an extraneous bodega owner (David Zayas), and an outrageously Russian social services employee (Stephanie Kurtzuba), among others, all underwritten and overplayed.

And then there's drunken Miss Hannigan, played by Cameron Diaz. It was a bold choice to fill a role made famous by Carol Burnett with someone who isn't funny, and it was even bolder to beef up that role, so that now the unfunny actress you've hired to play the comic foil has EVEN MORE screen time in which to cause groans of despair and ennui. The urge to give her character more dimensions (why do we keep doing this to our villains?) dilutes the comedic tension between her and the good guys. Again, something very simple has been made complicated, lessening the effect. 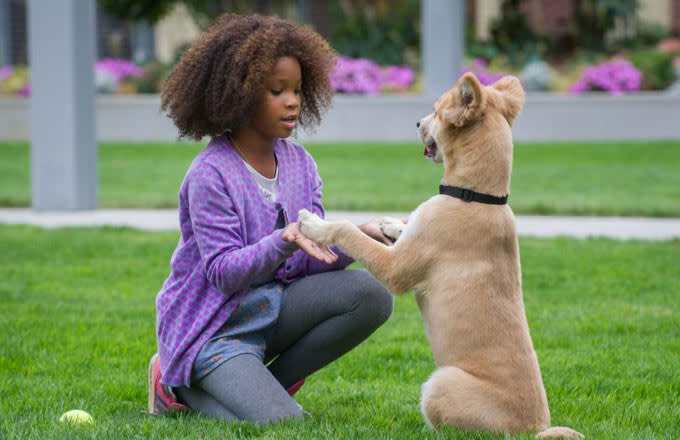 The Charnin & Strouse songs that survived (several didn't) remain tuneful and catchy. They stand in contrast to the new songs, mostly written by Gluck, Greg Kurstin, Sia, and Kid Harpoon, which are uniformly forgettable, packed with lyrics that don't scan or rhyme properly. ("Fingertips" rhymed "wish list"? Get the hell out of my office!) And while Gluck has proven a nimble director of straight comedies (see Easy A and Friends with Benefits), his foray into musicals is almost disastrous. The numbers are anemically staged, with what little dancing there is virtually ignored by the camera.

At one point, as she's being serenaded, Miss Hannigan says, "Are you singing to me? Is this really happening?" For a musical to acknowledge the inherent strangeness of spontaneous singing is to risk pulling the audience out of it. You break the spell. (It doesn't help that Hannigan says this after she's already sung a few songs of her own.) It suggests a lack of confidence, like the film isn't sure it's cool to be a musical and wants to keep some ironic distance.

For us to buy something as sweet and saccharine as Annie, it needs to take place not in the real world but in a slightly magical version of it, where people do indeed sing on the street and billionaires adopt orphans. This modern version tries too hard to have it both ways, to seem realistic (CHILDHOOD LITERACY!) yet also still be a fairy tale. New Deal? Nah, let's stick with the old one.

Eric Snider is a contributing writer and film critic. He's got jokes.