Because it’s late-December, a.k.a. the heat of movie awards season, there are, count 'em, four prestige biopic dramas opening this week. One of them, the Martin Luther King, Jr.- and Civil Rights Movement film Selma, is remarkable; another, Tim Burton’s atypically vanilla Big Eyes, about artist Margaret Keane, is a snooze. The other two, American Sniper and Unbroken, are the worst kind: Biopics about people whose stories don’t work as movies.

The most problematic of the two is American Sniper, the new film from Clint Eastwood, a once-great director (see: Unforgiven, Million Dollar Baby) whose last few movies have either been saccharine crap (Hereafter, Jersey Boys) or disastrous biopics (J. Edgar). American Sniper combines the latter with a first-person shooter's emptiness.

Bradley Cooper, looking ripped and speaking with a Texas hayseed twang, stars as Chris Kyle, a Navy SEAL sniper who’s regarded as the deadliest sharpshooter in the U.S. military’s history, responsible for 160 confirmed kills. Eastwood treats Kyle’s motivations for enlisting the same way Michael Bay handles characterization—they’re rushed through and hinge on a sexy, promiscuous blonde. After a night of professional bronco riding, Kyle returns home, finds another man getting dressed in his bedroom, roughs the dude up, and tells his girl to get out; she retaliates by calling him a loser. The next day, Kyle sees a news report about a bombed U.S. Embassy building, remembers that his ex-girl just called him a loser, and heads to the nearest recruitment office. He might as well say, "America, why the fuck not?" 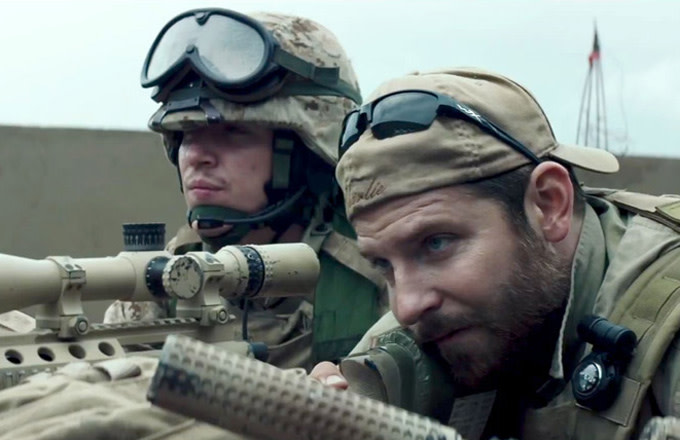 You're meant to sympathize with Kyle throughout his four traumatic, corpse-ridden tours in Iraq. Yet, despite Cooper’s fine performance, American Sniper is entirely detached from emotions other than the kinds you have while playing Doom. By haphazardly establishing Kyle’s backstory, Eastwood provides no empathetic reasons for why Kyle became a camouflage-clad killing machine. He's just good at causing death. American Sniper's endless scenes of Kyle emptying bullets into armed Iraqis make it a soulless video game: Kill Iraq 2K15.

Taken as out-of-context action set-pieces, American Sniper’s shootouts and battlefield encounters are, to Eastwood’s credit, impressively staged. They’re on the same level as The Hurt Locker in terms of visceral suspense and brutal shock, but they’re also hollow. Eastwood surrounds the blood, shells, and tanks with scenes of Kyle back home with his wife (Sienna Miller) and children, dealing with his PTSD and slipping into catatonia whenever there aren’t any guns around. In these moments, Miller is especially strong, giving American Sniper some much-needed heart and salvaging what’s otherwise your stock "wife back home" type. Alongside Miller, Cooper mutes whatever drama and tension he's trying to convey with his internalized pain and rage. It's as if he, like Eastwood, is just waiting for the next gunfight.

It’s hard to care about someone whose primary character trait is the ability to mow down other people with high-caliber weaponry. American Sniper boils Kyle down to a Call of Duty avatar.

If American Sniper’s Kyle is a non-starter, Unbroken’s Louis Zamperini is an overheated engine. The latest directorial effort from Angelina Jolie, the WWII-set Unbroken centers on the extraordinary life of the aforementioned Zamperini, an Olympic track star who, while serving as a bombardier, survived for 47 days on a floating raft after his fighter plane crashed into ocean, was taken hostage by the Japanese army, and endured horrific torture in a prisoner-of-war camp. Crazy, right?

The potential for heavyweight drama is robust in Unbroken, and in its next-big-thing star, Jack O’Connell (who’s amazing in this year’s excellent British prison drama Starred Up), Jolie’s film has a raw and explosive lead who’s more than able to carry the whole thing. 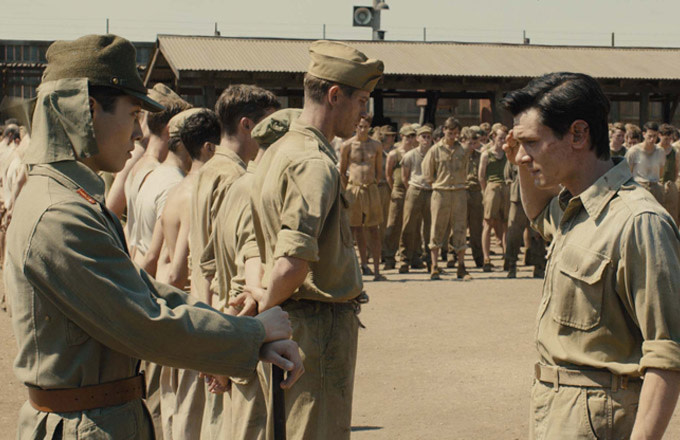 Why, then, does the "harrowing" (air quotes) Unbroken elicit about as much of a reaction as a tepid, by reality TV's scale, Real Housewives episode? The answer's in any interview Jolie’s given about the film and Louis Zamperini: She’s in awe of the man, who passed away in July at the age of 97. While making Unbroken, she spent countless hours with him; they became dear friends, and, understandably, Jolie regarded Zamperini as a personal hero and a genuine article of a human being. You can't blame her—Zamperini epitomizes fortitude. That impassioned opinion just makes Jolie the worst choice to direct a Louis Zamperini movie.

There’s zero tension in Unbroken. The only conflict comes from trying to figure out what exactly credited co-screenwriters Joel and Ethan Coen—yes, the almighty Coen Bros.—added to the script. Jolie’s affinity for her subject turns his story into by-the-numbers hagiography. Every scene feels superficially "significant," right down to the intrusive orchestral score that’s so on-the-nose, it feels as if Jolie’s holding Beats By Dre headphones above your ears and fastening your eyes towards the screen: "See, this is important!"

All you'll see is a one-dimensional superhero. As Unbroken’s title implies, Jolie’s depiction of Zamperini is one of unfuckwitability. Whether he’s taking punches to the face from all his fellow prisoners, as ordered by the camp’s sadistic leader, Mutsuhiro "The Bird" Watanabe (Japanese pop star Miyavi), or withstanding The Bird’s multiple baton lashes, O’Connell’s Zamperini grimaces, occasionally yells, and gets back up for more. That's it. Rinse, cringe, wash, cringe, repeat, cringe.

Like Chris Kyle, Louis Zamperini accomplished more in combat than you or I will probably ever achieve. But just as Eastwood forgot (to be fair to Clint, he is 84 now), Jolie has overlooked one key thing about that: Movies can't get by on posturing alone.

Matt Barone is a Complex senior staff writer who advises you to pick Selma this week. He tweets here.