2017’s Gucci Mane is a new man. He’s not a clone like some fans have suggested and he hasn’t gone soft, but he’s changed. He tweets about non-fiction reading material, he’s eating kale, he’s back on top, and he’s in the clear. “You know what I’m saying, I do what’s good for me,” Gucci tells Complex. “I don’t follow traditions and rules, I create them.”

As far back as 2001, the rapper born Radric Delantic Davis had found himself constantly beset by heaps of legal trouble, with charges ranging from assault and cocaine possession to pushing a woman out of a moving vehicle and driving on the wrong side of the road. Despite the odds, the 37-year-old Atlanta rapper put out an incredible amount of music while both in and out of jail to keep his career afloat. But it wasn’t until his lengthiest stint upstate that he was pushed to really get his life together; he got in shape, got sober, and orchestrated two dozen mixtape releases, all while behind bars.

Now out of prison, Gucci has since appeared on a No. 1 single, Rae Sremmurd’s “Black Beatles,” he’s proposed to his girlfriend—model, actress, and cosmetics CEO Keyshia Ka'oir—and even scored a book deal, an upcoming memoir with Simon & Schuster. With his most successful mainstream run still in full swing and his forthcoming 19-date Trap God tour on the horizon, Complex takes a look back at how he went from troublemaker to hip-hop’s most optimistic anomaly. 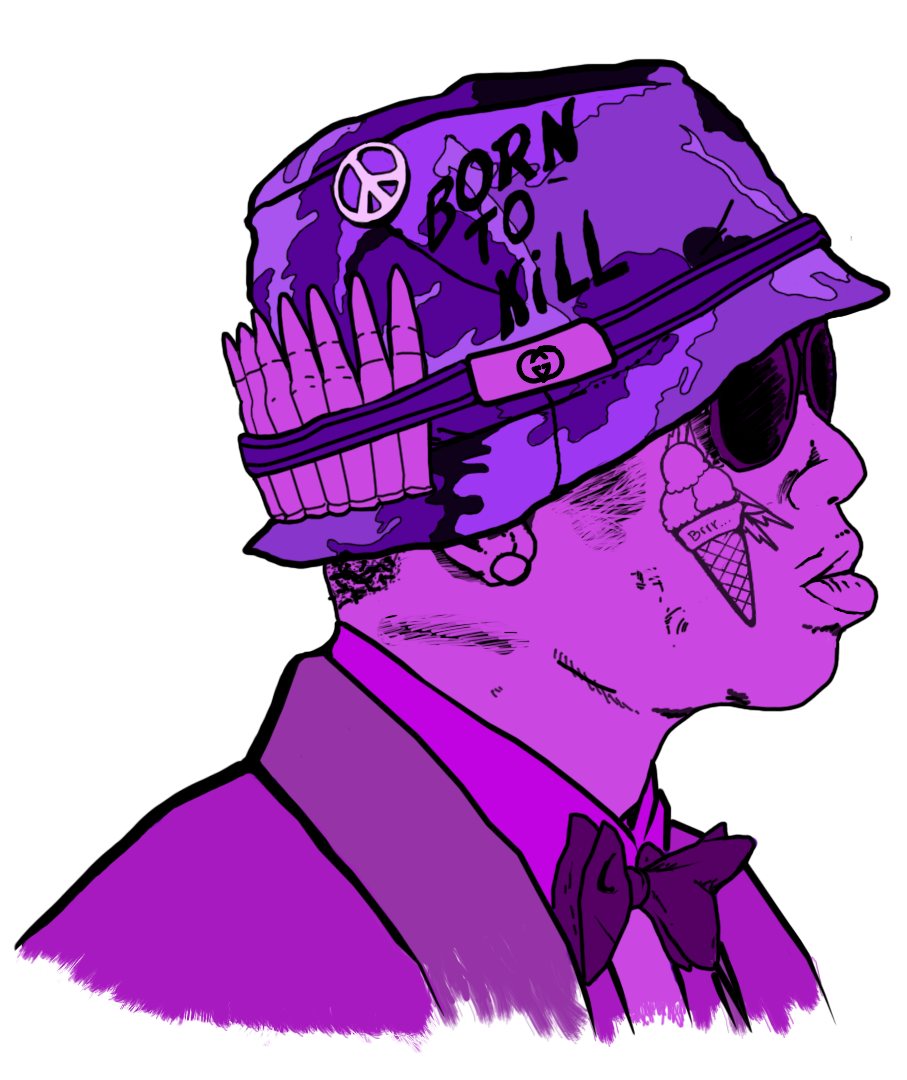 Gucci Mane is arrested for violating the Georgia Controlled Substance act and obstruction of officers on cocaine charges. He posts a $1,500 bond and is released.

Gucci Mane is sentenced to time at the Dekalb County Jail for possession of cocaine with intent to sell or purchase. He is released on July 24.

On May 10, he fires at a group of men attacking him at a friend’s house in Decatur, Ga., killing Henry Lee Clark III. Clark's body is discovered several days later outside a nearby middle school. Gucci Mane turns himself in and posts $100,000 bond on May 24, the same day his debut album Trap House drops. The charges are eventually dropped due to insufficient evidence but the scene will stay with Gucci for the rest of his life. Talking on ESPN’s Highly Questionable earlier this year, Gucci claimed that he suffered from paranoia and post-traumatic stress disorder as a result of the encounter, saying, “I never knew when it was gonna come. It was like, I was always preparing for the day that bullets start coming and start ringing out."

Gucci is arrested in Miami for an outstanding warrant stemming from an aggravated assault charge. A promoter from his label at the time, Big Cat Records, alleges that he beat him with a pool stick in Atlanta. Gucci is sentenced to six months in prison and stays on probation for almost seven years.

While driving with two female passengers in Atlanta, he is pulled over and arrested for marijuana possession after an officer finds a burned blunt in his car. He posts $500 bond and is released.

The same year that Gucci signed to Asylum Records, he was also booked for a felony battery charge and was released the same day.

A year after releasing his commercial debut, Atlantic Records’ Back to the Trap House, Gucci is booked for violating probation and not completing community service hours stemming from his 2005 sentencing. He is sent to Fulton County Jail for six months and is released on March 13, 2009. He immediately returns to the studio to record five new songs.

Less than a month before his new album The State vs. Radric Davis is released, Gucci is sentenced to another 12 months for probation violation relating to his 2005 arrest. He is released from Fulton County Jail on May 12, 2010, and in his first post-prison interview outside of the facility, he says, “I have made mistakes in my life, and heard a lot of people care about me…. Those mistakes have brought me to where I am today. They will not be repeated.”

Gucci finds himself back in central booking for a litany of charges: driving on the wrong side of the road, reckless driving, failure to maintain lanes, failure to obey traffic control, obstruction, not having a license and interference with government property. He is pepper sprayed on the scene, but lucks out—he files a plea of mental incompetence and prosecutors order that he be released from jail, choosing not to pursue charges for want of prosecution.

Gucci affiliate Waka Flocka Flame’s house is raided, leading to Gucci’s arrest related to a prostitution operation. He is released without charges being filed.

Because Gucci’s lawyer entered a plea of incompetency on Dec. 27, in an attempt to stop the probation revocation hearing, Gucci is ordered to go to an Atlanta hospital described as “an 111-bed psychiatric and chemical dependency treatment facility.” He is released on Jan. 13.

Gucci is arrested for allegedly pushing a woman out of his moving car in January 2011. The incident unfolded when Gucci approached the 36-year-old at the South DeKalb Mall, asking her to get breakfast and go to a hotel for $150. When she declined, he pushed her out of the car after several attempts. He is arrested on April 8 while visiting his probation officer, and is released on a $5,000 bond on April 19.

Sentenced some months later, Gucci is ordered to spend six months behind bars after pleading guilty.

Gucci didn’t release a studio album between 2011 and 2016, but keeps himself fresh on the music scene with a slew of mixtapes issued through his 1017 Brick Squad imprint, culminating with the fifth installment in his Trap House series. Simultaneously, he faces some of his biggest legal issues yet. He is arrested after allegedly beating a fan with a champagne bottle at an Atlanta nightclub. Gucci turns himself in on April 12, and is denied bond, getting release from prison on May 2.

The same week that Atlantic Records drops Gucci, he is arrested after a friend summons police officers on account of his strange behavior. Gucci is charged with marijuana possession, disorderly conduct and carrying a handgun. Two days later, he is found in possession of a different handgun, using it to make threats to his attorney and police. He is indicted on Nov. 19 and held in prison from his arrest date until his court date in December.

The past catches up with Gucci in court. He is arraigned for two counts of possession of a firearm from the previous September arrests and faces up to 20 years behind bars at Fulton County Jail.

A guilty plea to a previous gun charge in May 2014 leaves him with a 39-month sentencing. It works out, since he’d already spent 11 months in the clink prior to the ruling. Even given the circumstances, he promises to drop eight more mixtapes before 2014 comes to a close.

Gucci pleads guilty to the assault charge stemming from his beating a fan with a champagne bottle. He is scheduled for release on Sept. 20, 2016, but gets out three months ahead of schedule on May 26.

While behind bars, Gucci gets his life together. He remembers the minute it all clicked vividly, telling Complex, “I know clearly the moment, when I realized I had a chance to get out in a couple of years as opposed to being locked up for a couple of decades. Once I got that opportunity, once I had that chance, I treated it as if it was my last chance.”

Gucci spends time focusing on sobriety, something he thought precluded him from staying out of jail. Wiser and sober, he wants to impart the wisdom he learned from his mistakes onto a younger generation, telling Complex, “I always keep my door open to help somebody and anytime someone [reaches] out and I can help them, I always try to tell them something from what I’ve experienced to keep them from going through that.”

While behind bars, Gucci loses dozens of pounds, whipping himself into shape and losing his gut. His musical output didn’t stop either: he releases around two dozen mixtapes in prison, put together by his engineer Sean Paine. His forthcoming book, an as of yet untitled memoir due out on Simon & Schuster, is also penned in jail, penned “on pieces of paper” as a sort of refuge from the brutal reality that is incarceration and getting dry off lean. Books become Gucci’s sanctuary, he credits Malcolm Gladwell’s Outliers and James Allen’s As a Man Thinketh, for helping him forge ahead anew, maintaining to Complex that “you never want people to think they got you figured out.”

Released from jail three months early, Gucci remains on house arrest at his home in Marietta, Ga., swiftly getting back to business.“You gotta keep finding things that keep you excited,” he explains. His first post-prison release, “First Day Out Tha Feds,” now has more than 21.8 million views on YouTube, and he’s been prolific ever since, appearing on Rae Sremmurd’s Hot 100-topping “Black Beatles” and putting out numerous new projects, including Everybody Looking in July and The Return of East Atlanta Santa in December. He claims the biggest thrill of being out of prison is the act of creating itself, saying that it’s all about “the energy.” He would take more time to make sure the beats sounded right, the lyrics hit real hard, and that it was always more or less spontaneous.

But perhaps the biggest indicator of his newfound sobriety and pivot towards doing something more meaningful with his life came with his proposal to Ka’oir during the fourth quarter at a Hawks vs. Pelican game in November. Since his release in May, the couple has remained healthy and fit and broadcasted every last drop of their positivity over SnapChat. It’s a notable step forward for the rapper, one who turned his life from a series of criminal mishaps that kept him from reaching his full potential to someone who came out on the other side. When talking about his upcoming memoir, he mentions that it’s “just the story of being resilient.” Though he’s been in the game for over a decade, this is only the beginning for Gucci, who’s hitting a new, more clearheaded type of peak.