As Drake proved in 2015, there is value for all in being meme-able. Whether it's because he's the first rapper to take the dub in a rap beef partially due to memes or that two months following the release of his "Hotline Bling" video, there are now Hotline Bling holiday sweaters, Drake is proof that the entertainment opportunities to capitalize on are endless.

The latest polarizing Internet persona and provider of endless memes is undoubtedly DJ Khaled. His daily Snapchat stories revolve around the keys to success, positivity, watering his plants and LIOONNNN, which we got to see up close and personal this week. Khaled himself has started to sell merch based off his DJ drop, "Another One." The popular ad lib is seeing new life via Snapchat and is now on on tees and slides. This week, he also took to social media to give some shine to Durham, North Carolina-based designer, Ryan Cocca, who created a Jordan parody featuring Khaled, now known as The Keyman logo.

We spoke to Cocca yesterday about how Khaled's inspirational snaps turned into ANOTHER ONE for him.

The former owner of a now defunct T-shirt site—the one that brought you UNC coach Dean Smith-inspired tees and shirts that put the word "SCAM" in place of NCAA in the collegiate league's logo—got the Internet buzzing when he put Khaled's silhouette in the Air Jordan logo dunking position. It also got Khaled's seal of approval: Tuesday night, he posted the Keyman logo on his Instagram, captioned, "Salute my fans for making this, this dope."

"All I saw was a text from my guy Sunny that just said 'check Khaled's Instagram,' and I pretty much knew what had happened," says Cocca. "I was planning on selling it from the beginning, but his post made the sense of urgency way bigger. With designs in the past, I've had people jump in once it goes viral, steal the design and sell it themselves on eBay or teespring or wherever, and I wanted to make sure that didn't happen. At the end of the day, it's just cool that Khaled saw it and posted it, so I didn't want to seem like a greedy capitalist, but I also didn't want to sit back and do nothing while other people made money off the design." ​ 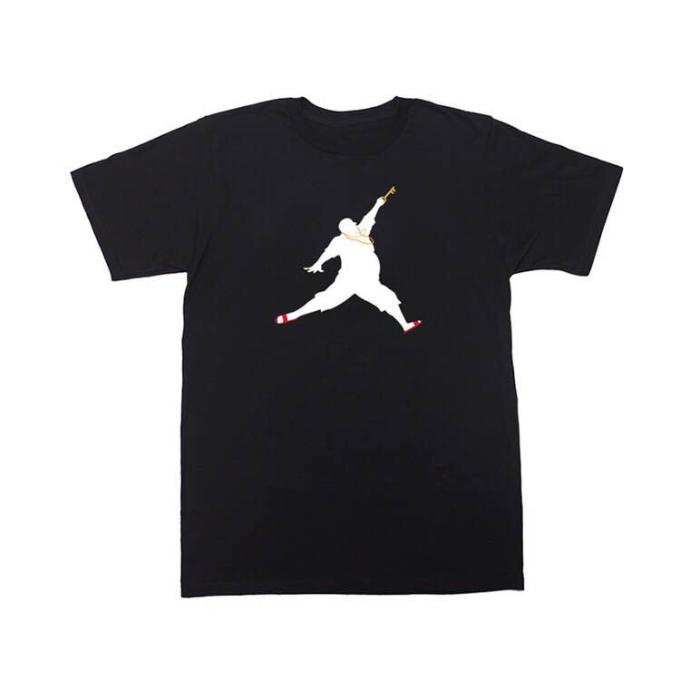 As we recently learned while sneaker shopping (and stalking the Snap), Khaled is heavily invested in sneakers and, more specifically, Jordans. Cocca said the Jordan Brand-inspired logo seemed like a natural cross and took it from there. "Once I started thinking of that iconic logo, I started to flesh out how a Khaled version would be different—his weight, obviously, as well as the slides, the pinky ring, chains, and most importantly, the

. I was pleasantly surprised to see someone on Twitter even notice the neck rolls. Details are definitely a major key to success and more wins."

You can get your hands on your own Keyman t-shirt here. Bless up!