One dude's swift annihilation by the Internet for wearing a rape-themed T-shirt to Coachella apparently wasn't enough to discourage one man from wearing a similarly atrocious T-shirt to another music festival. A man wearing a "Rape Your Face" T-shirt at Lollapalooza this weekend spoke quickly with Jezebel, and (spoiler alert!) he and his friends sound awful.

The T-shirt is part of a line of tees that play on the North Face logo and feature a variety of slogans about doing stuff to one's face, including "Melt Your Face," "Lick Your Face," and "Phuck Your Face." When asked why he picked "Rape Your Face" the festival-goer couldn't come up with a great reason, and that's where things somehow get even more cringe-worthy:

“One last question,” I said. “Have you ever literally raped someone’s face?”

He shrugged again, smiling at me, his sweat stains creeping. “Guess you’re gonna have to find out for yourself,” he said.

The Melt Your Face Facebook page is starting to catch a lot of heat from justifiably angry commenters.

Man Wears This “Eat, Sleep, Rape, Repeat” T-Shirt to Coachella, Gets Destroyed on the Internet 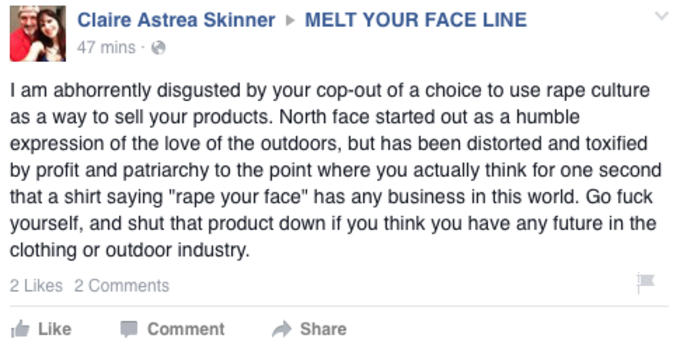