A few months ago, WWD announced that '90s-nostalgia-inducing denim line JNCO was poised to make a comeback. Known for their super wide legs and graffiti-inspired logos, JNCO jeans toed the line between skate, punk, and all the other '90s subcultures that hung out in spots like raves, mall parking lots, and dark clubs where "dubstep" was still called "techno" and "Molly" was just "Ecstasy." Looking back, some wondered why we even wore them in the first place, and the teens of today definitely aren't feeling the wide leg styles, either.

Still, the distant memory of the past allows a certain shade of rose to fog up our vision, and when I had the opportunity to see the revamped JNCO line last night, I absolutely had to do it. Under Andrew Jacovou, the CEO and President of Guotai Litian USA, JNCO's comeback rests on the shoulders of three lines: a core collection, a modern fashion collection, and the one that tugs at my heartstrings—the "heritage collection," which consists of the wide leg denim commonly associated with the brand. 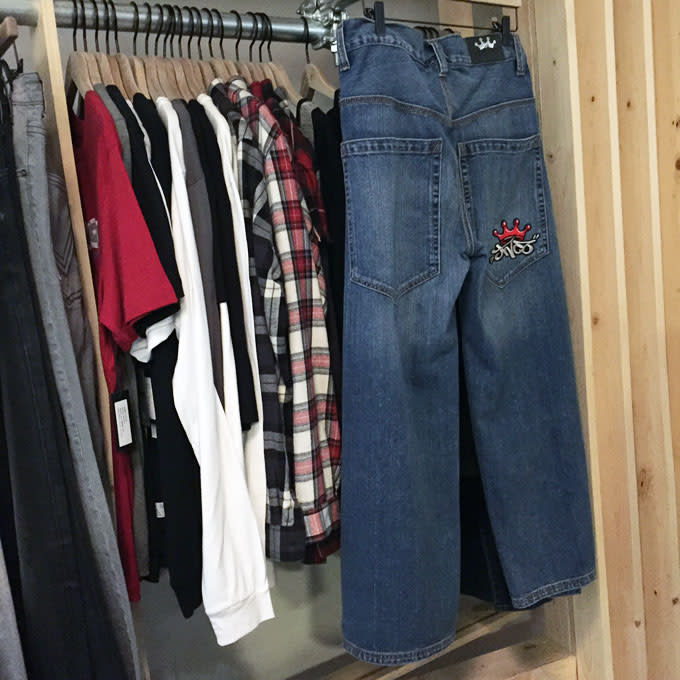 Prominently on display from the heritage line were the Halfpipe jeans, coming soon to JNCO's web shop. The pants retail for $140, and are available in a stone wash and darker rinse wash. The washes feature a different embroidered logo on the back right pocket, which is big enough to hold a Chipotle burrito. Or if you're Casper from Kids, you could probably surreptitiously stow an illicitly obtained alcoholic beverage:

The denim has a 23-inch leg opening, which totally swallowed my arm. I tried to see if it would fit around my head. It did. What I did not get to do was try on the jeans, but hopefully that can be amended. 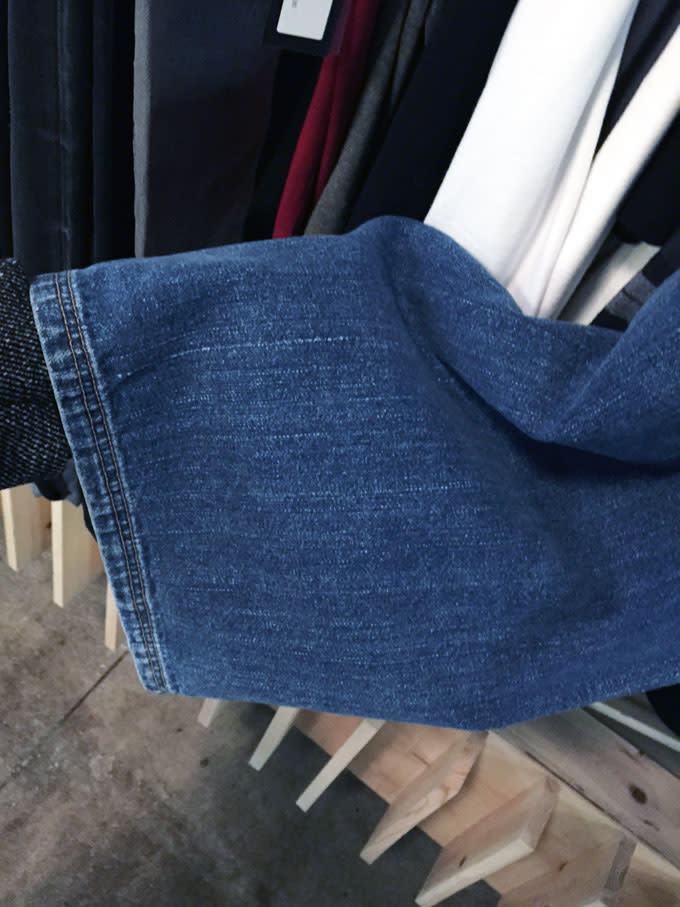 Here's a look at the Halfpipes in the rinsed wash: 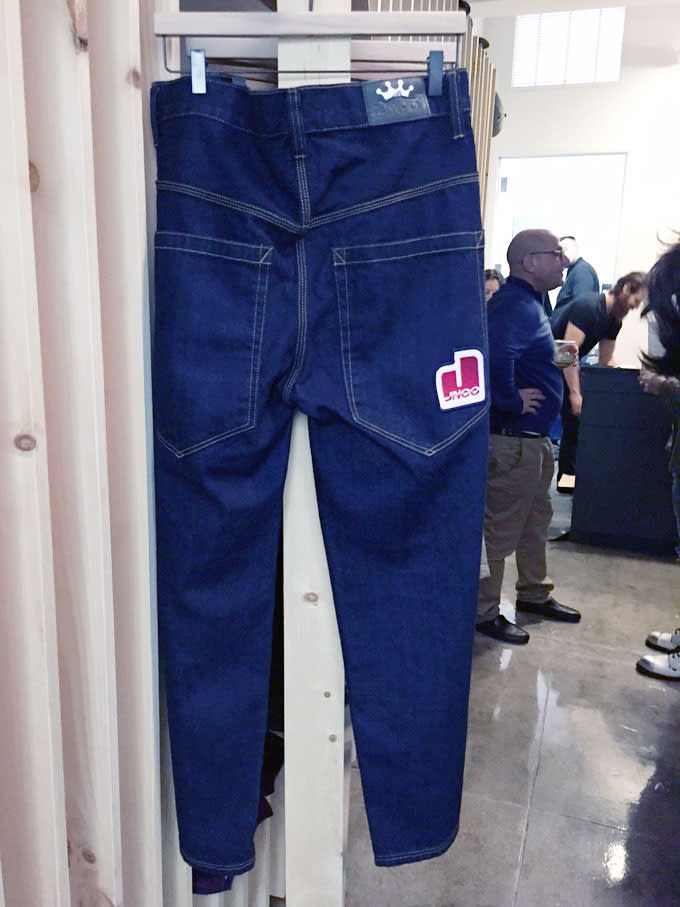 There are also several vintage-inspired T-shirts that complement the jeans. Most of the graphics are treated to look faded and consist of '90s JNCO logos. What was noticeably absent was Flamehead, the literally hotheaded character who appeared on some of JNCO's boys clothes, labels, and back pockets.

As I continued on to the back room, I was greeted with several looks from the different collections. As expected, the heritage looks were absolute blasts from the recent past. This outfit I'm pretty sure has been worn to every single Everclear concert, ever. 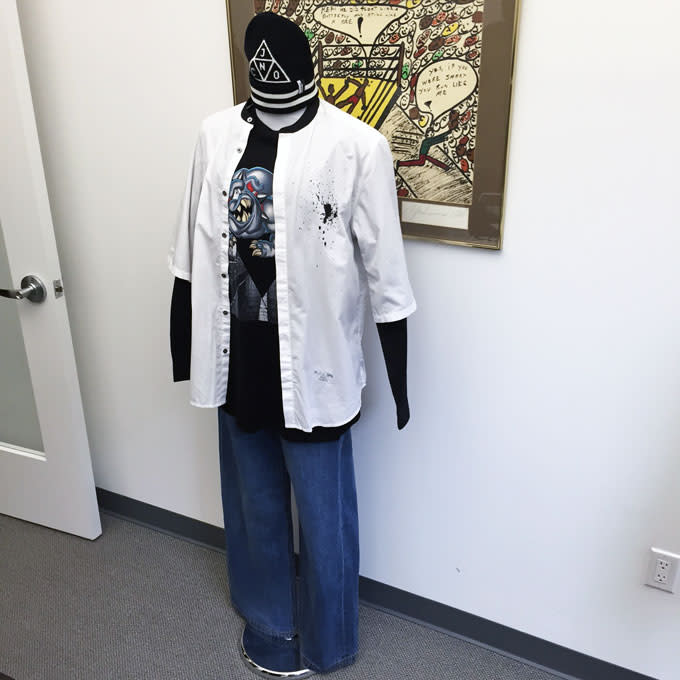 While this look is definitely a guy who has the complete House of Pain discography and has consciously bought more than one chain wallet in his lifetime. He's also the dude who bought a PlayStation solely for ESPN Extreme Games and utterly lost his shit when the first Tekken came out: 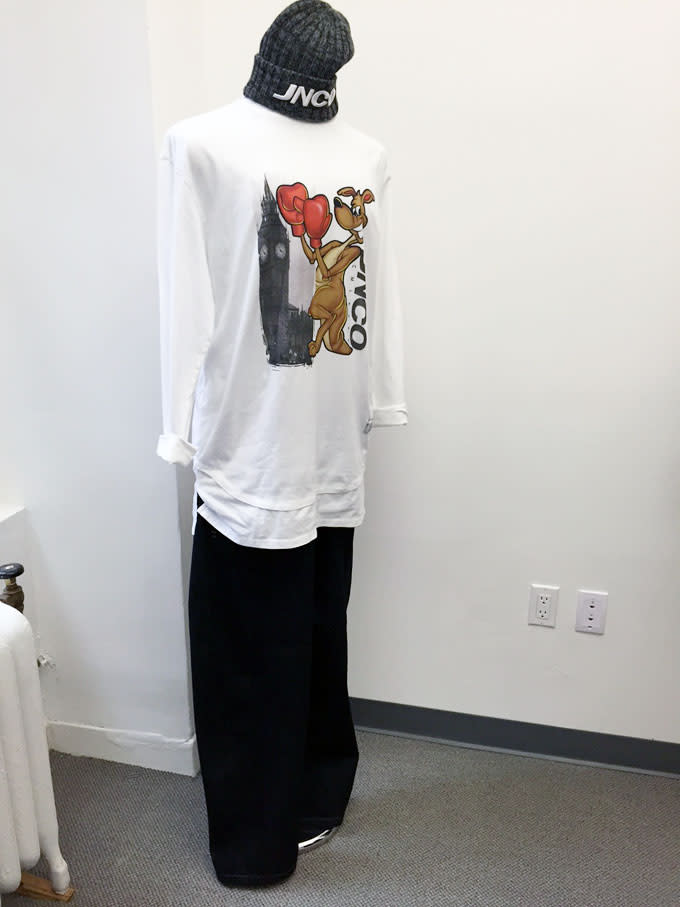 Here's a look from the core collection. It takes its cues from a lot of trends that are popping off right now, like rare hemlines, moto jeans, slightly oversized hoodies, mélange T-shirts, and minimal branding. It's eons from the JNCO '90s babies know and love, but perhaps younger customers could be down with the slimmer fits and trickled-down aesthetic. 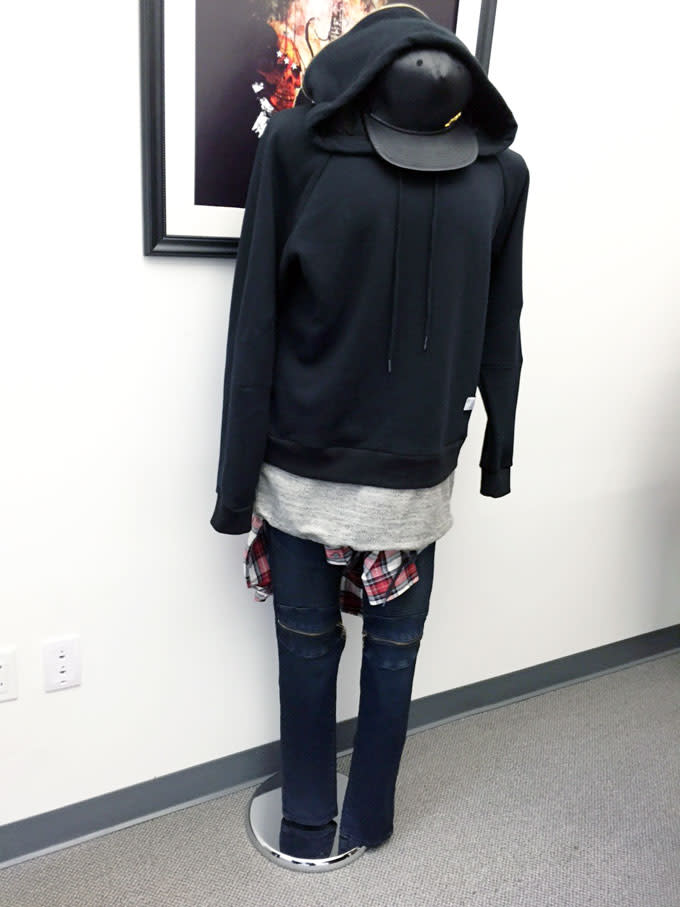 There was also this flannel shirt and denim hat. What you can't see is that the flannel actually has a back zip, so you can turn it into a fishtail-type situation if that's your thing. It's reminiscent of Jerry Lorenzo's Fear of God line, but on a budget. There's definitely a lot of that whole "alt-California dark lifestyle" look seeping through a lot of the clothes. Where do these types of people hang out? 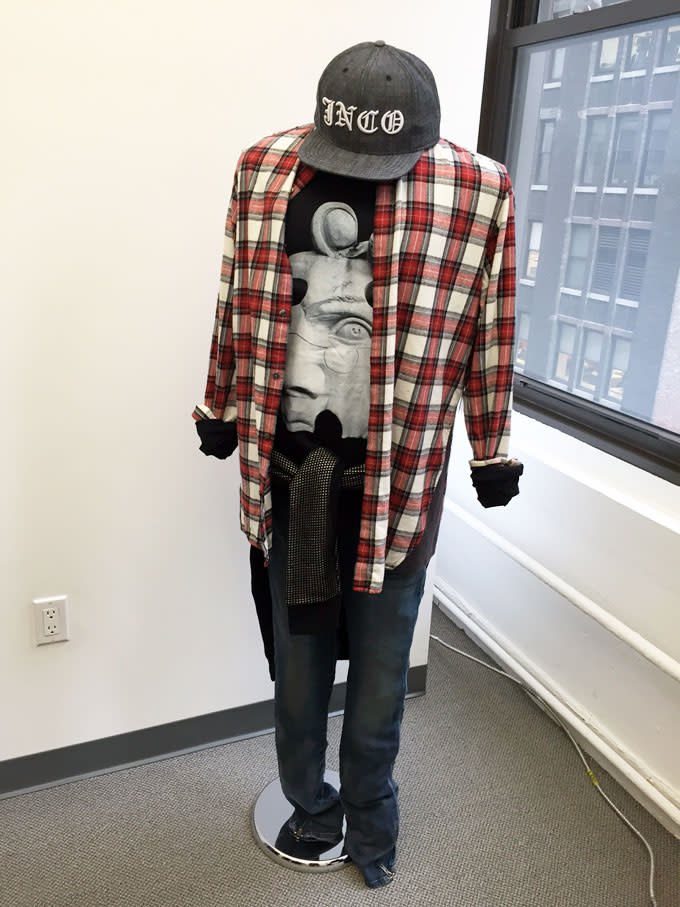 Pieces from the fashion collection include this denim poncho. Can't say they're not actively trying to push boundaries with their styles. 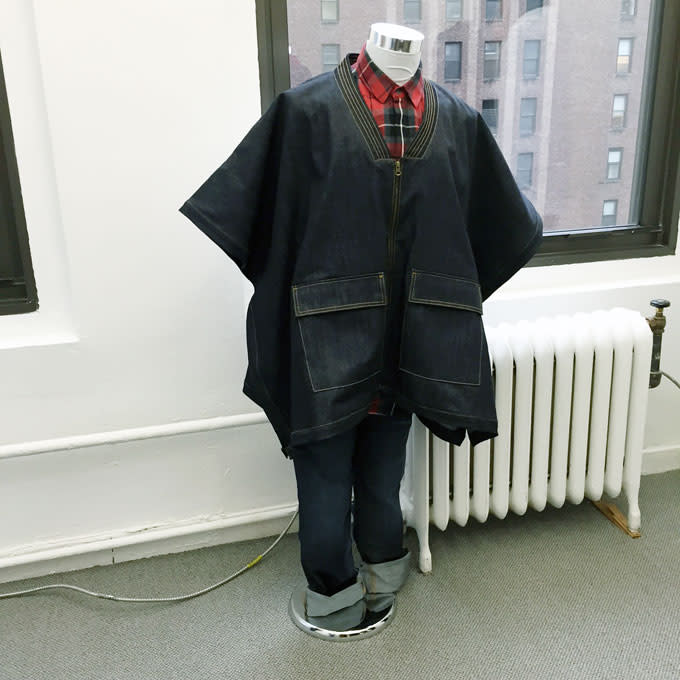 Of course, no of-the-moment men's fashion collection would be truly complete without a jumpsuit. JNCO's is denim, because of course it would be. There's a huge block print on the back with 1985 in roman numerals (a nod to the year the brand was founded) and a retro-futuristic JNCO logo. Not gonna lie, I would consider wearing this, if only for the LOL factor. 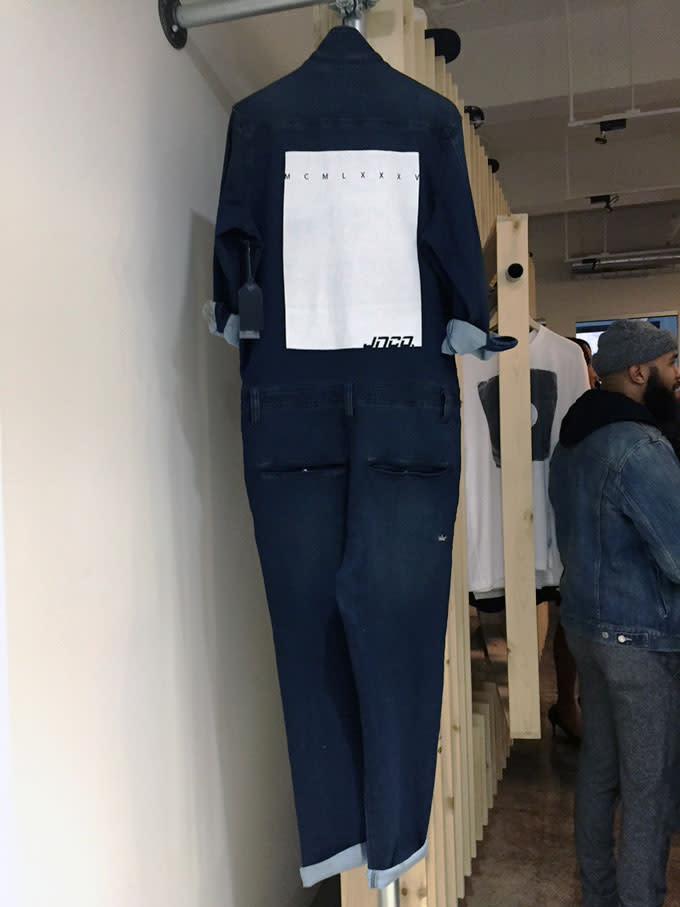 The verdict? The heritage stuff is clearly what a lot of people will be talking about, but I'm not sure how strong the overall nostalgia for 23-inch wide denim will be. Sure, there's an overall trend in menswear towards baggier fits, and there are plenty of women's jeans already cut that wide, but it's hard to imagine some of this stuff worn without a healthy dose of self-awareness.

Brand-wise, JNCO may be familiar enough that people might want to rekindle their relationship with it (I certainly left feeling nostalgic enough to wear the free hat I got from the event to work today), but I'm not entirely sure the fashion crowd en masse will readily embrace the brand un-ironically, nor today's hyper-brand-aware, super savvy menswear consumer. That said, I could definitely see a shop like VFILES stocking a few of the heritage styles. Overall, JNCO's new offerings are great for a self-reflective walk down memory lane, but its place in the context of modern style remains undetermined.