Every four years, the world turns its attention to sports that are often ignored. We root for football, basketball, and baseball all year round. Hell, those athletes have their own mascots and cheerleaders. You can even buy bobbleheads and jerseys bearing their names.

But the marathoners, high jumpers, and swimmers that we’re suddenly cheering for when the summer Olympics roll around have been on the track and in the pool nearly every day since they were youngsters. They’ve long had to sacrifice short-term gratification for long-term results. But it’s the joy—and not the fear—of missing out that they've experienced.

As Michael Phelps, the most decorated Olympian in history, describes it, he’s always been different from his friends. But it’s never bothered him. In fact, he wouldn’t have it any other way.

He eats, breathes, and lives swimming. He works out twice a day, three days a week in the water and hits the weight room in between. He goes to bed early, tracking his sleep every night, and is among the first ones at the pool in the morning. When he’s not training, he’s recuperating, shivering in a tub of ice or getting pummeled on a massage table. That’s how you win a record 22 Olympic medals, 18 of them gold.

What he does in the dark, when no one’s watching, will prepare him for the bright lights of competition. He doesn’t have a huge supporting cast or team of experts; it’s mainly his longtime coach and mentor, Bob Bowman, his fiancée, Nicole Johnson, and his strength and conditioning coach, Keenan Robinson. But he does have a disciplined and detailed regimen that will propel him towards Rio, his fifth and final Olympics. A day in the life of Phelps is grueling, and it looks something like this. 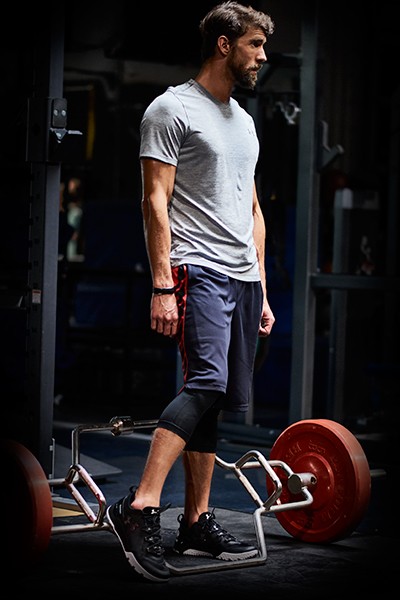 He wakes up and gets ready to head from his home in North Scottsdale, Arizona, to the pool in nearby Tempe for his first of two workouts that day. He quickly fuels up with cereal or an energy bar.

It’s time to get into beast mode. Despite the fact that he’s been diving into the pool day in and day out since he was 7 years old, the plunge remains surprisingly tough for Phelps, who says it’s one of the worst feelings in the world for the majority of swimmers. “There’s one thing I think we all hate: getting into a cold pool,” he says.

But unlike mere mortals who share the same trepidation about facing the elements, as soon as Phelps has made the transition, there’s no turning back. “Once I’m in the water, I’m ready to do my job,” he says. “I know what I need to do.”

And what he needs to do is swim. The focus of the first pool session is detail work, technique, kicking, and aerobic improvement. Next come core and leg exercises on dry land for 45 minutes on Tuesdays, Thursdays, and Saturdays. He does three separate core-strengthening exercises using TRX Suspension Trainers and bodyweight, as well as squats.

Within the all-important muscle-rebuilding 30-minute window after the first workout, Phelps eats a big breakfast—think a couple of eggs and some pancakes—to replenish the fuel he’s burned in the water and in the weight room.

During this time, Phelps can be found tending to the Michael Phelps Foundation, the Michael Phelps Swim School, his sponsorships, or media requests. But it’s also his chance to unwind between workouts. He considers it leisure time, sure, but it’s in the service of his sport. Phelps gives his body and brain time to recoup by playing video games and watching TV (he blew through every single episode of The Wire during the 2012 Olympics). Once or twice a week he hits the golf course to turn his attention from swimming to something that gives him a temporary reprieve from the otherwise all-consuming sport he’s been pursuing for nearly 20 years. 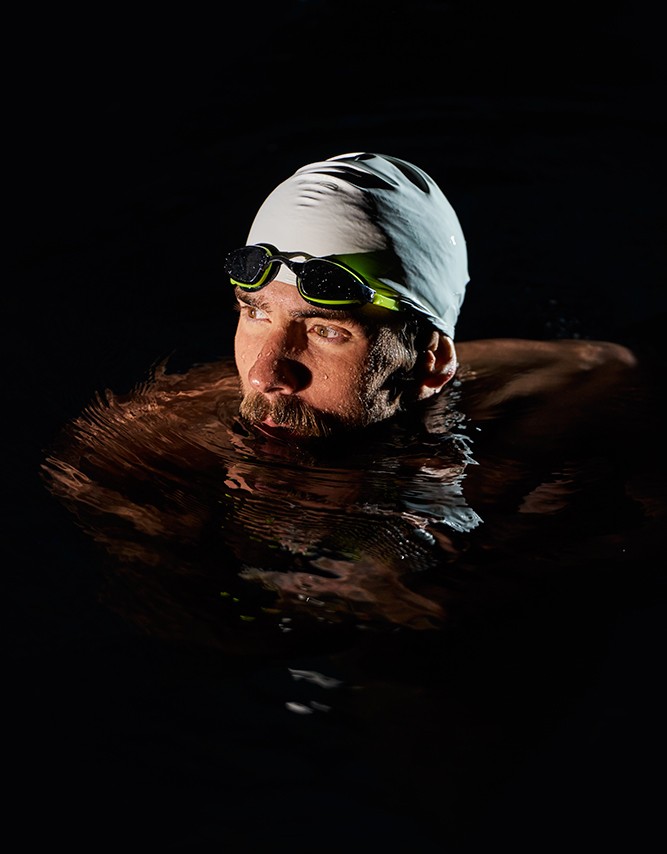 This is where Phelps really gets serious. For the second pool session of the day, he does aerobic-threshold work on Mondays and Thursdays, active rest on Tuesdays, quality sets on Wednesdays, kicking practice on Fridays, and race work on Saturdays.

He rarely gets sick, but sometimes so much lactate builds up in his arms, he can barely lift them out of the water. While talent or even good genes may trump training in other sports, “With swimming, there is no B.S,” says Phelps. “If you do want to accomplish something, you have to put yourself through grueling pain. You cannot hide from the sport. If you’re not in shape, you’ll get eaten alive.”

As Phelps sees it, there’s only so much he can do once the gun goes off. Even in the weeks leading up to a meet, he’s limited to fine-tuning his stroke or working on making his underwater turns tighter and more fluid. What really counts once he’s finally on the starting block are the years of preparation.

Phelps admits that there are many times every day that it would be easy to not give 100 percent in practice. But every time he chooses to stick with it rather than shutting down, he makes his will to win that much stronger.

He also concedes that his passion for swimming is so great, it can sometimes come across as ire. Phelps cares about getting better more than he cares about almost anything else, and if pushing his teammates sometimes means pushing their buttons, he’s okay with that trade-off.

“There are times where I do get pretty emotional and I do yell at people,” he says. “I’m not really the easiest person to train with, but that’s just because of the passion that I have for what I’m doing and for where I want to go. I want to see not only myself succeed, but I want the group that I train with to succeed.”

He shares an example of when he’s put that passion ahead of staying in someone’s good graces. Recently another swimmer was wearing fins to offset the pain of a brutal workout. Everyone was suffering through the same punishing paces, training for the closest thing swimming has to a decathlon.

Phelps knew this swimmer was selling his own capacity for pain short. He also knew that being able to push through the pain on this day would make winning that much more possible when they were competing for real. So he yelled at him to take off the fins and start racing in earnest.

“I think what I said got the point across, and he’s had a little bit of a different attitude in training since then,” says Phelps. “I’m just very intense and very passionate about what I do, and sometimes it shows more than it probably should. But I tend to think my methods work at the end of the day.”

He’s been employing these methods for a long time. He recalls a swimmer he’s known since he was 8 years old. They used to train together on the same club team. Phelps was tough on him, an admitted hard-ass, but the “kid,” now 21, has said in interviews that he’s thankful for the push. And today? He’s one of the best swimmers in the country.

Phelps’ approach isn’t his alone. He says his teammates sometimes give him a taste of his own medicine when he’s down or sore, tired or grouchy, not up to doing the job he knows he needs to do. In those moments, he’ll get what he gives twice as hard, and it’ll help him get through the set.

And his approach doesn’t just work to increase speed. What’s forged in the fire also leads to friendship. Phelps says he’s bonded with the 10 training partners he spends six hours a day in the pool with. He even considers a couple of them family.

“We joke around every day, all day,” says Phelps. “I think we do have a more relaxed environment now than we had before, and that’s part of the reason why I’ve been able to fall in love with the sport again. I think there was a time where I was kind of dreading it and forcing myself through it. But at this point in my life, to be able to get to where I want to go, I have to want to do it, and I have to enjoy what I’m doing.”

Phelps constantly has to do the maintenance necessary for his body to keep operating optimally. He undergoes cupping, a suction-based practice that pulls the muscles upward while promoting blood flow, and submerges himself in tubs of ice to suppress inflammation and tissue breakdown.

He’s also a fan of Graston, a form of bodywork that has little in common with the kind of relaxing rubdown most people associate with getting up on a massage table. The technique, as Phelps explains it, “uses a set of metal tools that essentially kicks the living crap out of you. They’re kind of like crowbars that dig into your body and just kind of break all the muscle tissue up. So, between that and cupping, my back can look pretty beat up. Like right now, I have bruises all over. It hurts like hell, but the next day and the next day after that, it does relieve a lot of the tension that I have in my back.”

What he does on land is kind of a microcosm of his work in the water. It’s painful and punishing, but it pays off. It can make Phelps grimace, but it leads to results that put a grin on his face like nothing else can. His discipline extends to the dinner table too.

“I’m constantly aware of what I’m eating and what I’m doing,” he says. “Everything is based around being able to perform at my best because I’m 30 years old. I’m not 16 anymore.” Phelps says he doesn’t eat like he used to (he was known to down huge diner breakfasts after practice) and has focused on cleaning up his diet. He recently went six months without eating red meat, upping his intake of lean proteins like chicken and fish, and has cut out alcohol.

Phelps squeezes in eight hours of sleep per night. To maximize his time in bed and evaluate how well he’s recovering from practice, he tracks his heart rate and sleep level—light, deep, and REM. If he’s not sleeping well, he might scale back his training to offset tiredness. And a week or two before a big meet, his primary goal besides getting his strokes right is to get as much rest as possible.

Sleep is just one of the building blocks used to build the powerhouse that is Michael Phelps. And like the carefully stacked stones used to construct the pyramids, every one is crucial.

In other words, Phelps is using every moment of his day—mealtime, training sessions, shuteye—to build momentum for the Olympics. There was a time when he had to force himself to train. He says that while he was preparing for the London Olympics in 2012, getting him into the pool was like pulling teeth for his coach. But now he’s one of the first ones stretching every morning, and this new focused mentality has touched every part of his life, especially in the remaining months leading up to Rio.

Every moment is fuel for the fiery point at which he transforms all the energy he’s diverted from what doesn’t matter to the one thing that does: winning. It’s his chance to finally cash in all the bets he’s placed on himself and his training. And to step back into the spotlight, with the world watching.