Even Football Manager 2017 is feeling the effects of Brexit.

The world's most popular football management simulator is renowned for its incomparable level of detail and this year – in addition to analysing who the sport's next big things are going to be – they've tried to predict how a political earthquake will shake up the beautiful game.

Football Manager 2017 – which is released on November 4th – has included a Brexit simulator, which deals with the consequences of Britain leaving the EU. In game, players that 'managers' sign from the EU will need to get work permits to play for their new clubs.

FM 2017 predicts Scotland will leave the UK to stay with the EU. 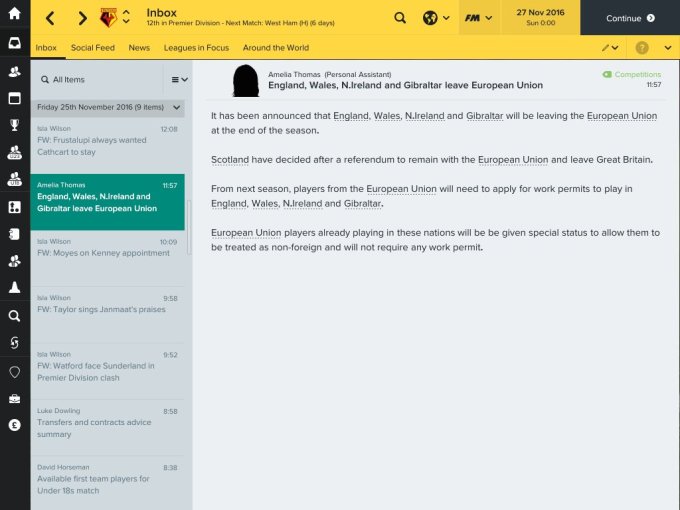 In an in-game message that was show by Football Manager on Twitter prior to the game's release, players are told that Scotland has decided to leave the UK in a second independence referendum and stay with the European Union.

"If you only had four non-UK players per squad, that’s going to make things difficult. All of a sudden Championship-quality players are moving into the Premier League to fill up slots. That could mean the overall quality drops, and that means the TV money goes down.

Meanwhile, transfer fees go up: foreign players are worth more to British clubs because you need to make sure you make the most of those four slots, and the best British players become more valuable, and so more expensive, too.

Footballers could decide against playing for their home nation because doing so could reduce their chances of ever making it to the Premier League. Newer nations such as Kosovo could suffer, with players holding out to become naturalised and play for a higher ranked country.

There is even the outside chance that non-UK players could end up having to apply for work permits to remain in the UK the day after Brexit. It’s a tiny chance but it could happen in your game.”

At least someone knows what's going to happen.