UPDATE: Our theory was confirmed, as USA TODAY has reported that equipment manager Matias Testi was indeed the person involved in the incident with Blake Griffin.

This much we know: Blake Griffin broke his right hand on an L.A. Clippers employee's face over the weekend during a Toronto road trip. The star forward hasn't played since Christmas due to a quadriceps injury and was set to return some time soon. He'll now be out an additional 4-6 weeks because of his hand. So who is this mysterious staffer Griffin hit? The staffer is said to be an equipment manager for the team and—crucially—good friends with both DeAndre Jordan and Griffin. We did some snooping around and, well, we've found someone who appears to fit both of those descriptions.

According to the Clippers club directory on NBA.com, there are three people who work in the team's equipment department. Pete Serrano is an OG and the head equipment and facilities manager. Pete is an old head with a killer ponytail and has been with the team since 1986. He seems smart enough not to get into a fist fight with one of the teams's star players. (Also, there's no evidence on social media of him hanging with Griffin or Jordan.)

Then there's equipment/facilities assistant Thomas Smith. We were only able to find one photo of him online via his LinkedIn page. Thomas could be a worthy candidate because he looks young enough to make some mistakes. But, like Serrano, Thomas' social media presence is free of associations with Griffin and Jordan (granted, both Serrano's and Thomas' social media footprints are pretty small). That's not the case for assistant equipment manager Matias Testi, however.

Testi is the only member of the Clips' equipment team who seems to be buddies with both Jordan and Griffin. We found his Twitter page and to our surprise his feed is littered with retweets involving DeAndre and Blake's handles. 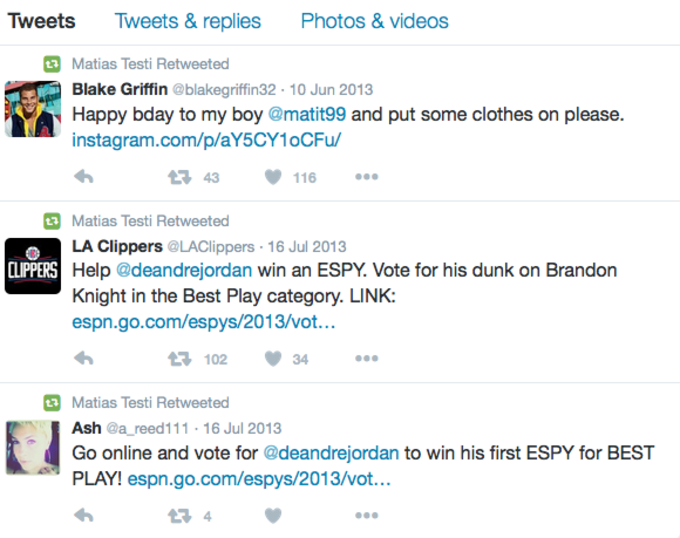 We then hit the link to Blake's Instagram Matias retweeted which lead us to this birthday shoutout:

And to this picture of Testi being included in Blake and DeAndre's "Ratpack":

Jordan, Blake, and the rest of the team also support Testi's clothing line:

"Datum, a clothing line dreamed up by Clippers assistant equipment manager Matias Testi and three of his friends, has gotten incredible support from players within the organization.

Sunday, Griffin and Jordan wore the line’s hats and Barnes hit the red carpet wearing one of the line’s shirts.

Earlier in the week, Jordan sat for two hours at Kitson, a clothing store in Santa Monica, to sign autographs, helping market the brand. Players on the team, including Paul and Crawford, promoted the event on social media."

Whether Blake put his hands on this man we still don't know, but we do know that Testi had Blake wear his line of hats and shirts in public. Blake even rocked the Datum Chainsaw Hooded Sweatshirt on the website's homepage.

Was modeling a $98 hoodie with a chainsaw logo the last straw? That's up to you to decide.