On April 28, against relegation-threatened Hull City in what was likely his final appearance in a Liverpool shirt (or that of any major European club), Balotelli had only 22 touches of the ball. He’d receive a pass, and Liverpool’s delicate touch-n-go build-up play would stall—not unlike when an NBA wing is hell-bent on playing hero ball. With each touch, Balotelli would look up, freeze, take precious seconds to survey his situation, and take one of three options: Shoot (wildly), pass (erratically), or dribble (to nowhere).

A player once regarded as talented enough to make “something out of nothing,” Balotelli actively did nothing. His lone touch in the penalty box, where he’s thrived during the highest points of his career, ended with an imaginative and well-struck, but ultimately hopeless back-heel shot.

As halftime neared, his midfielders began ignoring their lone striker, looking him off before cycling the ball to another one of their own. Liverpool’s attacking midfield trio of Raheem Sterling, Philippe Coutinho, and Jordan Henderson passed Balotelli the ball just 12 times. Those three core teammates, who’ve grown-up together for years now, saw him as a wrench in their clockwork. After halftime, Balotelli had one solitary touch of the ball before being yanked for someone else, anyone else. Against the 16th-ranked club in a league of 20.

It wasn’t supposed to be this way, but for Balotelli and Liverpool, an insouciant relationship is a fitting, if unfortunate outcome.

Mario Balotelli’s dazed and confused season with Liverpool actually began before he even signed for them, back in early August 2014, when Balotelli was actually playing against the Reds. Before a summer exhibition match versus Liverpool—one of those gassed “Guinness Cup” kickabouts—the then-A.C. Milan striker was brought up in a press conference to Liverpool manager Brendan Rodgers. Liverpool had just sold Luis Suarez to Barcelona for $110 million, and for the British tabloids, the Liverpool-Milan match was a prime opportunity to get Rodgers’ quick thoughts on Balotelli on record. Rodgers, an exuberant, sometimes cartoonish man who’s quick to praise, predictably gave bright quotes on Balotelli, which were then predictably warped by the dailies into rumors of a transfer.

By the following afternoon, Rodgers was in front of the press scrum once again, batting down the day’s easy-to-click headline. His words would also, in hindsight, ground Balotelli’s Liverpool career arc before it's origin point—Rodgers couldn’t possibly imagine what he would do with Europe’s most infamous young black millionaire.

“I can categorically tell you Mario Balotelli will not be at Liverpool.”

Three weeks later, at the edge of the transfer window shutting, Balotelli was introduced in Liverpool as the club’s marquee summer signing, a $24 million “steal,” according to Rodgers, who quickly flipped his tune on Balotelli. Of course, however, over those three weeks, Liverpool was rebuffed by just about every available elite striker on the market. Five months later, Rodgers would admit as much:

“We had attempts for other strikers that didn't materialize for one reason or another, so it left us right at the end of the window with a decision on whether just to go with what we had, when experience told us we were too light, or take a calculated risk on a player who has quality and then could we get it out of him consistently?"

To Rodgers, Balotelli was a last-ditch promise bin buy to save face after striking out on replacing Suarez—a fact nobody wanted to admit to at the time, because, well, the idea of Balotelli coming back to England was too much fun.

In his pomp, Balotelli was an entertainer’s dream. Blessed with a carved, muscular frame and natural athleticism, he would roar on the pitch. Too strong, too quick, and too technically brilliant. During his prodigious teenage years at Inter Milan, and then at Manchester City, he’d put those attributes to some use, but more often than not, the joy Balotelli brought as a public figure in Manchester would come from his off-the-field wackiness. He’d throw darts from windows at youth players. He’d show up at women’s prisons looking for a tour. He’d accidentally shoot off too many fireworks in his bathroom and light his house on fire. Hell, he’d even fight his own manager. 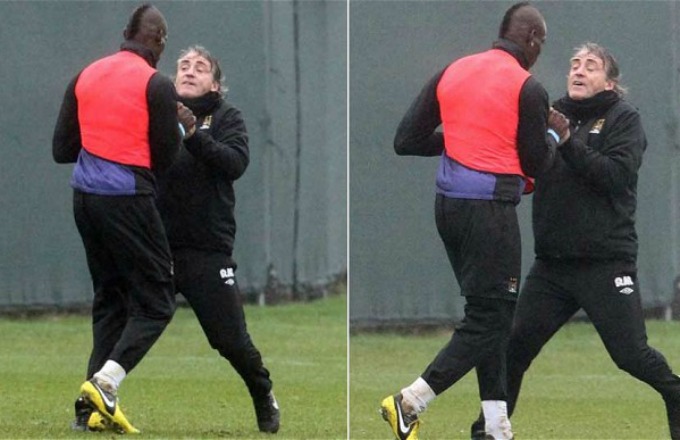 How fucking awesome is that? Balotelli, a soccer scout’s prototype, became a counter-culture figure with a cult following that included, most famously, Drake. But that was back in 2010 and 2011, when a 20-year-old Balotelli was still young enough and productive enough to get away with habitually line-stepping in-between scoring goals. Manchester City won the English Premier League title because of Balotelli’s assist (the only of his Premiership career) on this goal:

Which was then followed by this lightning bolt against Germany in Euro 2012:

Since that once-transformative moment, Balotelli’s career has stalled. A 2013 move to A.C. Milan was meant to galvanize Balotelli—he’d finally feature as a team’s premier goal-scorer and return to Italy in a homecoming for the ages. Instead, he struggled with the pressure and on-pitch attraction of being Milan’s main man, and was treated as a pet by the Italian ruling class. Paolo Berlusconi, brother of Milan owner and three-time Italian Prime Minister Silvio Berlusconi, once referred to Balotelli as “our household's little nigger.”

The move back to England, and especially to a club like Liverpool that Rodgers has turned into a haven for talented but mistreated young stars, was lauded. Rodgers would help Balotelli consistently tap into his potential, as he’d done with the aforementioned Sterling, Coutinho, Henderson, and later, striker Daniel Sturridge. With Balotelli sliding into the lineup next to Sturridge, Liverpool would play the same blistering style that scored over 100 goals in 2013-2014.

Instead, Sturridge got injured early on (and has remained so for most of the season), and Balotelli has been left without a running mate. Isolated up top and unsuited to Liverpool’s style, he scored twice in his first 15 appearances before being frozen out of the team in November, only to cycle back into the XI every few weeks as injuries to Sturridge and fellow back-up strikers Rickie Lambert and Fabio Borini mounted. His constant ghosting between the team and the reserves makes Instagram clips like this very, very sad to watch.

To date, Balotelli has cost Liverpool over $30 million (he earns an estimated $120,000 per week), with the only returns being a solitary Premiership goal. He’s been awful.

And Liverpool has too, scoring less than half the goals they banged in last year. They've slipped from Premier League runners-up to fifth-placed Europa League bait. Raheem Sterling, the team’s 20-year-old top scorer (already a bad sign), has managed seven Premiership goals. His fellow strikers have only combined for six total goals. The team has struggled to score altogether, but why Balotelli has been such a bust with a team wholly lacking goal scorers post-Suarez has been a point of contention amongst fans for months. While some see a potentially great player who’s been set up to fail by his manager, others rag on Balotelli’s inability to reinvent himself into the type of complete striker Rodgers requires out of his frontmen—a point that Balotelli’s agent has publicly acknowledged.

“We have seen [high pressing is] not really his game. Working with him for the period of time he's been here we have seen that he's probably someone who's better in and around the box. That level of intensity and pressing isn't part of his game. But you try to get the best out of the players you have and the qualities they have."

And after Balotelli's late penalty gave Liverpool a 1-0 win over Besiktas on February 19:

“We need to ensure that whatever level of the game we are playing at we have everyone working as a team, and once we got the penalty he stops working. So he needs to improve on that facet of his game to play in his position, rather than standing on the side of the football field.”

Although none of these criticisms of Balotelli are new, they only came from Rodgers’ mouth after Balotelli was left to languish on the bench in November. So why knee-jerkingly spend over $30 million on a player who was A) not even in consideration for a transfer during the club’s preseason, and B) doesn't tactically fit? To buy time. Fearful of a post-Suarez panic, Balotelli was brought in as window dressing on Rodgers’ pig. A mere name to sell replica kits and generate false optimism. From the outset, Mario Balotelli was never meant to function as a Liverpool player, so it’s no surprise that, seven months after initially signing, he looks as off the pace as Michael Strahan on Lip Sync Battle.

This summer, Liverpool will likely attempt to move Balotelli and his $120,000 per week wages. By the start of next season, he’ll be a 25-year-old striker whose goals per game ratio hasn’t markedly improved since he hit double-digit goals for Inter Milan at age 18. Through his time at Inter Milan, Manchester City, A.C. Milan, and now Liverpool, he’s failed to put together any sort of body of work that would justify the salary, status, and the protective HOLD ME BACK I’M BOUT TO SPAZ treatment he received from Liverpool fans against Manchester United. 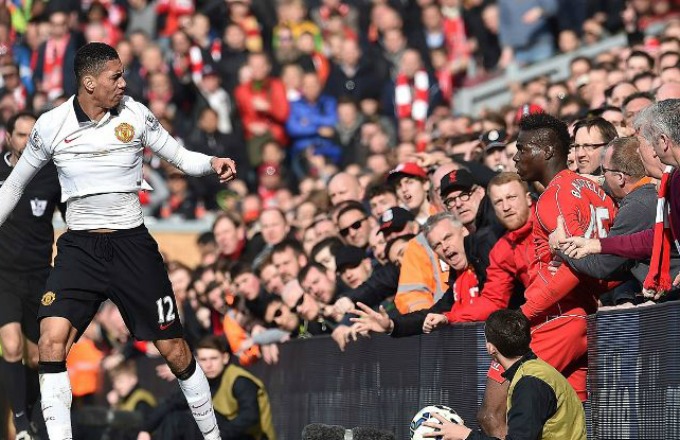 All we have from Balotelli are snapshots of brilliance diluted by his dozens of bite-sized viral moments. When thinking about Balotelli, you don’t recall and hail complete seasons, or even honest runs of good form, because there simply aren’t any. There’s a match-winning goal here, an on-pitch bust-up there, and handsome selfies every other week. Too much Balotelli and you get burned. Not enough and you wonder why he’s even around your team.

Right now, Balotelli has no idea what he’s doing around Liverpool either.