Ever since Oregon started trotting out a gazillion new uniforms each season, the rest of college football has been playing catch up as they attempt to get with the times and rock the most outlandish jerseys they can think of. Don't get us started on Maryland. 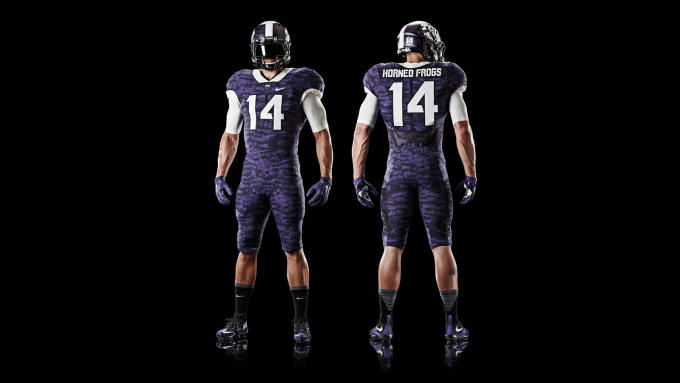 TCU is latest team to get perhaps a tad bit too creative with its new uniforms. Playing off the scaly skin of its mascot, the horned frog, Nike teamed up with the university to create uniforms that mimic that outer layer of armor, and the results are, uh, interesting. Three new uniforms (home, away and alternate) dropped on Nike's website, featuring an all purple get up, a gray and white iteration, and an all white version. The unis sort of just look like camouflage, since Nike couldn't put actual frog scales on them (BUT HOW DOPE WOULD THAT HAVE BEEN), but A for effort?. Either way, a frog may not have been the best choice for inspiration.