We hate to break this to you, Heat fans, but there is absolutely no way—no way—that LeBron James is going to take his talents back to Miami after his current contract with the Cavaliers is up. Sure, he did it before, which might give you a false sense of hope. But when LeBron took off his Heat jersey last summer after Miami's crushing NBA Finals defeat to the Spurs, he did so for the final time. He's never coming back.

We have to give the Heat fans some credit, though. After LeBron left Cleveland in 2010, a lot of Cavaliers fans turned their backs on King James and booed him loudly whenever he played in the city with the Heat. But during his second game back in Miami last night, some Heat fans welcomed him with open arms and a few even pleaded with him to return to the Heat in 2016 by holding up signs.

In the Vine above, you can see two Heat fans holding up a sign that says, "LEBRON COME HOME," on it. And they weren't the only ones who made a sign for LeBron, either. This guy did, too: 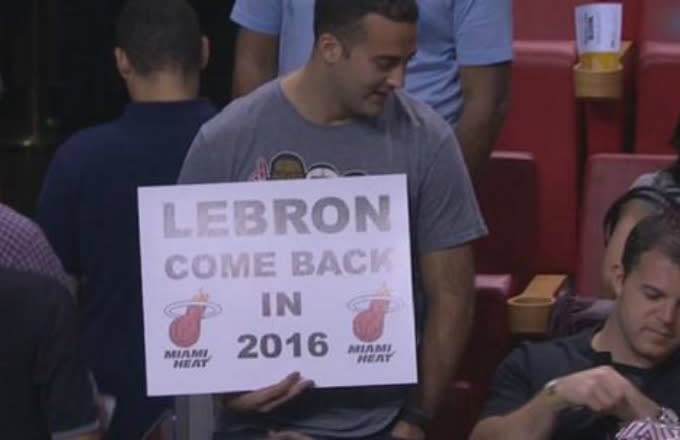 And while it's not going to lead to LeBron coming back to the Heat, it's a good effort on their part. And it's nice to see that there are no hard feelings—well, OK, not no hard feelings, but…—between the Heat fans and LeBron.

[via For The Win]