If your name was Guy Fuck, would you actually want people to call you that? Probably not, right? Even if you liked it, you'd spend your entire life either: A) Getting laughed at every time you told someone your name, or B) Trying to convince people that it really is your name. So there's a good chance that, at some point, you'd probably say, well, "Fuck it!" and change your name to something else.

Not Guilherme "Guy" Carbagiale Fuck, though. He's a Brazilian-born basketball player living in Canada (he's No. 14 in the photo above) who loves his name. According to him, the last name "Fuck"—which is actually pronounced "Foo-key"—is a German last name meaning "fox." And he likes having it, which is why he's glad that he has finally convinced the Medicine Hat College Rattlers from Medicine Hat, Alberta to allow him to use it. Originally, they didn't want him to do it and forced him to go by Guy Carbagiale. But they gave in after he basically forced them to let him use his real name. 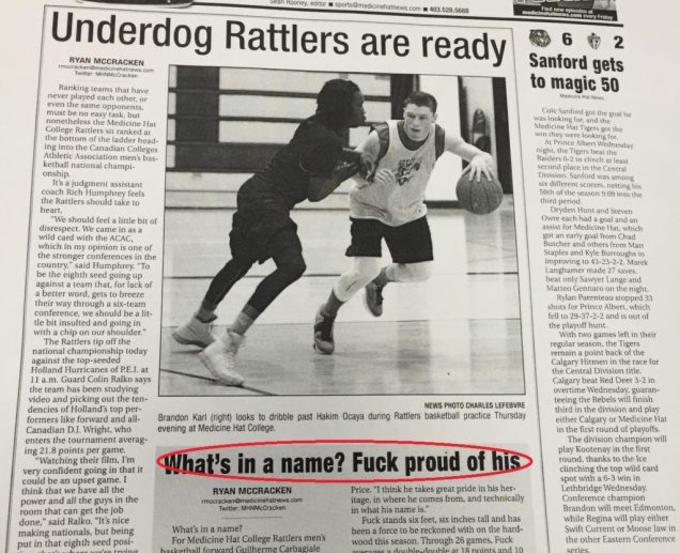 "It's my last name, I'm proud of it," he told CBC recently. "Doesn't matter if it means something bad."

And if you're waiting for us to say, "JK! JK! This is actually an Onion story!" keep waiting. Guy Fuck really exists—and if he has a say in it, he's going to make sure that there are more Fucks to go around for years to come.

"I want to have kids," he told CBC. "I want to spread the Fuck last name."

Do you, man. Way to embrace it.