It's onto the next one for Chip Kelly and the Philadelphia Eagles. Just days after Frank Gore signed-but-didn't-sign with the Eagles because of reported concerns over Kelly's management style, the team's shifted their ACOG scope towards free agency's biggest prize: All-Pro running back DeMarco Murray. Per ESPN's Adam Schefter, Murray's flying to Philadelphia today to put pen to paper on a contract. Barring any last minute Godfather offer from the Dallas Cowboys, he'll be LeSean McCoy's replacement: 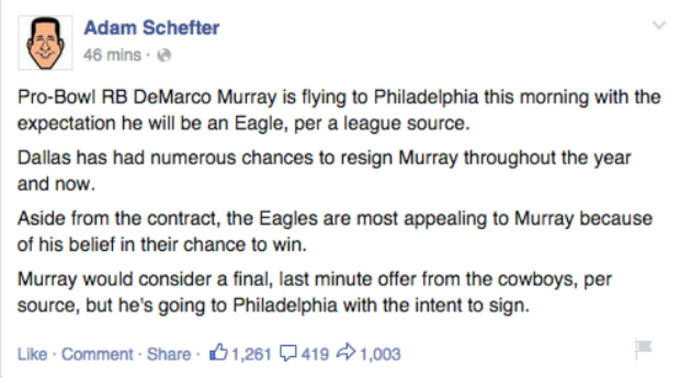 UPDATE: There won't be a Godfather offer from Jerry Jones. Perhaps C.J. Spiller will fit the bill in Dallas?

Filed to ESPN: DeMarco Murray, en route now to Philly, is expected to sign with Eagles, per source.

Dallas now calling around for other RBs. Cowboys know they've lost DeMarco Murray to the Eagles.

UPDATE: Contract details are in. $21 million guaranteed for Murray.

DeMarco Murray's deal with Eagles is expected to be 5 years, $42 million, including $21 million guaranteed, per @mortreport and I.