Dean Smith, Hall of Fame head coach of North Carolina and winner of two national titles, died "peacefully" at his home in Chapel Hill Saturday night at the age of 83.

"We are grateful for all the thoughts and prayers, and appreciate the continued respect for our privacy as arrangements are made available to the public," the Smith family said in a statement.

Smith, who coached Hall of Fame players like Michael Jordan, James Worthy, Bob McAdoo, and Billy Cunningham, led his students to 11 Final Four appearances and leaves behind a coaching tree that extends out to other famed leaders such as Larry Brown, George Karl, Mitch Kupchak, and Roy Williams.

His extraordinary impact also had a reach far beyond the painted lines on what is now known as the Dean E. Smith Center, where he left the game as the winningest coach in college basketball history. Smith was well respected for being one of the more vocal coaches politically, standing up for basketball integration after the Supreme Court's Brown v. Board decision and even going so far as to integrate a local restaurant and help an African-American graduate student move into an all-white neighborhood.

UPDATE: President Barack Obama has released a statement on the passing of Dean Smith: 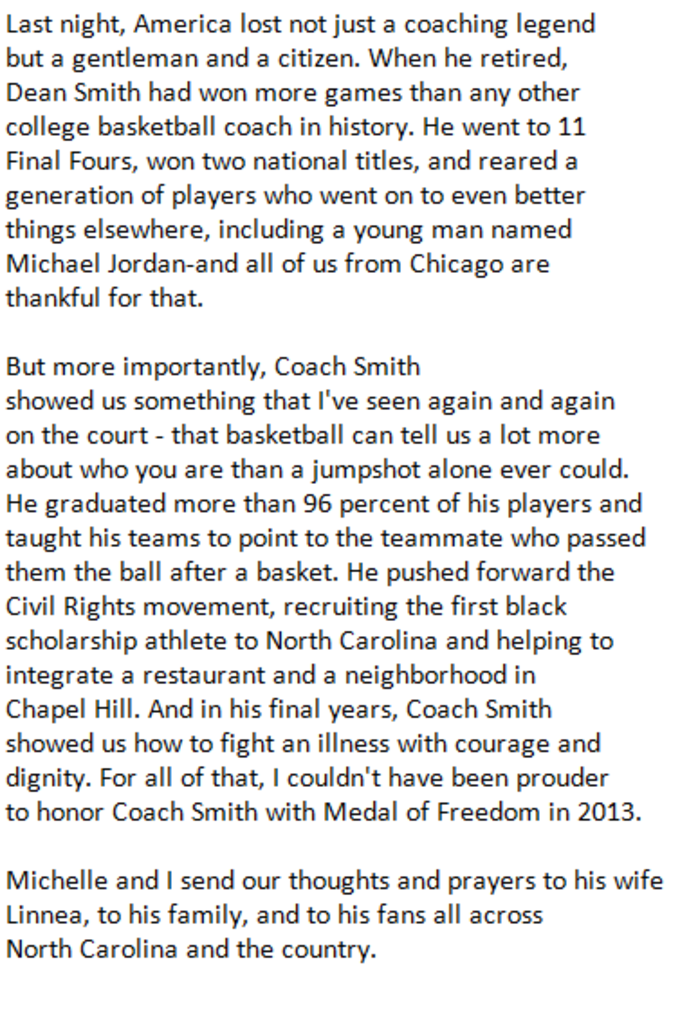 “Other than my parents, no one had a bigger influence on my life than Coach Smith. He was more than a coach – he was my mentor, my teacher, my second father. Coach was always there for me whenever I needed him and I loved him for it. In teaching me the game of basketball, he taught me about life. My heart goes out to Linnea and their kids. We've lost a great man who had an incredible impact on his players, his staff and the entire UNC family.”