Did Roger Goodell or anyone from the NFL see the video of Ray Rice punching his then-fiancée Janay Palmer in an elevator at the Revel Atlantic City hotel and casino prior to yesterday when TMZ Sports released it? On Monday, the league said no.

"We requested from law enforcement any and all information about the incident, including the video inside the elevator," an NFL spokesman told TMZ Sports. "That video was not made available to us and no one in our office has seen it until today."

However, TMZ Sports just released a new report and, according to several Revel sources that they spoke to, the NFL never saw the tape because they never bothered to ask for it. According to those sources, Revel would have given a copy of the tape to the NFL if they had asked for it—TMZ Sports says that the hotel gave a copy to police and also gave one to Rice's lawyer—but that the league never reached out to them about it.

If this turns out to be true, it actually wouldn't be a total shock. Last month, Pro Football Talk's Mike Florio appeared on The Dan Patrick Show and essentially said the same thing that TMZ Sports is saying now. He claimed that the NFL never bothered to reach out to the hotel, police, or Rice's lawyer about the elevator video featuring Rice and Palmer.

"I don't know why they didn't do it," Florio said. "I don't know whether they tried and Rice stonewalled them. But either way, they could have gotten [the tape] if they really wanted it."

It's also worth noting that, last night, TMZ's Charles Latibeaudiere did an interview on Fox Sports 1 and revealed that several sources at Revel told TMZ that someone from the NFL did go to the hotel to watch the tape. But he was unable to provide any names.

"We are assured that someone from the NFL—it wasn't Roger Goodell, we know that—but there were people from the NFL who came and saw the video," he said. "So now the question becomes how much of that information got back to Roger Goodell, and did he ever see an actual copy of the video?"

Confused? Yeah, us, too. So it's pretty clear that the NFL is going to have to continue to answer questions about the video and what they did or didn't know about it. But for now, they've released another statement that sounds pretty much exactly like the statement that they released yesterday.

"Security for Atlantic City casinos is handled by the New Jersey State Police," the league said in a statement released this morning. "Any videos related to an ongoing criminal investigation are held in the custody of the state police. As we said yesterday: We requested from law enforcement any and all information about the incident, including the video from inside the elevator. That video was not made available to us."

Stay tuned for new updates to this story.

The New Jersey State Police just told ABC News that the statement that the NFL released today is not accurate because they "never had the video." 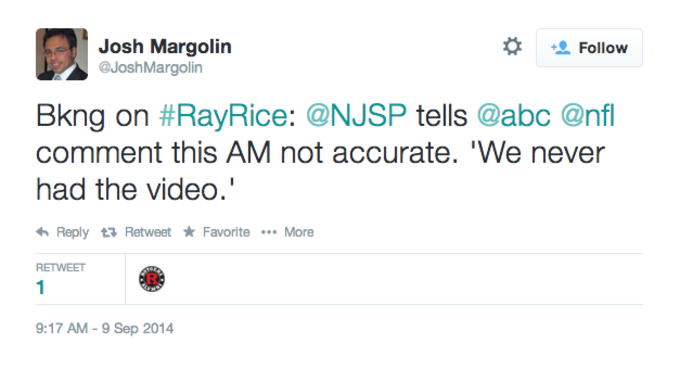