The one-day eBay charity auction featuring the much publicized one-of-one Kobe Bryant x Air Jordan I-XXX has officially ended with its final selling price being quite a significant chunk of change.

$240,100. Yup, $240K is what one lucky winner paid to be the owner of one of the most exclusive and impressive set of sneakers ever produced. At that price, each pair averages out to roughly $8000 which is pretty insane amount. Since eBay hides the identity of bidders from others, we're not quite sure who won the auction. Based on bidding details, it appears there were only two interested parties in this auction. Whomever won the auction just got a significant boost to his or her collection and hopefully, for the benefit of the sneaker community, takes the time out to take and post some quality photos.

If you were curious to see what the collection looked like up close, peep the video shared by Croatianstyle . 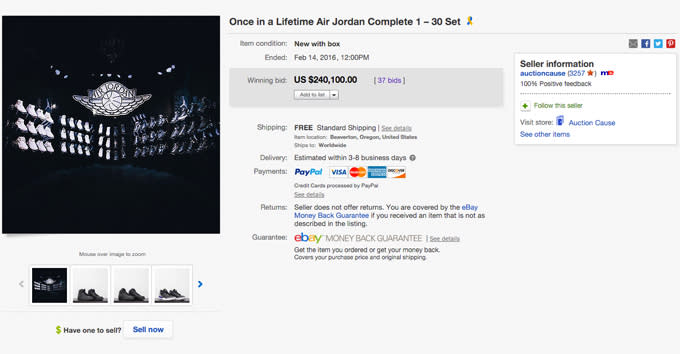