The first big snow storm of the season always causes a lot of concern and while most people are stuck indoors because of Winter Storm Jonas, New York City's sneakerheads are doing the exact opposite. A group of the bravest sneakerheads lined up for hours outside of Kith Manhattan for the Ronnie Fieg x adidas Consortium Tubular Doom.

Ronnie Fieg is one of the best sneaker designers in the industry and carries a huge following. Fieg took to Instagram to show that not even an insane blizzard can stop his releases. With two images captioned, "Nice try Jonas. Doomsday," people lined up outside of Kith Manhattan with hoods, hats, and umbrellas waiting for his latest sneaker collaboration. 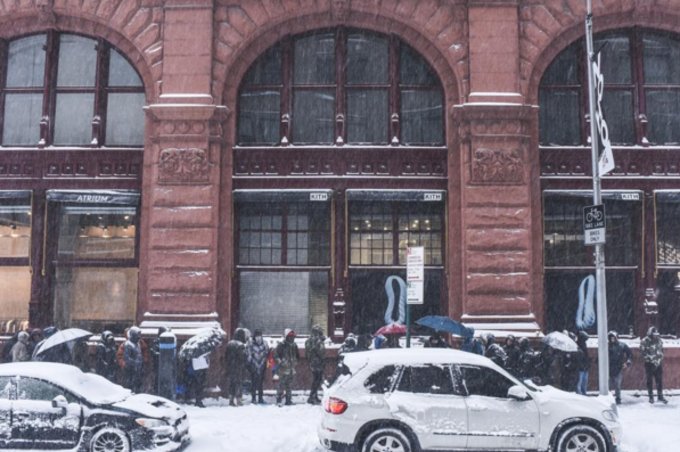 Many people expressed displeasure in the release not being rescheduled due to the weather. Instagram user chris_dah said, "This is some asshole shit, why wouldn't they just reschedule the release? No way this guy can be that money hungry to put all these people in this situation, I feel terrible for the employees and the fans. Fuck this guy."

Other users showed no displeasure, stating that the customers camped in the blizzard by choice.

Fieg replied to the comments on Instagram saying, "The reason we didn't reschedule is because there were people who traveled from different states and people who were staying in the city ready for the drop. It wouldn't be fair to them to change it up. Nobody forced anyone to come to the shop. I don't like having people waiting in the cold to buy shoes, I don't get off on that. If I would have had a full staff this morning, I would have set up the line in the shop but we were undermanned and we did everything we could. Before you say, "fuck this guy" just remember I've been doing this for 20 years and I already know the right and wrong things to do.

This goes to show that nothing can stop the will of a true sneakerhead – not even below freezing temperatures and a snow storm.