The biggest moment for sneaker culture in 2015 happened last night. After over a year of speculation and only seeing a blurry, leaked photo, the public was privy to its first look at the initial sneaker from the Kanye West x adidas collaboration. But it wasn't an official press release from adidas that provided the images. The leak came from someone much closer to Kanye: His longtime friend and barber Ibn Jasper decided to ruin adidas' rollout for the collab, which was said to happen in the next few weeks, by posting a handful of detailed photos of the grey suede sneaker.

We know that the silhouette—the adidas 750 Yeezy Boost— is a high-top and it has a forefoot strap, much like Kanye's two previous designs with Nike. Where it differs from the first two Yeezys, which both relied on retro Nike midsoles, is that it's incorporating adidas' Boost technology for the sneaker's tooling. It's not just something that looks cool from a nostalgia factor—like when Nike used the Air Tech Challenge II sole on the Yeezy II—but adding elements that turn the Kanye x adidas sneaker into a look into the future.

It's also worth nothing that, aside from the Three Stripes beneath the foot strap, there is absolutely no visible adidas branding on the sneaker which is indicative of the freedom Kanye was allowed with the brand. 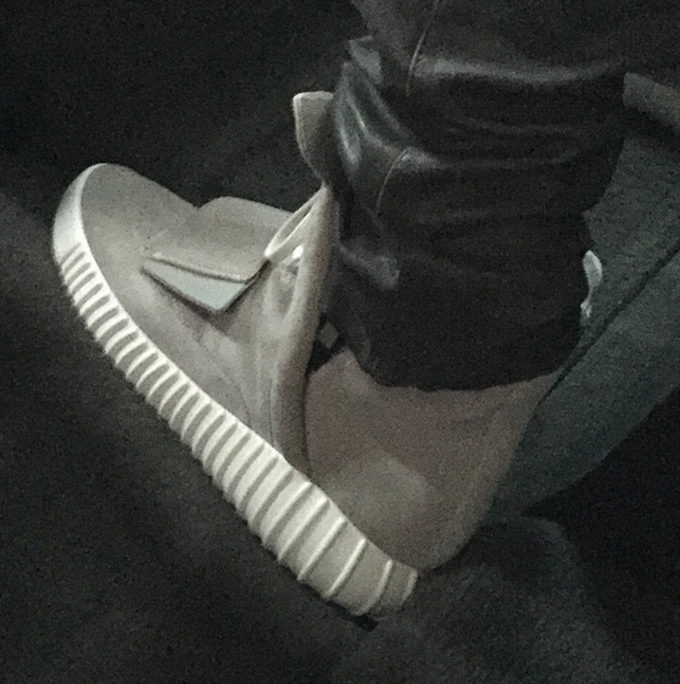 But none of us have seen them in person. That didn't stop the Internet, however, from letting out its opinion on the Kanye West x adidas collab last night. But there wasn't one consistent conversation that went on.

Some took the easy route of bashing the forward-thinking design for its disruptiveness.

While others instantly made a comparison to Kanye's work with Nike—favoring his previous signature sneaker over the current one.

There were even people who looked at Kanye's situation objectively and weighed the benefits of him going to adidas, making money off what he designs, and having creative freedom, before, of course, expressing their opinion.

But that wasn't the only concern that the Internet presented. Some were focused on adidas' decision to keep the sneaker so secretive for so long, and they were disappointed that it was revealed in the manner that it was.

Later on, though, word came out that the sneaker would be available, potentially, in more than just the drab grey that Jasper showed off. It would be getting its own "Red October" treatment of sorts, thanks to adidas' Hungarian website that listed a "Solar Red" colorway of the 750 Yeezy Boost, which wasn't available yet. As expected, that changed the tide of negative views.

Red Yeezys or not, there were optimistic people, even amongst all of the bashing. They saw the perceived backlash as an opportunity to get the sneaker that they genuinely were into.

And the more it was thought about, and ultimately broken down, it was realized that there were a lot of pieces in the new Yeezy that were homeruns with Kanye's fanbases' overall aesthetic. 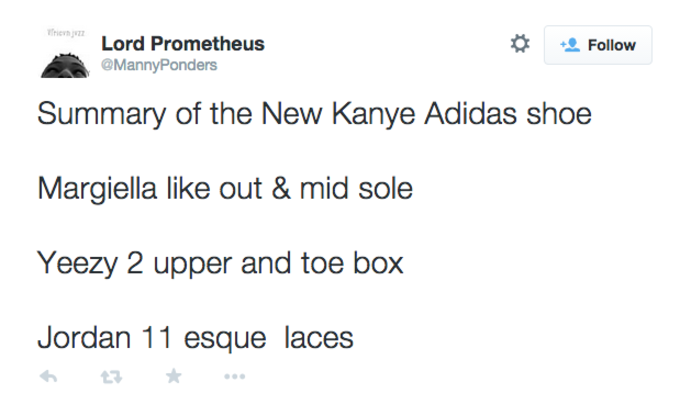 If Kanye ends up wearing an all-red adidas Yeezy on the stage of the Grammys, then it will be the blockbuster moment adidas has been searching for. It's hard to think that anything can top what happened last night. There was, after much waiting, a real energy and buzz in the air, even if people were proclaiming that they weren't into the sneaker.

Imagine the reaction that would occur if he rocks a performance that's broadcasted to millions of people, while wearing the most talked-about sneaker of the past year?

Let's wait until Sunday and see what the real response to the new Yeezy is.