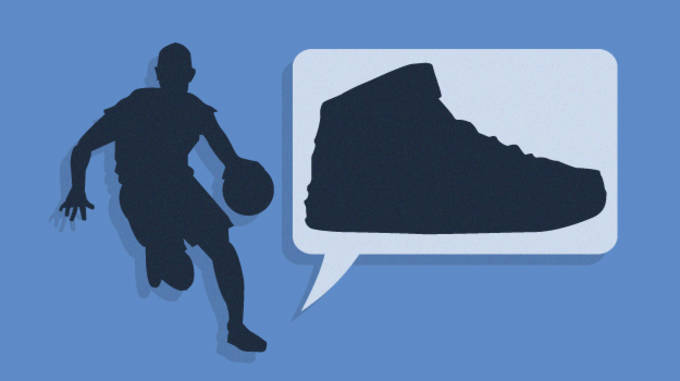 NBA players are bound to say some ridiculous things, especially when it comes to subjects off the court. Like Charles Barkley says, "only God is an expert."

When star players are interviewed about their signature shoes, most come off sounding like they are happy with a product but not super involved with all of the details. Sometimes it doesn't go so well. Here's a look at the 10 Most Ridiculous Things Basketball Players Have Said About Their Signature Shoes.

Rafael Canton is a freelance writer from Queens, NY and contributor to Sneaker Report. Anytime there is a conversation about the NBA, music, or nutella, he can be found in the thick of the discussion. He can be found on Twitter @RafelitoC7.

RELATED: Breaking Down Every Derrick Rose Signature Shoe with adidas
RELATED: The Sneakers Worn by the 15 Greatest NBA Players to Never Win a Championship

"I use the lion symbol on the shoe for inspiration as we drive towards a winning season.”

LeBron James doesn't need a lion symbol plain and simple. He might've needed to remember the image of the horse symbol, after the Dallas Mavericks ran through the Miami Heat in the 2011 NBA Finals. The LeBron 8 can't be a point of happiness, since LeBron failed to perform to the best of his abilities on the main stage of the 2011 NBA Finals, which luckily has been erased from all of our memories with his two championships in the following years.

The Nike Hyperdunk got off to a great start with Kobe Bryant headlining the shoe during the 2008 Olympics. Bryant used that quote to explain how helpful the Nike designers were in that process and how much he believed in them to make a great shoe. Bryant would eventually help lead Team USA to a Gold Medal with his solid performance in the 2008 Olympics.

"I just didn't feel like trusting anybody. There had been other people trying to get me to relaunch for many years now. I just didn't want to."

Patrick Ewing finally decided to re-release his classic Ewing 33's which were a staple of the basketball shoe market during Patrick' playing days. Patrick expressed how tepid he was when it came to releasing the shoe but thank the almighty shoe gods for business partners. Ewing decided to participate in the re-release after listening to the interest from investor and shoe collector Dave Goldberg. Now the Ewing's are back on the market and still gather interest from the sneaker faithful.

"I let my emotions out when I step on the basketball floor, it’s always been my escape, and these shoes will touch a nerve on the court in the same way I do."

This Kobe shoe is very recent, so we won't know yet what Kobe's going to do when he puts on this shoe post-achilles surgery. These shoes won't touch the same nerve that Kobe Bryant can on the court. As one oft he best players of all time, it's hard to measure what impact his new shoes will have on the court as his athleticism reaches a decline while his shoes reach a new point of innovation.

"A katana sword which was a great weapon back in the day that warriors used to use. Every little cut is supposed to be like the handle of the blade."

As much as we want to believe that a Katana sword and a shoe can share some similarities, that has to be sort of a ludicrous statement. Derrick Rose's adidas D Rose 3.0's were a good look for the brand with the addition of a smooth logo. Rose and the designers of the shoe went a little too far with the idea and concept of the shoe representing a katana sword. It's a nice idea, but very unrealistic.

"This shoe will give you the power to shatter the glass on the backboard."

Dwight Howard was having a great year when he released the adidas adiPower Howard 2, but he was also having a tumultuous year. He was demanding a trade from Orlando, ultimately agreed to stay, but then hurt his back to the point that he kissed the rest of the 2011-12 NBA season. The shoe might be bad luck, but ultimately the idea of shattering the backboard became bad luck for Howard who would sit on the shelf for quite some time after his injury.

“You can never imagine or try to predict that there would be this much pandemonium over your tennis shoe. You would hope so, that it would be crazy—not to the point of violence—but everybody wanting them, that’s a dream come true.”

The dichotomy of the basketball shoe and the lifestyle aspect is always something interesting to look into. The Nike Foamposites could be perfectly explained with this Penny Hardaway quote. After his shoes were re-released way past his playing days, fights, murders, and everything else you can think of happened due to the high demand for the retro shoes. It's an unfortunate part that probably has to strike a chord with Hardaway who would never want anything negative to come out of what's supposed to be a special moment for him. He's a retired player who gets to live out some of his old glory days with the re-release of his retro, but then has to realize that the demand leads to senseless actions.

It's not known when Charles Barkley specifically said this quote, but it has to be during the time when he had his own Air line at Nike from '94-'98. It was one of many quotes from Barkley that was able to draw a ton of attention for its off the cuff nature. Either way, Barkley had some great times in these shoes as well as some great quotes while playing for both the Phoenix Suns and Houston Rockets during his signature Nike Air series.

"If there's a kid up in the upper level, that really can't see that well but can see the blue part of my shoe or my orange shoe strings or even this silver Nike sign. That's something he's going to remember me by."

It's sort of wild that Kevin Durant says this because he will draw attention just for the great performances he can put on during his road appearances in the NBA. So far this NBA season, Durant is averaging 28.6 PPG, 6.8 RPG, and 4.0 APG on the road, while his Oklahoma City Thunder are off to a solid 13-4 start in the early part of the 2013-14 NBA season. That young fan is going to see a great player in KD rather than see the small Nike emblem on his shoe.

Rafael Canton is a freelance writer from Queens, NY and contributor to Sneaker Report. Anytime there is a conversation about the NBA, music, or nutella, he can be found in the thick of the discussion. He can be found on Twitter @RafelitoC7.

RELATED: Breaking Down Every Derrick Rose Signature Shoe with adidas
RELATED: The Sneakers Worn by the 15 Greatest NBA Players to Never Win a Championship