One of the valuable lessons we learn when growing up is ‘to never judge a book by it’s cover’, even when it comes to the criminally convicted – barring extreme/certain circumstances. It’s easier said than done and to be honest your views may change when you view this tattooed-mugshot curtsey of the Tulsa County Jail.

Here we have 27-year-old Paul Terry, who was arrested on suspicion of armed robbery with a dangerous weapon. However it’s not so much about the crime (which is still awful in itself) but in his appearance – and by that we’re talking about his interesting choice of face tattoos.

But how does he 'really feel' about the police? 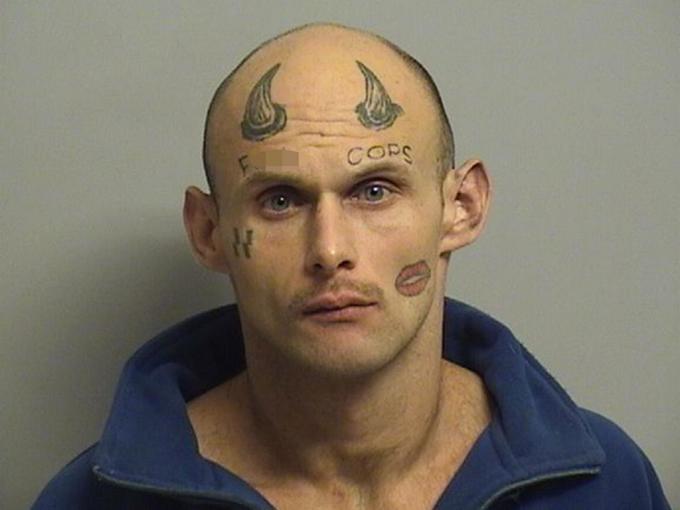 As you can see Mr Terry here has devil horns tattooed on his forehead and just below it, on top of his eyebrows, is the phrase ‘F*** Cops’ which more than tells you about his feelings for law enforcement officers. His tattoos make Gucci Mane's ice cream tatt' look like a well-rounded decision, what do you think the conversation was like between him and his tattooist?:

Paul Terry: "Hey I really hate the police and I've got this inner demon in me that I really need to let out. What do you sugggest?"

Tattooist: "You know what, I've got the perfect design just for you."

He was arrested by police officers in Tulsa after the victim, who he robbed in his flat along with his ex-girlfriend, Sonja Moro, aged 30, last Friday evening, was able describe him due to his distinctive tattoos.