Science has already proven “hanger,” what happens get when you combine hunger and anger, and being “hangry,” when someone is so hungry that they get angry, is real. It’s no wonder a study has proven judges will rule favorably in court if a case is presented to them a. Early in the morning. b. Immediately after lunch.

The study was just cited in Bank of America Merrill Lynch's report about artificial intelligence, because as you know, robots are taking over the world (Or are they?)  The study, from a 2011 research paper by Shai Danzigera, Jonathan Levavb, and Liora Avnaim-Pessoa, concluded Israeli judges were 65 percent more lenient in their rulings at the beginning of the day and after breaks such as lunch. That percentage decreases to 0 until another break. Bank of America Merill Lynch wrote:

In conclusion: robots don't eat so they won't get hungry, meaning they won't get "hangry" or "tired," leading to these biased decisions. Here's a chart of the findings below: 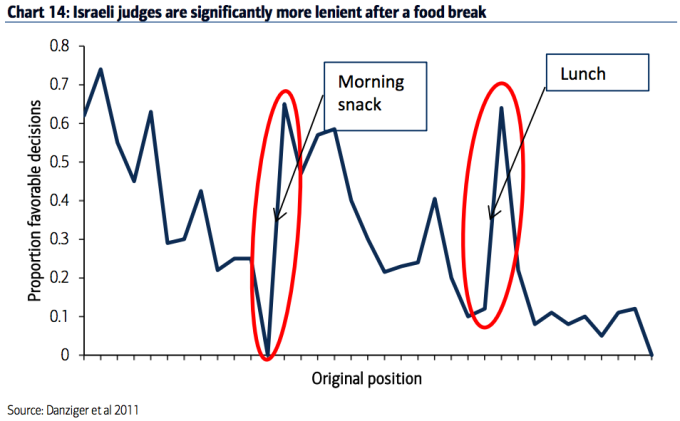 Man Caught on Camera Smuggling McMuffin to his Girlfriend in Prison