Alright, Nation! Stephen Colbert is back in the game and this time, he’s playing himself. The Late Show host made his debut Tuesday night in good old American fashion—by singing “The Star-Spangled Banner.” Joined by friends from all over New York, the beloved TV personality performed the tune in a bowling alley, in front of a field, by a water fountain, and even on a baseball field. And he was joined by a very special guest: Jon Stewart!

The last time we saw these two together, it was during an emotional send off as Colbert said goodbye to The Colbert Report. And in true Colbert fashion, he made everyone laugh while delivering an eloquent speech. "Here's the thing, Jon," he said, according to E! Online. "You said to me and many other people to never thank you because we owe you nothing. It is one of the few times I've known you to be dead wrong. We owe  you—and not just what you did for our career by employing us to come on this tremendous show that you made—we owe you because we learned from you. We learned from you by example how to do a show with intention, how to work with clarity, how to treat people with respect. You were infuriatingly good at your job."

Damn you both for being infuriatingly good at your jobs. 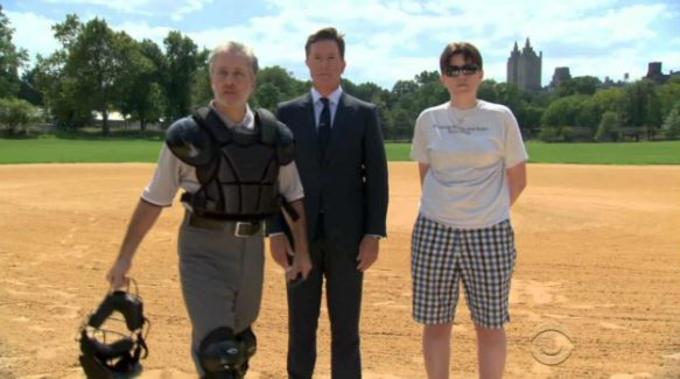