“The Catalina Wine Mixer is going to be the next Coachella,” might be the biggest exaggeration I’ve ever heard, but it’s hard not to get swept up in the idea of that happening when I hear it.

It’s a little past one in the afternoon, and I just survived seasickness during an hour-long boat ride from Long Beach Harbor to Catalina Island, 22 miles out from the California mainland. I'm talking to Sal Vona, a 23-year-old who has a passing resemblance to Chester Bennington from Linkin Park, and his friend—a bearded beast who looks as if he just emerged from the wild for the first time since Y2K—who calls himself Nick “Kickstand.” And while what Sal says about Coachella is hyperbole on his part, I think, anything is possible at this point—because this is the very first Catalina Wine Mixer. Which is to say, this could easily crash and burn, or be the start of an awesome annual event.

Until today, the Catalina Wine Mixer only existed in the movie that inspired it, the 2008 comedy Step Brothers starring Will Ferrell and John C. Reilly. The island has been trying to throw the Step Brothers-inspired party since the film’s release, with the pieces to make it happen just coming together this year, according to a spokesperson. It’s a rare “fantasy meets reality” moment, like when 7-Eleven decked out some of their stores to look like Quickie Marts a few years back.

But there’s not a lot of things that ring out Step Brothers here. The Dan Band—a musical group who’ve been featured in movies like The Hangover and Old School—will land in a helicopter later and perform, which is cool, but they weren’t even in the film. None of the movie’s stars are are here or have been announced, but there is a red and blue helicopter for lease (the Mixer in the film is billed as the “biggest helicopter leasing event in the Western Hemisphere since 1997”), and aside from the dozen or so frat guys wearing Prestige Worldwide tank tops, if you’ve never watched the film, you wouldn’t feel very much out of place. Well, unless you came in dark slacks, a long-sleeved collared shirt, and a huge backpack, like I have. That’s another difference between reality and fantasy: In this 80-degree heat under the cloudless California sky, this was not going to be a suit and tie affair like it was in the film. In the sea of bikini clad women and shirtless guys, it’s obvious I didn’t catch the memo.

I leave Sal and Kickstand at around two in the afternoon. There’s about 150 (mostly white) people here, but the place can fit another 200 pretty easily. There’s a slight breeze blowing in from the ocean, carrying with it the strong smell of sun lotion rising off of the sweating bodies of people nearby. It’s still early, but I can’t help but think: it’s sold out, where the hell is everyone? Tickets just to get into the event were $35, which got you admittance and a souvenir wine glass (that’s actually plastic), or you could have forked out $100 for VIP access, which comes with food and wine tasting. (I chose the $35 ticket because obviously.) But add on the price to even get to the island—a round-trip ferry ride could be anywhere from $70 to $100, and a helicopter ride for more than $200—and the Catalina Wine Mixer is already going to cost you a pretty penny before you try your first sip. That reminds me—I haven’t had a drink yet.

I’m scoping out a few tents that are serving wine and a woman walks up to me holding a half-filled souvenir glass in her hand. “Do youuu… do you… do you shoot vi-deo?” she asks. I can, and she asks if I can shoot a funny video of her and the man she’s with. I pull out my iPhone and start recording as they dance to the cover band that’s playing. While I message her what I recorded, she tells me she’s a breast cancer survivor. “Yeah, these are all that’s left,” she says as she grabs her breasts, “but they’re still gargantuan, aren't they?” They aren’t really, but I nod my head anyway. “Ever since I got through it, I’ve been trying to document everything.”

“Right,” I say, genuinely interested. “You probably have a different perspective on everything now.” She looks me right in the eye, then smiles.

Her boyfriend leans in and says, “it’s an inside joke.” Now I’m confused—what was the joke? the cancer? the new perspective?—but it doesn’t matter because she spills the rest of her red wine on my shoes and pants right then, so I head to the restroom to clean it off.

I remember the flask of Wild Turkey whiskey I have that security missed when they searched my backpack at the entrance. I grab a stall, take out my flask and pour two shots worth of the amber liquor into my fancy plastic souvenir cup.

It’s 3 p.m. now, and I’m back out near the stage. Things have been par for the course so far—good music, good-looking people, but complete shit show this is not. Then a short woman with dirty blonde curls walk up to me. “Are you covering the event?” she asks behind dark sunglasses. I’m sure the notebook and camera in my hands gave it away.

“Well, Will is here,” she whispers in my ear.

“Yes! I’m his publicist. He’s in the bathroom right now, and no one has noticed him yet, they weren’t going to announce it for another hour from now. Do you want the scoop?” she asks. No shit I want it. She leads me back to the restroom I was just in, and, there he is—short blue swim trunks, matching blue visor, tanned skinned, sandy blonde hair, and that sagging “Dad-bod” Ferrell has flaunted in movies like Old School. But, fuck, just one thing—it’s not Ferrell.

“Sorry man, she always does this,” Imposter Ferrell says. Yet, this guy for sure has a resemblance to him. I ask him if he gets that a lot. “My dad always got told he looked like JFK,” he says as he grabs my shoulders and shakes me, “and I get Will Ferrell!” Okay, it sucks when you put it that way. He takes off and tries to hit on some young girls who run as soon as they see him coming. 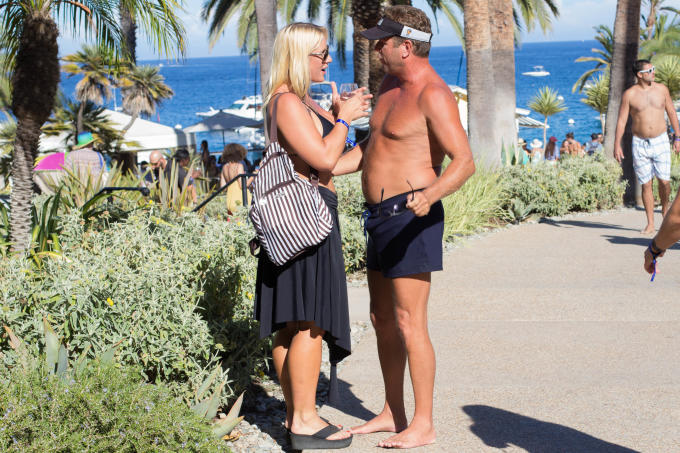 The whiskey is settling in now, and I’m making my way through the POW! BOATS AND HO’S! and I’M GOING TO PUT MY NUTSACK ON YOUR DRUMSET! being shouted from every direction. I take selfies with random people, and random people take selfies with me. The band from earlier is off stage now, and the version of “Sweet Child O’ Mine” that Derek’s (Adam Scott) family sings in the movie plays in the background, and we all sing with it.

A new band takes the stage, and the MC announces it’s led by a guy who was on the last season of American Idol, and who might be on again next season, which, I think, can’t be a good thing. Then it happens—the Dan Band helicopter flyover! Finally, something. But just as the MCs announce it to the crowd, the single helicopter, high in the sky, flies over. It lasts about five seconds, and maybe a few dozen people even notice it. “Was that it?” one of the MCs asks.

While there’s much more people here than a few hours ago, I notice not everyone is mingling. “There are too many couples here, not enough singles,” Michelle Mendonsa and Jasmine Sippy agree. “Yo, I’m going to meet my wife here!” 34-year-old Joey Spanjers manages to say through his slurred words. It was announced earlier that a marriage proposal did already happen. 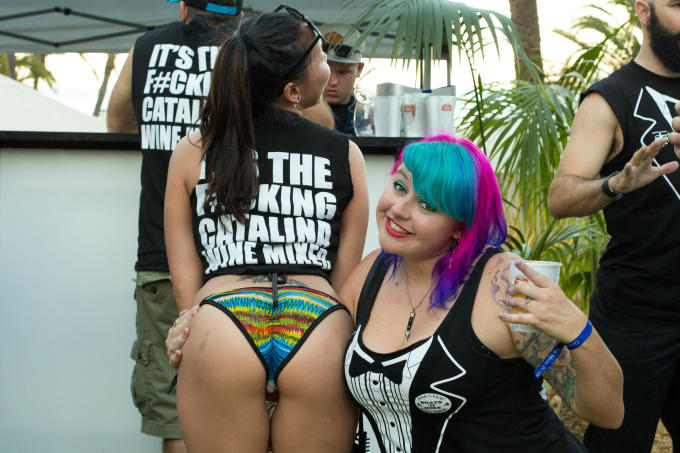 Xavier Williams, an Australian I met, says he traveled here from his home country just for the event, and that Step Brothers is just as big there as it is here. Everyone attributes the movie’s quotable lines as one of the reasons it's taken on a cult following, and warranted bringing the Wine Mixer to life. Everyone, too, hopes some of the actors will still show up. I am, too. Outside of a Chuck Liddell sighting, there are no celebs to be found.

It’s 6 p.m., and the place is packed. I see Kickstand, the bearded beast, walk up to my side. We fist-bump and I pour him the rest of the whiskey from my flask. He leaves and walks up to some girls (he’s been doing that all day, the beard works wonders), and just behind them, I see Imposter Ferrell being escorted out by security.

The sun is now dipping behind the island's palm trees, and the sky glimmers with hues of pink and orange. I start to think, does it even matter if the actors are here or not, or even if this event has anything to do with Step Brothers? There’s the newsworthiness of it, sure, but this place is gorgeous. At a point, you just have to enjoy it for what it is, and not for what it’s not. Estelle’s “American Boy” blasts through the stage’s speakers, and I’m having a pleasant, tranquil moment looking out at the sailboats bobbing in the sea. Maybe it’s because the whiskey and wine is leveling off now, or maybe it’s the contact high coming from the marijuana around me, but this is nice. Now, I’m an L.A. native, and I can’t believe it took me 28 years to finally visit this place. It would be perfect to bring a date here, sweep them off their feet, make a whole weekend out of it—and, just then, a girl walks up. She looks into my eyes, doesn’t say a word. She takes her fingers to her lips, pulls out a piece of blue chewing gum, and reaches out to smash it between the pages of my notebook. 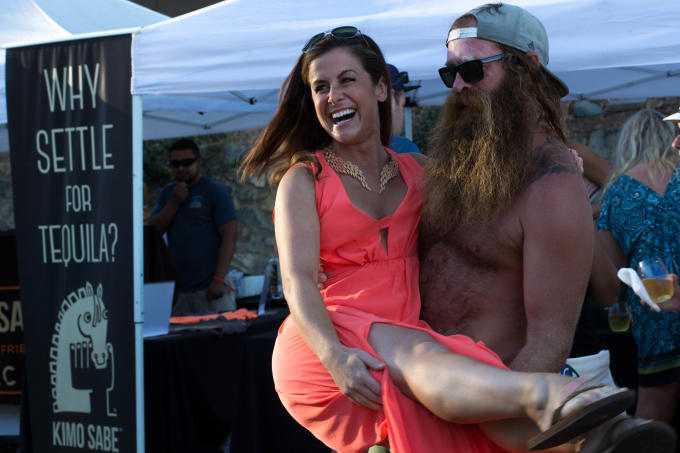 It’s 7:30 and we’re all waiting for the Dan Band to come on stage. Two women, near their early 40s, walk up to me and ask if I could take their picture. “It’s my birthday!” the one in the sleek orange dress screams in my face because I can barely hear her over the background music—then she kisses me.

The Dan Band make their appearance 15 minutes later, and about five minutes after that, a guy runs on stage and puts his balls on the snare drum, just like Will Ferrell’s Brennan does to the drums of John C. Reilly’s Dale in the movie. Now, I can’t actually see this going on because there’s so many people blocking my view with their smartphones, but it’s probably for the best. “Today is the day the music died,” Dan jokes.

The band plays covers of Christina Aguilera and TLC, and the purple lights from the stage illuminate the mist forming above the crowd from the blunts being smoked. The night ends when the Dan Band plays “Por Ti Volare,” the Pavarotti song that Brennan sings at the end of the film.

I walk back to the ferry, and stop under a sign hanging over a narrow road. It’s an ad that leads with the words, “Escape to Catalina!” The Catalina Wine Mixer, in real life, might not have been what everyone hoped it would be. It was never going to be a perfect recreation of the event from the film (the mixer in the movie was actually filmed in nearby Palos Verdes), but, like Step Brothers, it offered a momentary escape to a group of people who were willing to buy into the fantasy.