We all have that moment in life, that spark of purpose that illuminates the path ahead and removes all doubt as to the meaning of the universe. For some, that moment occurred during one of the many McConaughey quotables during the first season of True Detective. For others, like young Zea (who wants to keep his full name under wraps), that moment occurred on Snapchat while hiding under a female companion's bed upon the early return home of that companion's mother.

Zea's Snapchatted struggles quickly ripped the internet in half, inspiring nods of approval from thousands of admirers and forming the basis for an inspiring story of, well, getting interrupted in the middle of a relatively private activity and turning that interruption into a visual novella of epic proportions.

Zea tracked me down on Twitter shortly after our original story, revealing himself as the true Snapchat hero: 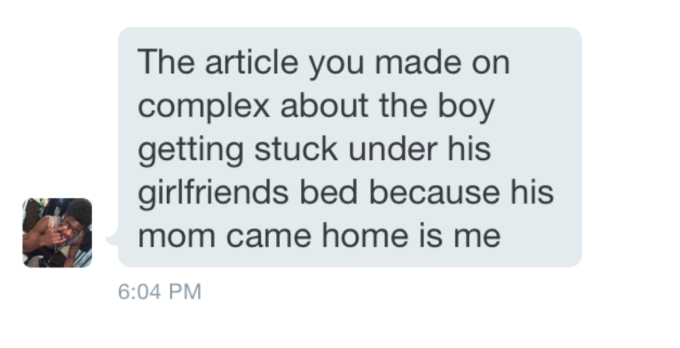 To begin, could you walk us through the treacherous series of events which led to that fateful Snapchat journey?

This one night the girl asked me to come over—she said her mom doesn't get off until 10:30 and it takes her about 10 minutes to get home. So I agree with the plan. I had my homeboy, Pat, drop me off. But it didn't go as planned. I arrived at her home around 9, I go to her room and jump on her nice little bed. And then we cut on Netflix 'cause you know that's how everything starts: "Netflix & Chill." So you know, we watching White Chicks on Netflix—I began to make my move like an hour into the movie. I peeped she was giving me hints cause she started giving me "the look." So me, I tried to play it cool by acting like I wanted space, so I tell her move over knowing she was going to say "Oh my god, you don't want me by you," and that's when it all started. I said "Nah bae, I want you closer," then I grabbed her arm and pulled her closer and started kissing her. I'm on top thinking, "Oh yeah, I'm ‘bout to get me some," so I take off my shirt and her shirt. I'm still kissing her all across her body, but not the vagina area—I'm not on that, I don't know what she have. Then I go to reach for the Mag in my wallet—she already knew what was up cause she grabbed the wallet before me, bih. So I take off her pants and pull mine down and put the Magnum on. Mind you that took like 10 minutes to get that whole process set up, so now it's like 10:10. So we having sex and I'm having fun. Her window is in the front of the house, and all of a sudden I see lights shining through the window. We stop, she looks out the window and says, "Oh my god it's my mom." My first instinct was "Hide bruh." So I went under the bed. So I'm under the bed shirtless with pants and socks on. She says, "Hold on, I’ma go talk to my mom so she won't come in my room, then I’ma lock the my room door so we can finish.” In my mind I'm like, “Finish? Hell nah, I ain't about to die over some bap ass vagina.” So she goes, puts on the pants and shirt she had on—no panties—and goes to talk to her mom. That's when I texted Pat, TJ, and Tata to slide and come scoop me. They was like 10 minutes away so I was like, “Damn, I'm stuck here for 10 more minutes, might as well get on Snapchat.” So I make those little pictures showing my struggle. I'm usually a clown on Snapchat so I made a few funny ones like, "Just talking to the wood." One Snapchat I noticed the time and that pissed me off. It was 10:21. I laid under the bed for a good seven minutes. Then she came in the room and locked her room door, so I came from under the bed. I told her, “Sorry but my homeboy's coming now I got to go." So I left through her window and walked down the street for my homeboys to come and pick me up.

How often has life forced you to hide under someone's bed?

Haha, that was my first time being forced to hide under a bed. I watched plenty of movies so I already knew what to do in that situation. 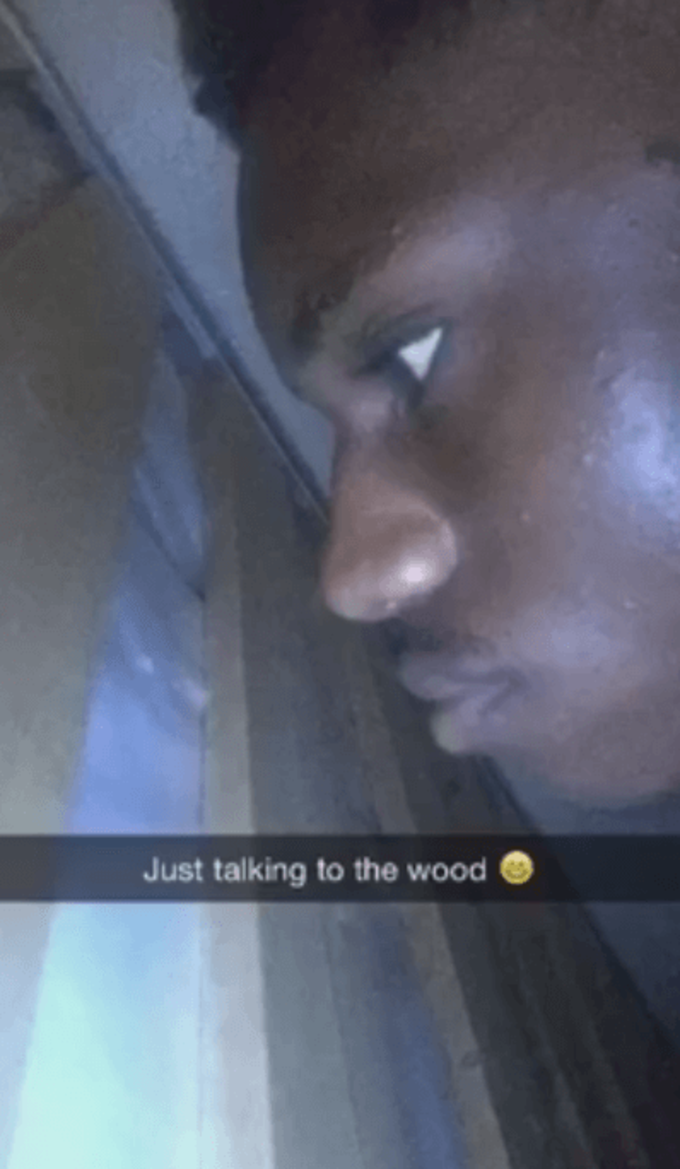 When you talked to the wood, what exactly did that wood say?

The wood was talking shit I swear, I felt like that wood was saying, "You ain't the only one that's been here you know." And, "You lucky it wasn't her dad, bro." And, "How the fuck you gonna get outta this, b."

What kind of wood was it?

To be honest I think it was the wood used to make desks.

When you fell asleep, were you able to get the recommended eight hours of sleep or did you just power-nap and periodically check to see if the coast was clear?

I didn't really fall asleep, I just put that just to make fun of the situation I was in.

Are you currently in school? Tell us about yourself.

I'm currently an 11th grader attending Boyd Anderson High School. I play varsity football and will run track. I'm a real laid back person who just chills and work out. I've been told that I'm very funny too, which I am.

What did your classmates think of your Snapchat story exploding into a ridiculous Internet phenomenon?

They was going crazy, they was like, “Zea, you’re viral now.” But they still treat me the same way.

Do you think the second season of True Detective was anywhere near as good as the first?

I never watched that show.

I don't really listen to Kanye.

Now that you're internet famous, what are your plans?

I want to be on the show Wild ‘N Out with my homeboys, I want to get not only my face up there but my football team and homeboys’ faces up too.

Will there be a sequel to this Snapchat mini epic?

This interview has been edited and condensed.