Writer Jake Halpern profiled the infamous Darren Wilson for the New Yorker, and it is interesting to say the least. Halpern talked to the former police officer about that fateful day in Ferguson, Mo., his childhood, how he came up the ranks in various police forces, among other things, and got some great quotes from the man who sparked social unrest across the country. Wilson's responses to Halpern's questions have racist undertones, and it's not at all surprising. What is surprising, though, is the fact that his mentor, Officer Mike McCarthy, has a different take on race. McCarthy, who is Irish-American, grew up around African-Americans and knew how to relate. Wilson turned to him during his time in the Jennings police department—a department that was shut down due to systematic racism—when he felt he couldn't relate to the residents. McCarthy told Halpern he appreciated Wilson's honesty and determination saying:

“Darren was probably the best officer that I’ve ever trained—just by his willingness to learn.”

McCarthy also shed light on the lack of police training in terms of communication saying:

“If you go to an academy, how much is on that? Basically, nothing”

The writer pointed out that a survey taken by the Police Research Forum showed that cadets "receive fifty-eight hours of training in firearms, forty-nine in defensive tactics, ten in communication skills, and eight in de-escalation tactics."

McCarthy recalled a time when he was in an adopted student program and hung out with the kids at ball games, etc. That experience strengthened his relationship with the community:

“I wasn’t the police to them, because they knew me on a personal level, rather than what that badge stood for. He continued, “People are amazing, and you have no idea what’s going on behind that façade until you stop and try to know.”

McCarthy also happens to be gay and knows what it's like not to be created equal in a country that states differently in its constitution.

It's mind-boggling how a policeman can learn the ropes from someone like McCarthy and still say the things Wilson said in this profile. He brought up a blind African-American woman whose kids "ran all over the mom, and said, "They’re so wrapped up in a different culture than—what I’m trying to say is, the right culture, the better one to pick from.” Halpern asked him to further explain that statement in which Wilson replied, "Pre-gang culture, where you are just running in the streets—not worried about working in the morning, just worried about your immediate gratification." That's not that bad of an explanation right?

How about this statement regarding Mike Brown's upbringing?

"Do I think he had the best upbringing? No. Not at all.”

Plot twist! Darren Wilson's mother was a kleptomaniac who's favorite thing to steal was money. She consistently wrote bad checks and stole money from his Boy Scout troop. Seems like Wilson didn't have a good upbringing either. Maybe that's why he's in the situation he's in. He also feels like younger generation in St. Louis used the area's racist past as an excuse, telling the writer, "People who experienced that and were mistreated have a legitimate claim, other people don’t."​ In regards to the Justice Department's Ferguson report that concluded the department was racist, Wilson says he numbers are "skewed" and that, "You can make those numbers fit whatever agenda you want" But get this: he hasn't read the report because he's "not going to keep living in the past." It's not like his new house and legal expenses were paid by racist donors. 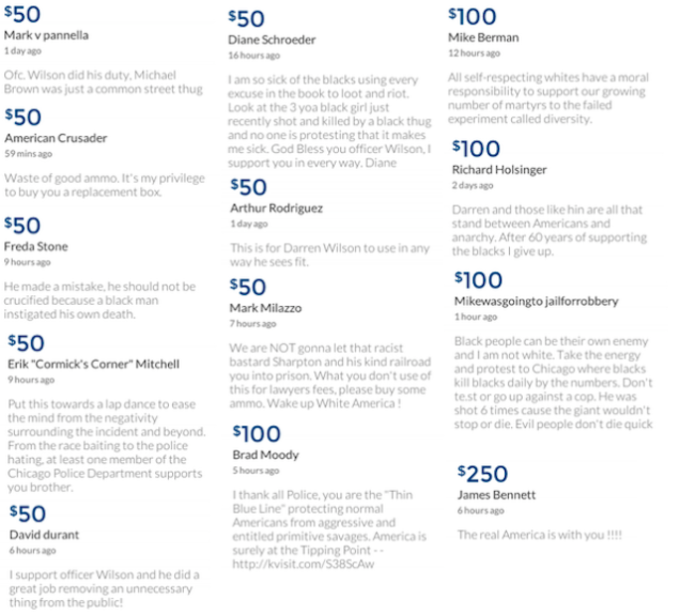 Darren Wilson Spoke at a "Hunt for Justice" Event This Weekend