It's extremely difficult to write this review as I broke my eyeballs the other night from rolling them too hard during Irrational Man. Yes, a Woody Allen movie in 2015 should be approached with caution, but with his latest flick, the prolific writer-director has reached peak insufferable. Irrational Man follows a cookie-cutter Allen formula in many ways—troubled people finding quirky romance, the self-deprecating shtick, a little bit of dark comedy and crime—but its older-man-younger-woman fantasy is troubling, especially in light of the filmmaker's recent controversy.

Here's a refresher: Last year, during the Woody Allen tribute at the Oscars, Ronan Farrow unearthed a controversy that hasn't been touched since the '90s, tweeting, "Missed the Woody Allen tribute - did they put the part where a woman publicly confirmed he molested her at age 7 before or after Annie Hall?" A few weeks later, the aforementioned woman, Dylan Farrow (Allen's adoptive daughter with ex-wife Mia Farrow), penned an open letter about Allen's sexual abuse on The New York Times. A week later, Woody Allen responded, denying the charges. Since then, Allen hasn't been prosecuted, the issue has mostly been kept hush-hush, and Woody Allen is still out here making movies.

It's difficult to say who's wrong or right in a case like this, and I don't want to blindly point fingers at anyone (though my tendency is to always side with the victim). But it's certainly not something I can easily shrug off either, as I hesitantly walk into a Woody Allen movie. As much as I'd like to, it's difficult to separate the person from the artist. Even if Woody Allen is a terrible person, am I still allowed to enjoy his movies? What about Roman Polanski?

Many reviews of Irrational Man (surprisingly in praise of it) have ignored Woody's personal drama altogether, which I can understand. Let's just analyze the art on its own, right? Ok, let's try...

Woody Allen, despite having once created classics like Annie Hall and Manhattan,  regresses to a pseudo-intellectual film student state of mind on his latest movie. (He shallowly throws around Dostoyevsky and Simone de Beauvoir like a flexing college freshman.) The film's titular irrational man is Abe (Joaquin Phoenix), a philosophy professor, who, despite his temperamental personality, drinking problem, and protruding gut, is irresistible to beautiful women. The two main beautiful women in question are Jill (Emma Stone), his young and doting student, and Rita (Parker Posey), a fellow member of the faculty, who steps out on her husband and has an affair with Abe. Because, you know, so brooding and brilliant and irresistible!

The film ventures into dark comedy when Abe decides to commit a murder, for the random good of a stranger (whose conversation he overhears at a diner). The murdered stranger happens to be a judge, though, which, in regards to Allen's real-life court battles with the sexual abuse case, is admittedly disturbing. It makes looking at the film as a standalone—without letting his personal life clouding it—rather difficult.

But of course, this being a Woody Allen film, even the murder is a little bit screwball. 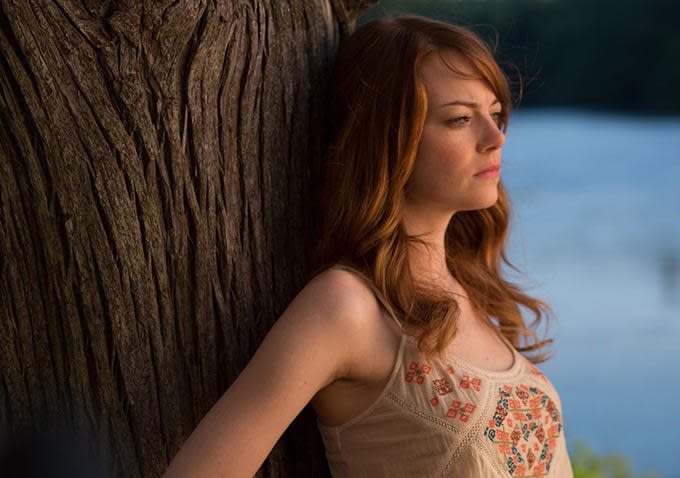 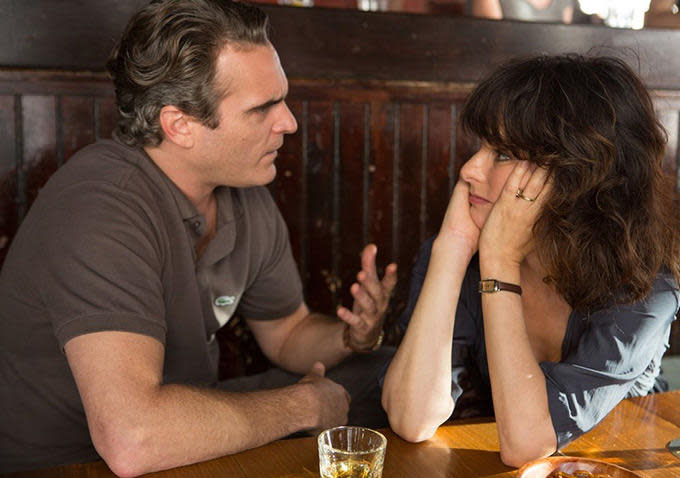 Though Allen gives narrative voice-overs to both Abe and Jill, his female characters are sadly (yet unsurprisingly) robotic and one-dimensional. Emma Stone's character is especially frustrating. Her lines include "I love when you order for me" (no, really) and "I hate that you think that I'm practical!" in an effort to become one of Allen's favorite female tropes: a Manic Pixie Dream Girl. Her sole purpose in the story is to serve Abe—and what a thrill she is (oh hey, his sexual impotence is no longer an issue)—and her dialogue does not much other than praise him. He's so smart, he's misunderstood, he's done every drug but hates them all, did you know his mom committed suicide by drinking bleach? He's so tragic and attractive, etc. Even at the end (mild spoiler but not really), Jill, in voice-over, states that even though she had this traumatic experience with a terrible man, her new boyfriend helped her get over it. Isn't that precious!

It's not just that Woody Allen can't seem to stop making the same mediocre films. With Irrational Man, he plays out uncomfortable fantasies, making it damn near impossible to separate life from art. As a viewer, it's at best exhausting. Maybe it's time he hang up his hat.