Early last week, NBC announced that after three seasons, Hannibal was getting the ax. The Internet blew up with outrage—why is NBC canceling its best show? Why can't we have nice things? How are we going to fill this Hannibal-sized hole in our hearts?!

NOW IT ALL MAKES BLOODY SENSE. Our girl Rihanna killed him. What a turn of events. In her new video, "Bitch Better Have My Money," Riri tapped Mads Mikkelsen A.K.A. DR. HANNIBAL LECTER as THE BITCH, and holy shit, it is unreal. If you haven't seen it yet, do yourself a favor:

Obviously, this resulted in the Internet flooding itself with Rihanna/Hannibal jokes. The main theories are 1) Rihanna canceled Hannibal by killing its titular character and 2) Rihanna is bringing back Hannibal. God, I hope it's the latter. Rihanna should create a TV network just to revive Hannibal. And then she should star in it. She should play Clarice. She should play Hannibal, I don't fucking care. Anyway, here are some of the best Rihanna/Hannibal tweets:

Who knew @rihanna would be the one to finally catch Hannibal instead of Will Graham? #BBHMMVideo

DOES THIS MEAN RIHANNA WATCHES HANNIBAL WOW just when you think she can't get more perfect pic.twitter.com/lGJxzgAJoL

Rihanna's new video is a very elaborate campaign to save Hannibal.

NBC canceled Hannibal because @rihanna didn't get her money #BBHMM 💰 💰 💰

Also, let's take a moment to appreciate this still of Hannibal with MONEY GUNS in "BBHMM": 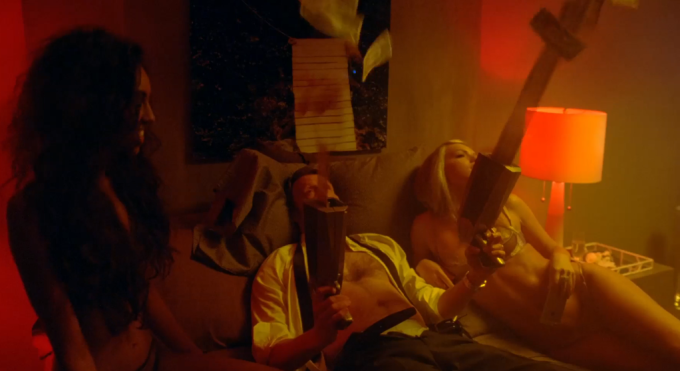