This post contains mild spoilers from tonight's episode of True Detective, so if you haven't seen it, be careful out there.

Yeah, that just happened. I've seen next week's episode of True Detective too but let's keep it to what we just saw tonight. (and last week). True Detective may have just laid down the best part about its polarizing second season with that shocking ending to episode two. Nic Pizzolatto giveth and he taketh away. What this means for the season as whole is still up in the air, but the abrupt departure of walking trainwreck Ray Velcoro is the hard shake the world needs to finally appreciate a truth that's always been in front of us: Colin Farrell, is a genius.

True Detective reupholsters careers. Word to Matthew McConz, who pulled off the illest Hollywood career 2.0 rebirth this side of his fellow phoenix, thespian-turned-action-hero Liam Neeson. But for this season's breakout star—and yes, as the fantastically named Ray Velcoro, your man Colin is already the breakout one episode in—it's not about showing audiences a new side of his acting chops. Colin Farrell already broke out. Then he burned out. Then he came back. Minimal attention was paid. Now, with Home Box Office as his center stage, it's time the god recaptured his destiny to be That Dude. Colin just rose again (?).

The Hollywood machine had this dude set to take the A-list reins, but even if you peruse his filmography pre-fall-off, there are only flashes of brilliance, never a true moment when he was the unmitigated Best Actor Alive. The less said about the half-baked blockbuster mess that is SWAT, the better. The brightest spots are supporting roles in movies like Minority Report. He shines, yes, but he's still only playing Pippen to Tom Cruise's Jordan. His unhinged turn as maniacal assassin Bullseye is the best thing about Daredevil but again, he's not the star of the show. Then came the abominable Alexander, followed by a stint in rehab not long after, and the ride was over before it even began.

Of course, Colin got his head back on. But he's yet to come back like Jordan Robert Downey Jr., wearing the 4-5. Amidst several above average turns, namely playing neurotic, nervous wrecks in In Bruges and Seven Psychopaths, the homie has yet to achieve a true Moment. And his career is still as erratic as ever. One year he's widening his impressive range with a scene-stealing turn as a balding, fat prick in Horrible Bosses and hamming it up as a vampire in the enjoyable Fright Night... and the next he's leading the Total Recall reboot, which was deservedly forgotten-on-arrival. 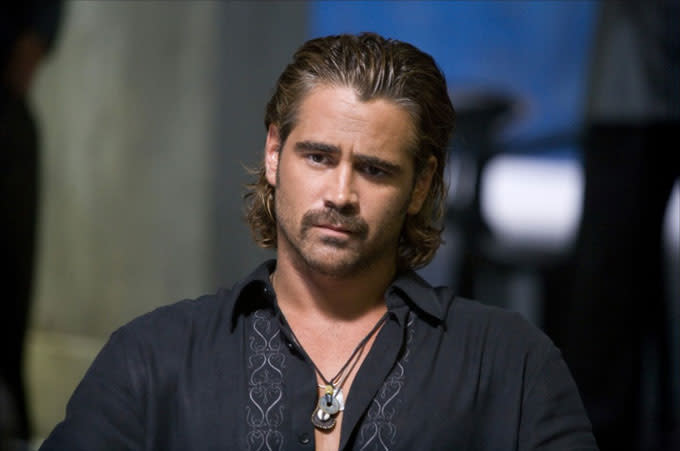 But this is his year. And all it took was one—ONE—episode of True Detective to set things in motion.

Many in the TV community ridiculed True Detective's decision to follow up McConaughey and Harrelson's blockbuster duet with a quartet that included a failure to launch, a deposed king of comedy, the burnout A-lister in discussion here, and Regina George. Critics have largely turned on the show in general, as the lightweight ridiculous persona of creator Nic Pizzolatto has rendered his writing pretentious and hollow, to say the least. Even after the three I've seen, it's unclear if his show will swerve away from the sophomore slump. But if there's anyone who excels at making lines, plots, and whole movies that shouldn't work fucking soar, it's Colin. This is the same guy who made a film about a sleazeball trapped in a phone booth by a crusading sniper watchable. Michael Mann's Miami Vice is brimming with the same macho, testosterone-soaked posturing and dialog that True Detective is indicted for—undercover, accused by a criminal for being unknown in the underworld, Farrell's Sonny Crockett retorts "My mommy and daddy know me."—and yet, in Colin's hands, it's awesome.

Actors who couldn't make it work in theaters flocking to TV to keep their career afloat is the norm these days. But this is True Detective—a one-and-done affair (perhaps even 25% and done after tonight?!). Colin Farrell isn't trying to cultivate a late-career stint on the small screen, nor is he showing new range. He's just reminding you of his special set of skills in the best forum he's had since Vice. A high-profile, all-eyes-tuned-in vehicle. He stole the show off the rip, by the end of hour one presenting a broken man as much of a burnout as he is a livewire, RIP to Assssspen's dad, a brooding old-world macho man as much as he is a contemporary brooding emo. Ray is a Trash Detective; Colin is the true star. And this is only phase one.

By fall we'll be blessed with The Lobster, a sci-fi/romance that sounds like Her meets The Giver—in a dystopian future, singles have 45 days to find a mate or else... dire, dystopian type shit happens. It already won third place at the Cannes Film Festival. We the people love a comeback. And for Colin, the pieces are finally, finally lined up. He's always had the skill set—now he's just finally ready to take the mantle Hollywood was ready to hand him ten years ago.

Frazier Tharpe is a staff writer for Complex. He welcomes judgment. Follow him @The_SummerMan.