Aloha is by no means the first problematic white people movie Hollywood has released, but OH MAN Aloha is white as hell. Cameron Crowe's latest dramedy—is that what this is?—has a star-studded cast and despite its bulging talent, it's severely lacking in... diversity. Just look at this cast list: Bradley Cooper, Emma Stone, Alec Baldwin, Rachel McAdams, Bill Murray, John Krasinksi, Danny McBride.

IN FACT, JUST LOOK AT THIS IMDB PAGE: 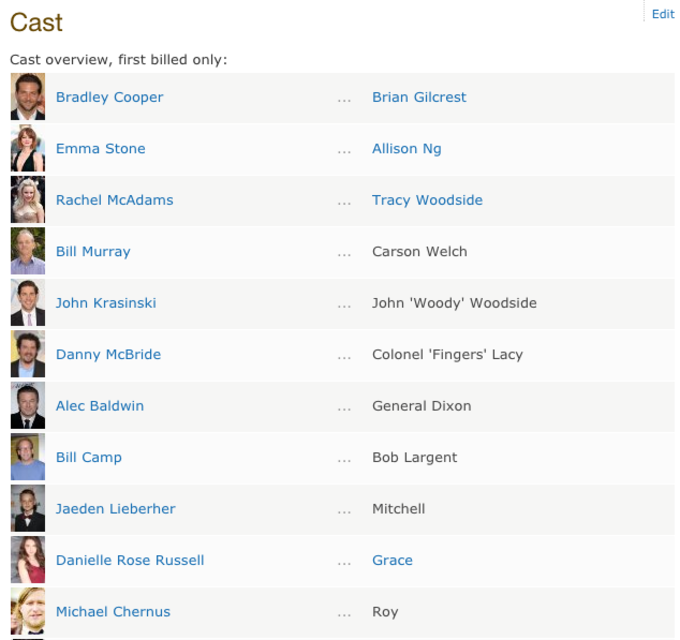 Though this isn't the first time Hollywood has been shockingly pale, it is a movie that takes place in, and revolves around, Hawaii, a state whose population is 60% Asian American Pacific Islanders. Weirdly, Crowe seems to think that Hawaii is, like, 99% white. If only he didn't already have a movie called Vanilla Sky.

Unfortunately, that's not the only thing wrong about Aloha.

Ahead of the film's release this weekend, Sony shared the first eight minutes of the movie, and it actually gives a solid setup while introducing all the main characters. What that also means is we get a pretty good idea of how terrible the whole thing is.

In the intro clip, we find out (via voiceover) that Bradley Cooper's character is a space nerd who ends up working for billionaire Bill Murray on some NASA thing (he blames a bunch of other white people for monopolizing the market during the 2008 economic crisis). After getting injured in Afghanistan, he finds his second chance in Hawaii doing some satellite shit I don’t understand. The movie wastes no time flying the characters into the main location of the film. "I'm excited about this very important gig!" Bradley Cooper exclaims like the excited white man he is.

But since this is a Cameron Crowe film, there are some other complications—mainly of the heart. As soon as he arrives in Hawaii, Bradley Cooper has to face his ex, played by Rachel McAdams. As Cooper spots McAdams, Danny McBride says, "Of course, the old ex-girlfriend. Pause for the memories," like he's just straight up reading the director's notes. Danny McBride also delivers this classic line that's basically Eastbound and Down material: "I'm so powerful, I'm feeling erect just thinking about it." Stop.

The ex-girlfriend isn't too happy about seeing Bradley Cooper. Crowe makes this extra clear by making McAdams initiate a conversation with, "Hey, I refuse to talk to you." She LITERALLY goes out of her way to say this to him. Cooper responds with awkward flirting ("Will you stop getting more beautiful?") and it is just so painful to watch. For some reason no one gives a shit about Emma Stone, and everyone just ignores her. I don't know how that's realistic at all, but okay.

Despite the star power behind Crowe's latest flick, Aloha has already been completely trashed by critics. Indiewire called it "shockingly bad," though nothing about its badness is really shocking to me. We should have known when those Sony emails leaked, which revealed ex-chair member Amy Pascal bashing the film: "I'm never starting a movie again when the script is ridiculous. I don't care how much I love the director and the actors." She also wrote, "It never ... Not even once ... ever works." (Where's the lie?)

Native Hawaiians have taken issue with even just the title of it. Hawaiian activist Walter Ritte has said, "If you have a romantic comedy about the military in Hawaii ... but a title that says 'Aloha,' I can only guess that they'll bastardize the word. They're taking our sacred word ... and they're going to make a lot of money off of it." Meanwhile, Ty Kawika Tengan, chair of the ethnic studies department at the University of Hawaii in Manoa has said that the film uses Hawaii as "the verdant background for white fantasies." To be fair, Aloha isn't the only movie to have used Hawaii as some white person tourist spot for rom-com purposes (see: Forgetting Sarah Marshall, 50 First Dates).

Daily Beast reports that Stone's character is "one-quarter Chinese, one-quarter Hawaiian, and one-quarter Swedish, making Aloha the first major studio movie to explain to white folks how you pronounce the name "Ng" (like "'ring,' without the R")." Oy. I love Emma Stone but come on. It seems insane that this is a thing in 2015. Cameron Crowe, do you need me to introduce you to some Asians? Have you learned nothing from Breakfast at Tiffany's? It's offensive. And it's offensive to let the talents of many Asian actors go to waste.

Plus, it's just plain rude pulling this during Asian Pacific American Heritage Month.