Liam Neeson: carries a giant stuffed panda bear around in Taken 3 because, well, when you’ve already been nominated for an Academy Award, multimillion-dollar paychecks outweigh dignity.

That stuffed panda: the only memorable thing in Taken 3.

Granted, it doesn’t take much to overshadow everything else in this third Taken installment, the most superfluous Hollywood sequel since, take your pick, Horrible Bosses 2 or Dumb and Dumber To​.

More visibly enthused in last year’s superior "60-year-old American with an Irish accent kicks ass and talks defiantly into telephones" movie A Walk Among the Tombstones, Neeson walks among the motions in this uneventful, please-let-it-be-the-final Taken sequel. A telling detail in Taken 3's worthlessness: Nobody’s ever actually "taken"—a better title would've been Greatly Inconvenienced. Someone major does die, however, within the first 15 minutes: Lenore (Famke Janssen), the ex-wife of Neeson's ex-covert op character, Bryan Mills. (That’s not a spoiler, it’s right there in the commercials.) Her death gives Taken 3 its own formulaic identity—whereas the first two blatantly cribbed from Charles Bronson movies, Taken 3 is a broke man’s The Fugitive.

After a brief reintroduction, where he gifts his college-aged daughter (the 30-year-old Maggie Grace, as worthy of The Room as ever) with that aforementioned plush panda for her birthday, Neeson’s particularly skilled character Mills spends most of the film on the run. He’s fleeing from a diligent inspector (Forest Whitaker) whose primary clue as to whether Mills is innocent or guilty of homicide is a warm bagel. Indeed, a bagel—by Taken 3's climax, Mills is a bialy away from the electric chair. Will the cream-cheesy clue somehow incriminate the innocent Mills? Or will that toasted and delicious piece of evidence point him towards the more likely suspect, Lenore’s shady new husband, Stuart St. John (Dougray Scott)? Or will the slumming-it Whitaker coast through Taken 3 doing little more than nibbling on circular Jewish bread?

Regardless of the outcome, you won’t care. (The answer: Whitaker clearly loves bagels.) 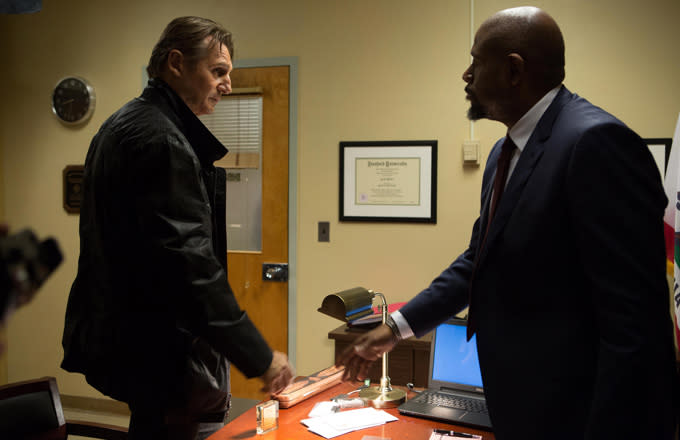 The Taken movies have never been about the characters. It’s hard to sympathize with people who consistently make idiotic decisions (i.e., throwing live grenades around Istanbul in order to be found, in Taken 2). There’s never been a notable villain for audiences to either fear or project secondhand revenge fantasies onto. Taken’s characters are merely vessels through which Neeson can let off both steam and bullets. From the beginning, Taken’s been about the unexpected and once-fun spectacle of the once-regal Neeson one-upping younger bruisers like Jason Statham. The first movie—a $25 million production that earned $145 mil back in 2008—thrived on that, affording Neeson the opportunity to rage in a brainless string of bare-knuckle fight scenes, bombastic shoot-outs, and frantic chases. And he, both figuratively and literally, killed them all.

By now, the thrill of his elder ass-whooping is gone. Those other aged stars who've tried copying Neeson's reinvention model, like Kevin Costner, have diluted the shtick. Taken 2, also directed by Olivier Megaton, lazily retreaded the same ground. When he starts breaking liquor bottles over the heads of Russian criminals midway into Taken 3, there’s no impact. If you’ve seen Neeson karate-chop the throat of one anonymous Eastern European goon, you’ve seen him karate-chop the throats of all anonymous Eastern European goons.

A big part of what made Taken so enjoyable was its oh-shit factor, that all-important key to executing great action cinema: watching something made by someone who’s genuinely trying to wow the audience. There's none of that in Taken 3. Megaton, despite possessing the most action-apt name this side of Vin Diesel, shoots stunts and fights with no discernible edge—he’s as nondescript as the thugs meeting Neeson’s punches head-on. Furthermore, he's now working in a post-The Raid 2 world, one where indie Indonesia-based director Gareth Huw Evans has rewritten the action genre’s rules. You can no longer rely on snappy one-liners and tough-guy A-listers to sell the carnage. With his avoidance of CGI and impeccably raw and elaborate fight choreography, Evans has evolved big-screen action the same way the young Rakim enhanced lyricism back in the late-'80s.

The Raid 2 biggest oh-shit moment is a breathless and amazingly over-the-top car chase that’s largely shot from inside the speeding vehicles and whose oh-shit quotient increases by the second. Taken 3 has a similar car chase sequence, it doesn't deserve to clean the broken windshield glass off of The Raid 2’s concrete. It's proof that Megaton isn’t even the Rob Base to Evans' Mr. "Paid in Full."

Liam Neeson and Denzel Washington Should Retire Their Guns