In August 1995, I was a month away from turning eight. I'd just picked up a habit of taping any page of Nintendo Power to my wall that featured pictures of the upcoming Nintendo 64 system and the Virtual Boy, the company's virtual reality console that had just been released.

What you lack in saved-up lunch money as a kid you make up in cards to Santa Claus, and I went above and beyond that year. Virtual Boy was a childhood fantasy materialized, my chance to be in a game (or so I thought). It was also the first time I sensed that the future of technology was something to be excited about. Then it came crashing down.

Virtual Boy became one of the biggest console flops of all time, and virtual reality suddenly went from cool to mundane faster than one of Mario's fireballs. (I still haven't had my hands on one to this day.)

Virtual reality devices largely disappeared from consumer technology markets after Nintendo's failure. Tech companies focused on other things, like merging phones and computers into devices that fit in our pockets, 3D experiences in movie theaters and televisions, and refining graphics and motion controls in gaming consoles. Making a device that fits on your face? Wearing that couldn't be any more un-cool than showing your Tinder date your old comic collection.

All that's set to change in the coming year, where we'll likely see the launch of a new breed of VR technology, led by the Oculus Rift​, that just might bring VR back from the dead. If you don't take my word for it, a piece of cardboard from Google might be enough to reel you in. 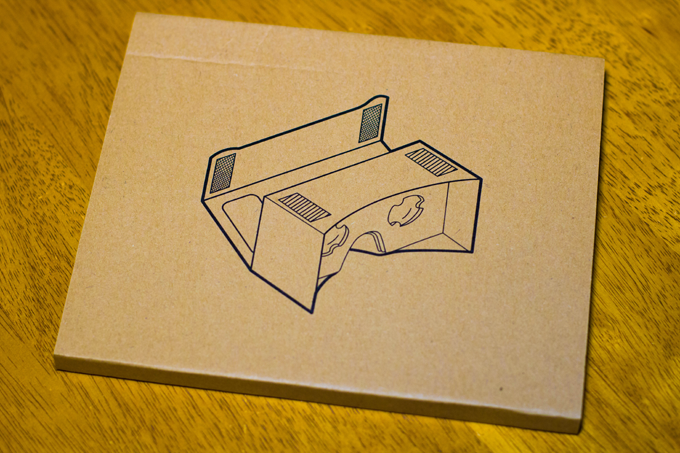 Google Cardboard is a simple contraption made of a rubber band, magnets, Velcro, lenses, and, yes, cardboard. It gives you a taste of VR for about $20 a pop, or even less. It's a cheap ticket if you already have a $200+ smartphone that you'll need for the ride. The Cardboard kit uses a smartphone as its technological guts, and with the right apps, you can experience VR without having to fork out gobs of money for an expensive device.

Since Google designed Cardboard, you'd think you could buy one from directly the company. You can't. Google made the schematics and assembly instructions available on their website for free, so you can do your best MacGyver impression and make one yourself if you pick up the parts. Or, you can purchase it from one of a few third-party companies that are selling it pre-made and in various colors—more than 500,000 kits have already been sold.

After some searching, I bought the Cardboard Kit With NFC from I AM CARDBOARD for $24.99 from Amazon. Upon arrival, it looked like a slab of packaging that could barely fit an issue of National Geographic.

The package is split into two detachable sides. One side contains the lenses along with a series of scattered numbers, and the other displays illustrated, tiny, indecipherable instructions. Luckily, on the portion of cardboard that would become the goggles, there were guides to match numbers with a corresponding part, like sliding a black tab marked "1" into an opening marked with the same digit.

It took some flipping and turning to make sure this was what I was supposed to do (and some praying because I wasn't entirely sure most of the things I was folding were supposed to be folded). There was some dust from the packaging left on the lenses that I gently brushed away, but I had all it done in about 10 minutes—which is probably a record for the slowest time putting one of these things together.

I slid my smartphone right into a flap that closes together with two pieces of Velcro. Not a bad fit. 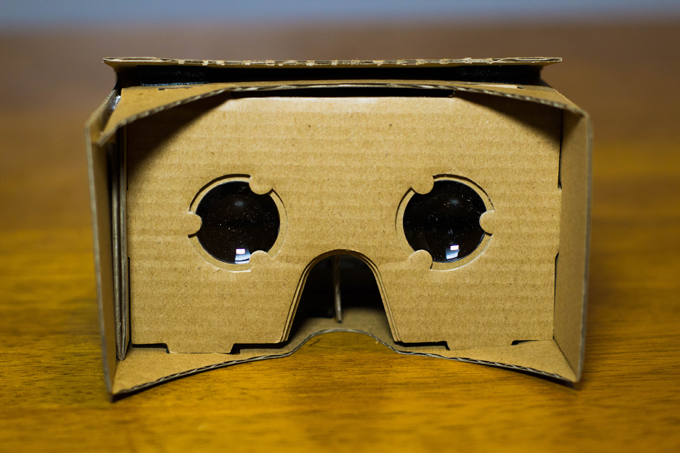 Kinda cool for a piece of cardboard, right? Hell yeah it is. Too bad you end up looking like you're plugged into the Matrix while using it:

Google doesn't manufacture Cardboard kits, but they do tailor apps to work with it. Naturally, that means iPhone owners get the short end of the stick. Android users have the official Cardboard app and a few dozen others. There's a virtual Paul McCartney performance, a Hobbit-themed app that takes you through parts of the Shire in Middle-earth, Google Street View, and a Jack White VR concert. iOS users don't have any official Cardboard apps, but they haves some options at their disposal by way of apps made for a different device called the Durovis Dive, which works similarly to Cardboard.

The handful of free apps that were made for the Durovis Dive are available in the App Store, and a couple are actually entertaining enough to keep you occupied on a lazy Sunday: Dive Zombie, a shooter that takes place in a dark area with approaching zombies; Moorente, another shooter where you blast ducks out of the sky; Dive City Coaster, a roller coaster ride; The Height, a puzzle game I didn't really like or understand; and Stereoscopic Tunnel Effect, which was probably made with stoners in mind.

I fired up my Cardboard on an early Wednesday evening and downloaded all five apps. I used my iPhone 5S, but the larger the phone you use, the better. Since the 5S has a 4-inch display, I can see the ends of the left and right sides of the screen when looking through the viewfinder.

Dive City Coaster was the first app I tried, and even though it's simple—you're on a roller coaster and all you do is look around—the sensation of turning in any direction and seeing the city and tracks was nuts. It was, finally, my first step into VR, almost two decades after missing out on the Virtual Boy. When I look back, I realize Nintendo was stretching its definition of "virtual reality" with Virtual Boy, and most of what I hoped was possible with it was in my imagination.

This is what Dive City Coaster looks like outside of the kit. The app displays two separate frames showing a slightly shifted version of the same image: 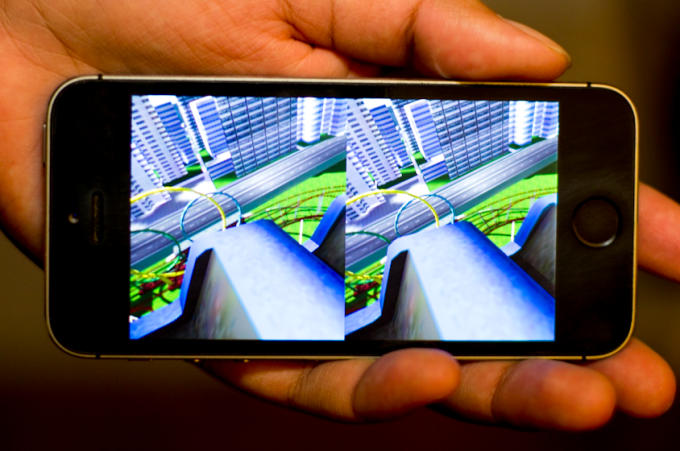 Cardboard works by using your smartphone's gyroscope and accelerometer to keep those two frames on track with your head, giving you the VR effect through the kit's plastic magnifying lenses. Throw on some headphones and slip it through openings in the kit and the sound slightly enhances the experience.

I tried out Dive Zombie next, and had to stop in just a few minutes because I started to feel dizzy. Dive Zombie puts you in a dark field where huge zombies plod toward you. You're armed with a gun that automatically fires about once every four seconds. Since you can't walk or move in different directions, you're left in one spot—all you can do is whirl around and do your best to aim.

I needed to give my eyes a break, so I went to my mom's house to see if she wanted to give it a spin. She tried Moorente, which is essentially a VR version of Duck Hunt. "Dude! From freakin' cardboard?!" she screamed, even though I don't think she knew what the point of the game was yet. Shortly after that, she jumped as one of the ducks she shot out of the digital sky fell next to her. "I'm killing a lot of them!"

If you haven't guessed it, Cardboard is a gateway device. It's meant to get you one step closer to believing that the upcoming technology can more closely live up to what was promised so long ago. Virtual reality has the potential to be used for more than just shooting ducks. It may transform the entertainment industry, from movies to concerts (as we're already seeing) and sporting events. And that'll only be the beginning. "Imagine enjoying a court side seat at a game, studying in a classroom of students and teachers all over the world or consulting with a doctor face-to-face—just by putting on goggles in your home," Mark Zuckerberg said in Facebook's announcement that it had purchased Oculus Rift for $2 billion early last year.

Next up for my mom was the roller coaster app. As soon as it came on, she started laughing, "What the freak!" She handed it back to me, paused, and then went to take it back from my hands: "I wanna try it again!"

The future looks bright once more.